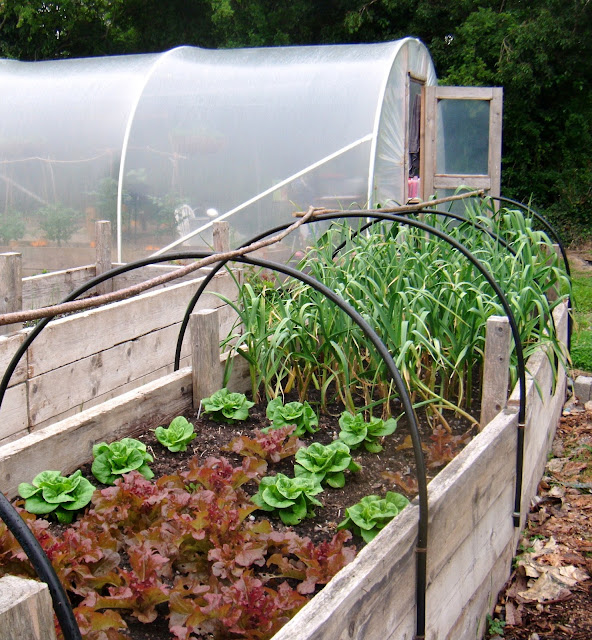 As money grows tighter, people increasingly turn to gardening and other self-reliant hobbies: Grow-it-yourself clubs are popping up all over Ireland, gardening programmes seem to fill the television schedules, and local farmers are leasing their fields to allotments.

As pleased as I am to see so many rows of cabbages and potatoes, though, I don’t want to see people rely too heavily on only a few crops. It’s understandable, of course, for gardeners to start with the easiest or most familiar plants, as well as the ones they know how to cook. Here that means cabbages and potatoes, in my Missouri hometown that means tomatoes and peppers, and where you live it might mean something else.

Relying too much on only a few varieties of a few plants, though, makes for a very fragile kind of self-reliance. Eat a surfeit of one food and your health declines; meet the wrong caterpillar or fungus, a summer too hot or a winter too long, and much of your food is gone. The Irish did that once with potatoes, with disastrous results, and Americans began eating mostly corn – corn-fed beef, high-fructose corn syrup and more -- around the time they gained a global reputation for obesity.

Most of us, though, have little idea how many edible plants are all around us, and how many could fill our salad bowls or soups. Even if we restrict ourselves to the minority of plants that have become domesticated crops, we typically recognize only a few varieties of each – the ones bred recently for fossil-fuel transport, not for taste, health or your climate.

Take the colour, for example – most of us have never seen green oranges, purple carrots, striped beets or blue potatoes. Or look at breed names -- most of us have eaten Johnagold or Green Delicious apples, perhaps without knowing what they were called, but I have never had Seek-no-Furthers or Belle-de-Boskoops, and you probably haven’t either.

Even many ordinary vegetables have become widely unrecognized. When I was in charge of a magazine in America, we made an arrangement with a local CSA to get a weekly box of whatever was in season. I waited until everyone else had their share and took the rest home – which meant I took most of it home every week, because my colleagues had no idea what to make of the vegetables or what to do with them. Some of these people were environmental activists or vegans, but they stared quizzically at the kohlrabi, fennel, mange tout, swedes, daikons, parsley root, beetroot or sunchokes as though they were specimens from an alien planet.

Still, I didn’t grow up knowing many of these crops either, and had to learn them over time. When we moved here, for example, my mother-in-law introduced me to celeriac, a celery relative bred not for its stalks -- which are edible but foul-tasting, I can assure you – but for its bulbous root. Ours can grow as large as a human head, and can be left in the ground until needed or transferred to boxes of sand in the shed. My mother-in-law usually cooked them like potatoes, but I find them great raw, finely grated like parmesan and mixed in a spicy lemon dressing.

As another example, we grew scorzonera last year, a yellow-flowered dandelion relative that seemed to fall out of favour after the Victorian era. Its black roots taste great peeled and either boiled, steamed or stir-fried. Its cousin salsify has blue flowers and white roots, but can be treated similarly. We also grew chicory, not to harvest at the time, but to transplant to earth boxes in the shed in winter and force its blanched leaves upwards.

Acquaintances of ours experiment with other roots and tubers: yacon and occa originated in the Andes Mountains alongside the potato, but spuds became the staple food for millions while the first two continued to be eaten mainly by Incas. Sometime soon, though, we really must experiment with yacons, which can be eaten raw and, we are told, taste like sweet radishes.

Even outside the garden beds, in the woodland and hedgerows, you can plant or foster hardy wild crops that most people pull out as weeds. Good King Henry grows naturally in the forest understory here, and tastes like spinach – it grows wild here but not enough, so we are sowing its seeds in our garden this year. Fat Hen runs rampant here and makes a good addition to any salad, as does jack-by-the-hedge, sorrel, oxlip, cowslip and primrose. Nettles can be cooked like spinach, fermented into kimchi, juiced like wheatgrass, dried and powdered like herbs.

No matter how damp or chilly your climate, it might support more subtropical plants than you realise. When I first visited Ireland, I was shocked to see so many palm trees: the air rarely goes above room temperature, but it so rarely freezes (until recently) here that they survived along the coast. In the same way, olive trees, tea bushes and wine grapes grow in the south of England, and once the greenhouse was invented, gardeners here grew pineapples, peaches and melons.

Nor are all such fruits as exotic or tropical as many people believe. Most people think kiwis come from the South Pacific; in reality the name was a 1960s marketing ploy, a Cold War rebranding of the Chinese gooseberry. They too grow in this damp and windswept country, perhaps not as big as the ones in supermarkets but just as tasty --- and without using their own weight in fossil fuels to get here.

We will never approach resilience unless we wade into the vast pool of little-known and rarely used plants. This time of year, as those of you in the Northern Hemisphere are buying seeds for the spring, consider devoting a piece of your land for experimenting with new crops and new varieties. Not all your experiments will work, but some might prove easier, healthier, more pest-resistant, tastier, or more suited to your particular patch of the landscape that what you are planting now.
Posted by Brian Kaller at 22:24

Far too much land in Ireland is given over to dairy and meat due to the massive subsidies provided to those industries (up to 70% these days). A severe overhaul of the Common Agricultural Policy is sorely needed.

Polytunnels may not be as attractive as a monochrome green field but, acre for acre, litre of water for litre of water, they can produce far more food and free up land for forestry, tourism and re-wilding.

We can grow a surprising variety of foods in Ireland. We grew chick peas (garbanzos) last year, for instance. We have grown oca, though I’m not a fan of them. Our chillies are fabulous and of many types. We have grapes and some luscious yellow raspberries. Salad grows throughout winter in a polytunnel.

And tomatoes! From our small lean-to ‘conservatory’, gosh, masses of them, of all sizes and varieties. Yellow, orange, purple. Oh, and red.

Another David -- Holmgren, the creator of perma-culture -- once calculated that the average city could feed itself solely from what it could grow on suburban lawns and other extra spaces. That's theoretical, of course -- putting into practice would never be the same as on paper -- but it shows how much we could use and don't.

And we can grow an amazing number of things on this island - when I visit old manors, I see the remains of kitchen gardens with small enclosures on one side that, apparently, were melon boxes. They have a slanted roof once covered in glass, and probably had horse manure under the soil to give off heat from below. In Britain gardeners would cultivate pineapples, and display them as a centerpiece.

What part of the country are you in?

Lawns! What is the attraction? It costs money to maintain and is useless for all but a few days' lounging. We have a neighbour with about an acre of it, south-facing. It's cut every week from March to October since they moved there in the 1970s. Not even a flower in sight. The tons of spuds that space could have produced...

We're in County Clare, a place they call Spancil Hill. We're lucky to have a piece of land with a long stone wall on the north border, against which we have south-sloping raised beds and espaliered apple trees.