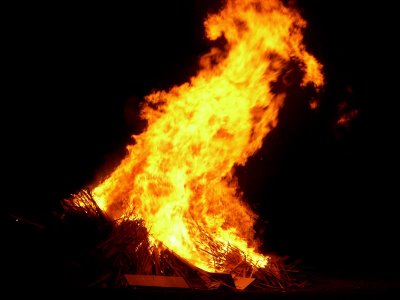 We first arrived in Ireland a few days before Samhain -- Hallowe'en -- when The Girl was still a baby. I didn't realise then that this was the day for setting off fireworks here, like Independence Day in the USA, New Year's Eve in Germany or Guy Fawkes night in the UK.

Let me tell you, there's nothing a jet-lagged baby loves more than artillery outside the window.
Posted by Brian Kaller at 22:02 No comments: 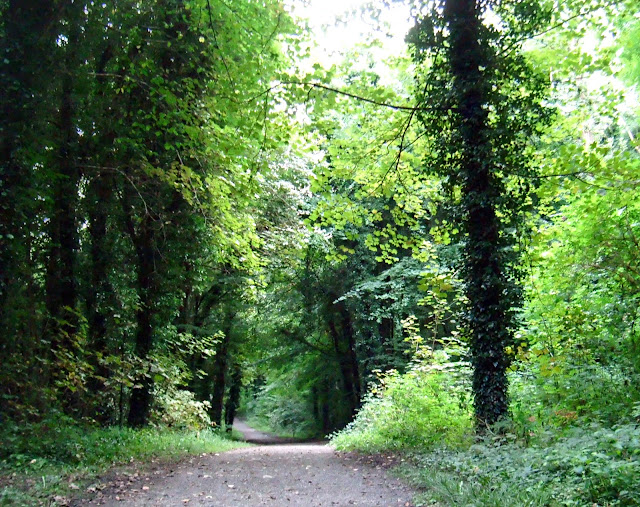 The Girl knows that, only a brief time ago - in the thousands of years -- the whole world looked like the Serengeti does today, with massive animals everywhere and ancient trees. She knows that a short time ago islands near us had Giant Swans, that my native Missouri had sloths the size of elephants, and that the islands here once saw the Great Auk and the Irish elk.

She knows that almost all the great animals are gone now, killed by humans. She knows the Oldest Story, Gilgamesh, begins with the felling of the great trees, and that's why Gilgamesh's land is now a desert. She knows that there are only a few fragments of this World Gone By still alive, places where the soil has not been harvested away and the landscape has not been scoured. She knows we have to protect them from our own kind.

"But there are so few of them left," she said the other night, "What happens if they go too?"

It will be sad for us, because we won't get to see them anymore, I said. But it won't be the end for the Creation; it has been remade many times before. We are part of its story, not the other way around. Our job is to become the heroes of the story. 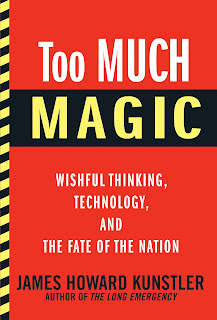 Almost eight years ago I interviewed author James Howard Kunstler for a magazine cover story, and the publisher didn’t want to run it; I had just written my own cover story on the peak and decline of the world’s oil supply six months earlier, and they didn’t want to go over the same ground again. I fought for and won the cover story, though, for I wanted to publicise issues like peak oil, climate change and other crises, yet struggled to concisely express the way they could build upon one another to undermine the basic life-support systems of modern society.

And then I read Kunstler’s book, with its haunting title: The Long Emergency.

At the time, issues like peak oil were mainly relegated to arcane web sites that also featured alien abductions and September 11 conspiracies. Climate change was slightly better-known but still marginal in the USA. The rare writers who discussed these issues treated them in isolation, without considering how multiple crises would hit an indebted and unhealthy society from many directions at once. Finally, everyone tended to think of the result as a sudden apocalypse, and not something long.

Kunstler brought these issues together, and as close to the mainstream as they have ever come; only his cumudgeonly wit and avuncular charm could bring them to late-night chat shows and national radio networks. The very phrase “long emergency” has become a handy expression in preparedness circles, like “black swan” or “perfect storm,” even by those who don't know its origin.

Of course, mainstream culture has never been very receptive to such messages; images of “the future” usually come with the same flying cars and domed cities that have remained ten or twenty years away since the 1800s. The myth of progress has been deeply imprinted on us, and colours our view of history, culture, evolution, and any number of other fields. Mainstream culture remains invested in the belief that we are getting better, faster, and stronger every day, and that this trend will be endless, beneficial and inevitable.

My friends who are Christian traditionalists, social progressives, or libertarian conservatives have their own variations on the theme, but none have abandoned it. Some imagine progress to be a 20,000 Dow, others gay marriage and still others quantum computers, but everyone wants us to move further forward, whichever direction they imagine that to be. Any course change is assumed to be derailing our social and technological evolution, a call to get “back on track” and continue the transformation we saw in the 20th century. The Long Emergency has something to displease everyone.

I found in Kunstler a kindred spirit, and reading his books as I rocked my baby daughter to sleep, I wondered how much of the Long Emergency we would see before she was grown. I wrote in one early article that I doubted she would be hunting elk through an abandoned city, or that she would be flying a jetpack to work, or any of the other science-fiction scenarios that form the pillars of our mental architecture. I leaned towards Kunstler’s vision of economic crashes, escalating weather crises, wildly unpredictable fuel prices, agricultural failures, riots and violent revolutions – and so far, he’s been on the money.

It’s strange to realise how much of our recent social landscape – Hurricane Katrina, the actual oil production peak, the economic crash – were still in the future when he was writing. He even hit the jackpot with some of his wilder claims – a return of open-ocean piracy, for example, or World Made By Hand’s posited “Mexican flu.”

The worst that can be said for Too Much Magic, James Howard Kunstler’s long-awaited follow-up, is that it delivers a reshuffled anagram of everything he has said in numerous books, articles, blogs, speeches, podcasts and interviews. The unconverted probably will not read it, and it’s not the best starting point anyway.

Kunstler seems aware of this, so Too Much Magic is, if anything, an even grumpier jeremiad than his previous works, as though directed more to the choir. He waxes thoughtful about the deeper cultural sickness evident in ghetto fashions and Disneyland’s landscape. He enjoys flaying his longtime nemeses – Ray Kurzweil and Amory Lovins – and takes special aim at utopian futures, the "magic" of the title.

He brings his usual adjectival pile-ups, like “hyper-patriotic pugnacious militarism.” He delivers his trademark bon mots, as when referring to Ronald Reagan’s “aw-shucks boobery,” or the belief that “the planet is a bonbon with a creamy nougat centre.” The chapter pages reveal his own interests, for he devotes far more pages to the shenanigans of stock market brokers as he does to the potentially greater disasters from climate change. Like so many others, he can be too eagerly dire at times, implying years for social changes that would probably take decades.

Such criticisms, of course, come from one who has followed his work for eight years; someone coming to these issues for the first time would probably see it very differently. My interview with Kunstler eight years ago baffled some readers, who felt indignant at even the notion of returning to a more baseline society. The few people who responded favourably tended to treat Kunstler as an apocalypse nut, associating him with 2012-style New Age prophecies.

Kunstler was and remains a prophet, but not in the modern sense of a guru with mystical visions. Old Testament prophets were the doomers of their day, warning of disaster if – there was always a conditional – the people did not mend their ways. They were not popular with the king’s yes-men, the mainstream media of the time; Ahab said of Micaiah, for example, that “I hate him, for he never prophesies anything favourable about me, but only disaster.”  Someone had to have listened, though, for Jeremiah’s words have spread through the world, and Ahab’s yes-men have been forgotten.
Posted by Brian Kaller at 18:51 5 comments: