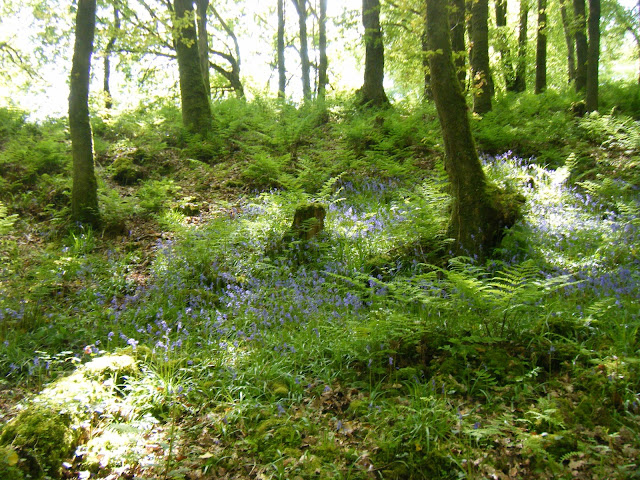 Gardening involves taking plants’ natural bounty – roots and tubers, leaves and stems, fruits and nuts – and stretching them to meet our ends. We start them early indoors as seedlings, prepare beds of earth, place cloches over them to keep out frost, weed out their neighbours, pick their pests and prune their misguided growth. We pamper our kohlrabi and celeriac like breeders groom their horses -- and they need it, for generations of breeding have made them more bountiful and more fragile than the bitter lovage and wild sea kale from whence they came.

Foraging wild foods, however, keeps you on a tight schedule. Those mushrooms that appeared today will likely be slimy tomorrow, and those edible leaves will likely be inedible next week. We picture Stone Age people living by a leisurely rhythm of the seasons, but in fact they needed to manage their time precisely according to their own calendar.

If September through November give us most of the garden’s bounty, these months of April and May are the truly rich foraging months here, when The Girl and I rummage through the bog-country and return with bushels of foodstuffs, ready to be dried, pickled, frozen and made into wine for the coming year.

The beginning of April here sees the first hawthorn shoots, tender enough to be eaten raw for two weeks, or sautéed and added to dishes, or chopped and thrown into soups. Around the same time as the hawthorn shoots appear, the blackthorns burst into flower – they bloom first and beat the rush, only later growing their leaves. In that blackthorn window, however, we can mark their position along the canals – most times of year they are unobtrusive and hard to spot amid the other trees, so you must know where they are first to search for the prized black sloe fruits.

The blackthorn flowers are long gone now, and the hawthorn leaves are getting tough, which means the hawthorns are ready for their turn to bloom. For this reason the hawthorn is also called the May plant; the lyric “here we go gathering nuts in May,” refers to the tree, not the month, as nothing grows nuts in May.

A week or so after the hawthorn shoots appear, the first nettles grow large enough to pick, and the last six weeks have been prime nettle season for us. I’ve written before how nutritious nettles are, and how they can be eaten as a vegetable in their own right, like spinach, or made into tea, beer, soup, kim chi, or put into any number of dishes. I’ve been freezing bags of them to eat this winter, and drying them into tubs of tea to consume through the rest of the year. They are also useful for fibre – I saw an entire wedding dress made of nettle fibre once – but that doesn’t come until later in the year, and fibre is not my specialty.

I pencil in the first two weeks of May in my calendar long ago, for that to us is cowslip season. These yellow flowers, hanging like tiny golden bells from short stalks, illuminate the forest floor here like fireflies for precious short time, taking advantage of the spring window when the weather is warm and the forest floor is covered in dappled sunlight. They are already fading now, as the trees regrow their canopy and the forest grows dim.

We’ve been picking as many cowslips as possible in great bags, freezing as many as possible until we had enough, and last weekend I began cowslip wine. I boiled several litres of water – enough for a carboy and several wine bottles down the road – and mixed in sugar and the juice and zest of two lemons, and finally mixed in the cowslips. I let them boil for five minutes, turned off the heat and mixed in a champagne yeast my friends gave me as a gift – cowslip wine has a definite champagne feel, so the result should be quite good. My last batch of cowslip wine, from last year, and it didn’t turn out as fragrant as the flower deserves, so I’m hoping this will be an improvement.

Also fleeting are the daisies that peek out of the grass; the sweet woodruff that can be dried and used to flavour wine; the bramble shoots we use for evening tea; and the wood sorrel massing like disciples around the feet of the great trees.

The best part of May, though, are the nightly linden salads. The tree right outside my window is a lime or linden tree, and when the leaves first appear at the beginning of May they taste rather like spinach. Every night I’ve been getting home on the bus from Dublin, riding my bicycle from the nearest town, coming home, and picking myself a salad from our tree.

Now that May is leaving us behind, we are seeing the first inchoate elderflowers, green and folded in a fist, but ready to unfurl to a June of elderflower champagne and pancakes. The first meadowsweet stalks are unfolding along the canal, preparing to grow their August tufts, which we will collect for next year’s wine. Fish in the canal will peak as the days stretch to eighteen hours, then fade back again as the days shorten. The garden will erupt with bounty, and we will gather and preserve everything we can before the year plunges into darkness again.
Posted by Brian Kaller at 22:49 2 comments: 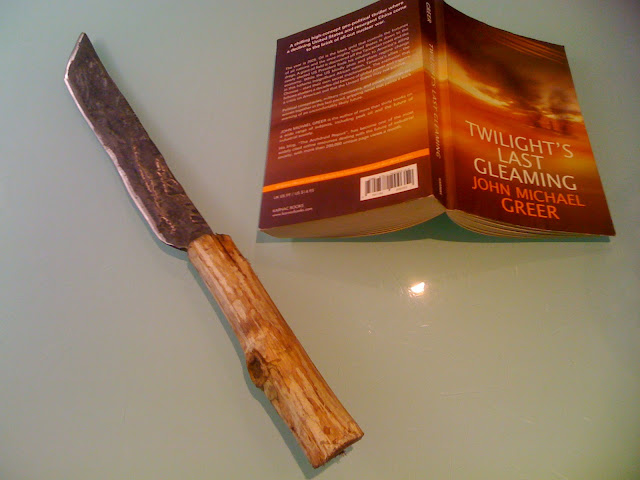 The Girl and I spent last weekend taking courses in traditional crafts, she making a pizza oven out of cob -- a mixture of clay, straw and sand -- with a group of other children.

For my part, I and the others in my class took similar materials -- with some horse manure involved -- to sculpt a forge that could be used to melt and shape metal. Then -- using larger and faster forges to save time -- I melted down a spring from an old piece of machinery and in turns heated it orange and hammered it into shape, until at the end of two days I had a proper machete. The handle was a piece of hazel I cut, and I fit the handle by heating it and pressing it into the handle, as the wood steamed, shrieked and occasionally burst into flame. At the end of it, though, I have a knife I can use to work the hedgerow.

I'll write more about the details later, but for now I wanted to praise the great organisation CELT, which has organised the event, the Slieve Aughty Center that hosted it -- and my tutor, the historical blacksmith Tony Vincent. Well done, everyone.

Photo: My knife, with the book I'm reading for scale.
Posted by Brian Kaller at 22:54 1 comment:

Interviewed on the C-Realm podcast 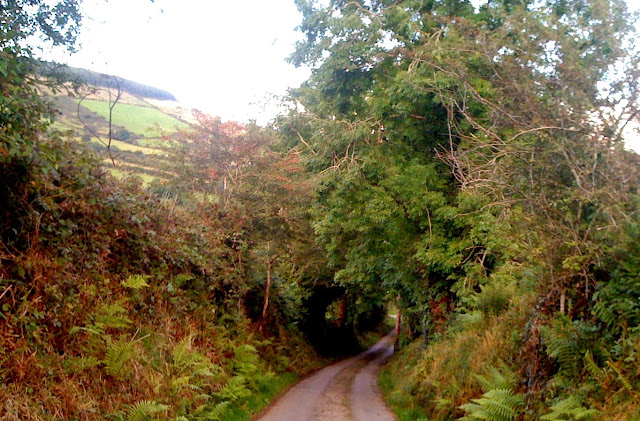 For seven years the C-Realm Podcast has taken fringe and fascinating ideas from all over the political, religious and ideological map. On any given week the topic might be organic farming, science-fiction futures, drugs, or any number of other things, always with some new point of view I don't hear in the mainstream. Most weeks its interviews are only of passing interest to me, but when it hits a subject that fascinates me - perhaps one time out of five -- the result is one of my favourite things to listen to.

For the second time in six months, I'm honoured to be a guest myself, talking about my piece on peak oil.
Posted by Brian Kaller at 21:11 No comments: