Published at the Daily Prepper

Sorry our return to blogging has been slow -- I'm working on it. In the meantime, the Daily Prepper has run one of my articles, on the stone walls of Ireland. Check it out.
Posted by Brian Kaller at 23:22 No comments:

Putting yards to use 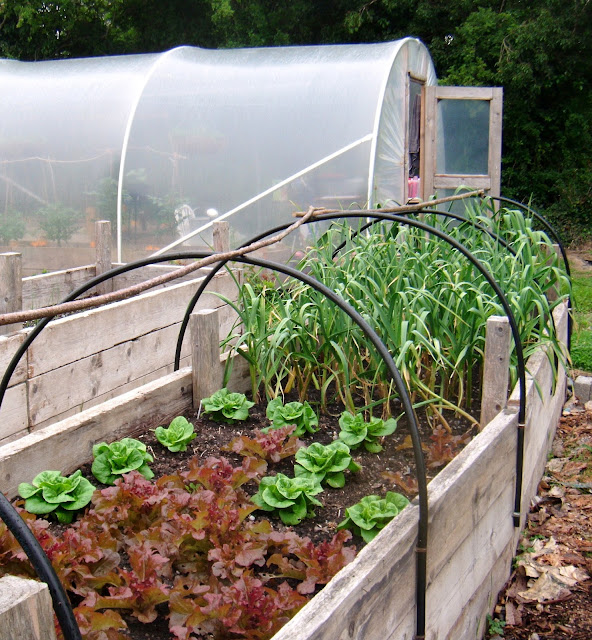 Technical problems continue to make posting light for the moment. Hopefully that will change soon. Meanwhile, this article will appear in the Kildare Nationalist this week.

Take a few facts from recent news reports and try to put them together:

1.) There are about two million homes in Ireland, according to the Central Statistics Office -- most, presumably, with front and back gardens, some near expanses of unused fields. Of these, 289,451 – 14.5 per cent of all homes here – lie vacant.

2.) Four hundred and twenty-seven thousand people are unemployed in Ireland, also about 14 per cent of the country. Five-and-a-half thousand Irish people are homeless, according to the Department for the Environment. Most, presumably, have little to do.

3.) Most of the food eaten in Ireland must be imported from outside the country, according to the Sustainability Institute.

These are no excuses for these facts to co-exist. It’s understandable if not all homeless can be put into currently vacant houses – homeless people can have many issues. But those houses have open space around them, room for gardens that could grow enough food for everyone in the area.

Ireland’s prodigious rainfall and long growing season create a paradise for agriculture, and we know that we can grow and make most of their own food and belongings, because for hundreds of years we did. Meanwhile, we spend money importing food from across oceans, food bred and grown to survive the journey rather than for taste or nutrition.

Instead of gardens, all those homes have grass around them, which someone – presumably the owners of the estate – must pay to mow. Meanwhile, animals that could eat that grass stay in the surrounding fields, while their owners must pay for hay to keep them over winter. Some homeowners use chemicals on their lawn to fertilise the soil; meanwhile, they must find a way to get rid of their animal waste.

Other articles recently talked about the problem of elderly people living alone, with no one to talk to. These are people who grew up with the traditional self-sufficient crafts that got their families through hard times, yet now that times are getting harder again, younger people lack the knowledge to cope with hardship.

In other words, we have inherited several problems that fit together like pieces of a jigsaw to create a solution, and, year after year, choose to deal with them as separate problems. There are many ways of sharing land, but they all involve bringing together people who have time – say, unemployed, under-employed, homeless, children and pensioners – together with land that can provide food for the community with an investment of time and effort.

In a fairly ambitious form of the plan, local organisations like city and county governments, sports clubs, churches and charities could decide to devote it to growing food for the hungry, and hires homeless or unemployed men to work the property. Alternately, they could loan the land out as allotments, to allow such people to grow their own food. The young men would learn vital skills, gain experience and avoid the trouble that comes from adolescents with too much time.

In the UK the Landshare Project has brought more than 72,000 such people together, in a country where tens of thousands of people have applied for community garden space and are waiting in queue. In one area of Manchester, where unused land has been turned into a community allotment, police reported a more than 50-percent decrease in anti-social behaviour, according to UK news sites – they believed it gave young people something to do.

A project like this does not have to be limited to estate gardens. Our area has many green fields that seem little-used, and could be put to work. It doesn’t have to be for growing allotments, either – local residents could use an overgrown vacant lot to graze goats, or plant young fruit and nut trees across green fields. To see if this kind of project would work where you are, walk around your area and ask these questions: how much of the land is unused? Are there unemployed or elderly people around with nothing useful to do? Are there people who don’t like spending money, or who like eating food?

See if you can find them. Take up the challenge. 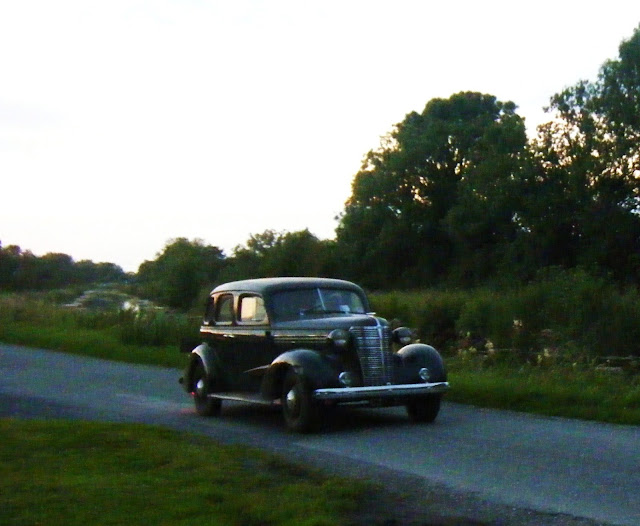 "Most people had a pony or donkey, but young people walked. The only motor car in the area was owned by the solicitor, and he drove it to see people who were making out their will, and once people heard the motor-car, they started talking about the person as though he were dead already.

There were two motorbikes in our area, one owned by the priest, and the other owned by the doctor -- and when they passed late at night, we knew by the sound of the bike which one it was passing. As soon as they heard it in the distance, people were in a panic as to who was badly off."

-- Recollections of Aine Aherne, of Nohoba Kinsale, County Cork, of growing up there in the 1920s. Photo of my neighbour driving his pride.
Posted by Brian Kaller at 22:41 No comments: 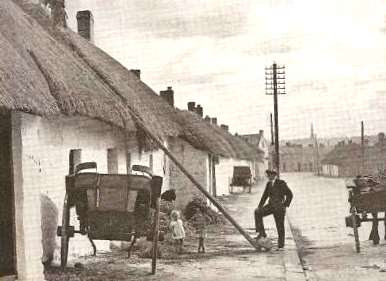 "When houses haven't been rethatched in a while, the walls started to show green streaks from algae off the thatch, and all the neighbours knew they were 'selling laces' -- having money problems."

RTE radio documentary on village life, "Up the Church," broadcast 1972.
Photo courtesy of Irishhistorylinks.com.
Posted by Brian Kaller at 22:58 No comments:

The future of buses 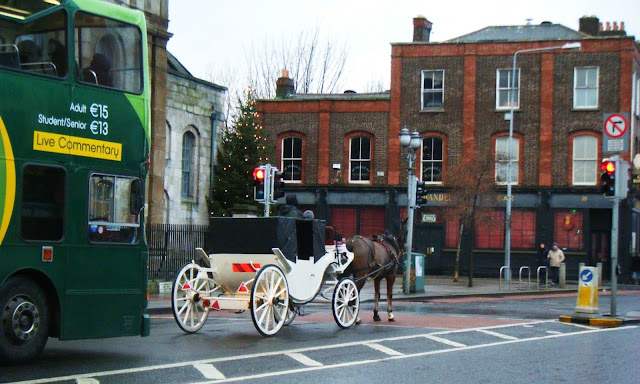 Traffic to and from Dublin was particularly difficult last week when the bus drivers went on strike, and while they seem to be running again, their action reminded us how dependent thousands of us in Ireland are on public transportation – Dublin buses, Bus Eireann, trains, Luas and regional bus services.

Only twenty or thirty years ago, public transportation was basically the only transportation for many Irish, as so few people could afford cars – and now that the nation's economy crashed and had to be bailed out a couple of years ago, it has become many people’s only form of transportation again. Yet if governments become increasingly cash-strapped, they will be less able to buy new buses or replacement parts, much less restore some of Ireland’s once-extensive rail lines. More and more people will need to use the bus, yet the bus might be less frequent and more expensive.

There is another solution, however: during the Celtic Tiger a few wealthy Irish bought SUVs, vans or Hummers for some reason, apparently to seem more like Americans. Such suburban assault vehicles are dubious in the USA, but at least there most people are assured of being able to get them on the road; on Irish roads, which are the approximate width of American supermarket aisles, they look ridiculous. A few of them can function on the Irish landscape, for the few other large vehicles can swerve out of the way delicately, as they do with buses -- but roads filled with them on both sides would be disastrous.

Moreover, they receive only half the mileage of 1920 Model Ts, and are not generally used for fording rapids or scaling Alaskan mountains, as in telly adverts, but rather for inching in and out of parking spaces. These vehicles typically have enough room for at least six people, plus enough cargo space, as writer Dave Barry put it, “to pick up something else, such as a herd of bison.” Between the spike in fuel prices a few years ago and the recession today, many SUV owners are trying to rid themselves of these white elephants; look in any Buy-and-Sell section of any newspaper and you will see such vehicles for sale, at plummeting prices.

These two problems could solve each other. the infamous mileage of SUVs and Hummers only results from the empty space in the back; fill it up with passengers and it becomes a very green choice. Local officials could buy them cheaply, or rent them to use to ferry passengers in lieu of bus lines.

Passengers might be the most under-appreciated factor in how much fuel and money you waste. As I write this, for example, a business headline boasts of Toyota’s multi-million-dollar plan to boost fuel efficiency by 25 percent – but any of us can boost the efficiency of our cars by several hundred percent instantly, with no additional expense or technology, simply by getting more people in the car.

If neither the city government nor the populace has money, enterprising officials could make more creative arrangements – say, giving the SUV owner use of a foreclosed property in exchange for the use of the vehicle, rather than forcing the homeless owner to sleep in it. They could agree to co-sign a residents’ mortgage in exchange for permission to use the vehicle.

SUVs have several advantages over regular buses; for one thing, they would be more comfortable. Their ability to handle rough terrain might turn out a blessing after all, as they can continue to drive over roads in disrepair -- as our roads might increasingly be. More importantly, since they only take eight or nine passengers at a time, they can be economical in small towns and in the country, driving routes that cannot afford 80-seat buses. Bus routes could actually be expanded in places, allowing otherwise marooned residents easy access to jobs, hospitals and food markets.

They can also vary their routes slightly to pick up passengers at home or a short walk away if needed, responding to phone calls for assistance. If a country-dweller needs to get to town and has the SUV driver’s mobile number, for example, they could ask the driver to vary their route slightly rather than walking miles to the nearest pickup point, without unduly inconveniencing other waiting passengers – an important detail for elderly and the handicapped.

Cash-strapped cities could also require drivers to supply their own SUV and fuel, compensating them by letting them keep riders’ fares, and freeing the local government from financial burden. If this sounds suspiciously like a taxi, it is – just a taxi that runs regular routes. Put another way, it could combine the security of bus lines with the flexibility of taxis and the social advantages of carpooling.

The modern system of everyone having their own personal high-speed vehicle will turn out to be a brief and bizarre moment in history, but people will still need to travel. Too many local people, though, think only of their own situation – not realising that thousands of others are in the same boat and that, together, they could do something about it.

Photo: A double-decker bus and horse carriage in downtown Dublin.  Parts of this article were published previously in 2009. Originally published in the Kildare Nationalist newspaper.
Posted by Brian Kaller at 15:02 No comments:

Dublin was once covered with a network of tram lines, so that no one ever had to walk far. Some of the tram cars --- streetcars or trolleys to Americans -- even had two floors, as Irish buses do today. They took holidaying families to the lovely cliffs of the Howth peninsula by the sea, they stretched south to Terenure, and they reached west to the nearby village of Lucan. All with a fraction of the energy we would use to travel the same distances today.

Streetcars seem slow to modern eyes only because we compare them to a car on the motorway; compare them to a car in the city and they may have been faster. One of the Dublin lines ran out to the suburb of Lucan a hundred years ago, and passed through town at 25 miles an hour -- a goodly speed in Lucan's modern traffic jams.
Posted by Brian Kaller at 22:29 No comments: