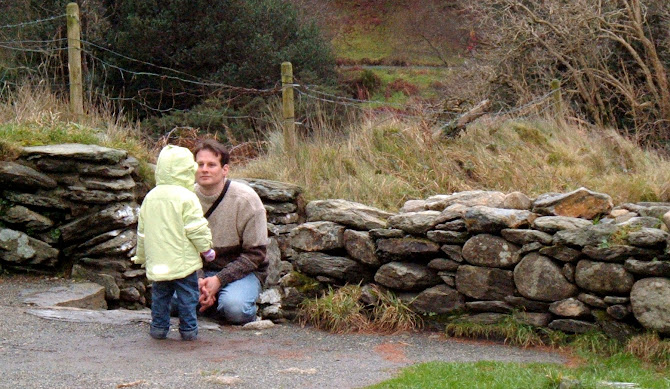 I was going to sleep in Sunday morning, but this metre-high blond person jumped up and down on me shouting, "Look what St. Necklace brought us!" I liked the "us" - she was as happy for me as for herself.

My daughter got chocolate coins and a few other goodies. In my family -- and this part seems to be unique to us – St. Nicholas leaves tins of sardines and octopus in our shoes every December 6. The Girl still refers to St. Nicholas as "St. Necklace" -- she got a necklace on this day a year or two ago, and the name stuck.

For those who aren't familiar, St. Nicholas is a central European custom -- on December 6, he steals one of your shoes and leaves treats in it. Only in recent years did his Dutch version Sinter (Nic)Klaus gravitate toward Christmas. The modern American version seems to have come from the Dutch that once ruled New York, and maintained a presence even into the 19th century -- read "Rip Van Winkle" for more of a background.

It seems that the flying reindeer, the fur coat, the chimney and many other details came from the 19th-century poem "A Visit from St. Nicholas." Even then the character could come in different forms -- green, thin, whatever. A 1930s Coca-Cola advertising campaign fleshed out the rest, and now we think of Santa as older than time.

Many people would be surprised to find how new most Christmas carols are: "Rudolph the Red-Nosed Reindeer" was invented as a marketing gimmick for Montgomery Ward stores in 1939, "Chestnuts Roasting on an Open Fire" in 1944, "The Little Drummer Boy" in 1957, "Do You Hear What I Hear?" in 1962. Christmas trees are also fairly new, dating only from Victorian Britain. Only a few generations ago, "Christmas" customs would have been almost unrecognizable to us -- how many of us have gone wassailing, or singing around the beehives on Christmas Eve?

Many of the other holidays are similarly recent inventions. Many of my countrymen think of Thanksgiving as an unbroken tradition dating back to the Pilgrims and Indians, as in the annual school plays with their construction-paper costumes. The holiday, however, seems to have evolved out of harvest festivals of many immigrant groups from Europe, so it is both newer and older than the Pilgrims – only in the 1800s did we look back on that settlement, and their famous dinner with the Natives, and retroactively call it the holiday’s origin story.

I bring this up not to belittle the holiday traditions I love, or to claim that some are “authentic” and others not. I do think, though, that we feel enormous pressure to follow the usual rituals every December -- buy too much, eat too much, drink too much, sing the latest Christmas pop hit and watch the usual television programs. It’s okay if you don’t enjoy the 47,000th replaying of a George Michael song, to not have to watch certain commercials on a certain day, and to not have to create a blaze of electricity around my house that can be seen from space.

I’m not here for the holiday; it’s here for me, and for my daughter. This is our time for comfort and joy, and pop songs and television specials are not holy. These moments, with her climbing into bed with me, are holy, and when I pray, they are the engine of my gratitude.

Posted by Brian Kaller at 20:03 No comments: