Now that the snow has melted, we are seeing our land for almost the first time since moving in, and is it ever a mess. In front of and behind the house the former trees or gardens are now fields of muck peppered with builders’ rubble, and we have to turn it back into a garden.

The cardboard from moving boxes, spread across the land, will keep out weeds, and the chest of drawers can be made into a coldframe. The evergreens have spread far beyond their bounds, and need some severe pruning.

The pruned boughs have made a trail over the mud, and more of them might make good bedding for underneath the soil – forming a barrier at the base of the garden bed, drainage for our frequent rain and gradually composting away. They are acidic, though, so they might not make a good bed for things like brassicas.

We have mixed feelings about the evergreens – they are an invasive species that must be hacked back frequently, but they are also a good windbreak in this flat and whistling bog-land. One idea was to cut back the branches and weave them into a fence, and plant seedlings of something more desirable on the fence’s sunny side. In theory, the branches would collapse and the trees die over a few years, by which time the native trees would be strong enough to thrive. 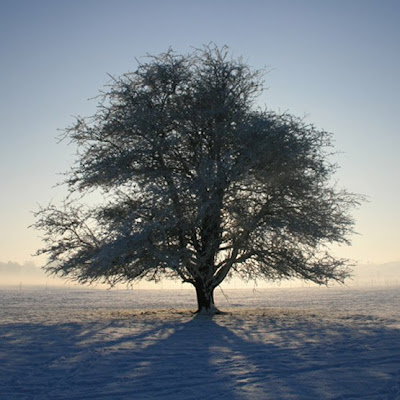 Photo by Hermann Geissel of FADA.
Posted by Brian Kaller at 01:46 No comments: 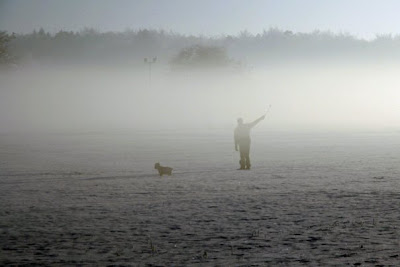 Over the last week I chatted with farmers next door, villagers down the road and commuters at the bus stop, and everyone said the same thing: “Does anyone believe in global warming now?”

Once you get your laughter under control, though, you might realise the joke is based on a mistake: that climate change will make everything slightly warmer. What we should expect instead is stranger weather – depending on where you live in the world, you might see the coldest, hottest, rainiest or driest weather ever. You might see all these things in a matter of months – just as in the last few months, Ireland saw unprecedented floods followed by bizarre snowstorms. This is, in fact, what climate change should look like.

We can never prove, of course, that those or any events are directly due to climate change, any more than we can say whether the economic downturn was the reason for an individual’s bankruptcy. Such an answer would involve comparing the individual’s fortunes with what they would have been if the economy had not plunged, and we will never know that. All we can say is that when the economy plunges, there are more bankrupcies -- but of course, there would have been a few anyway, and even in a depression a few people will be unaffected. So will it be with the climate in the years to come.


This photo is by FADA member Hermann Geissel, who took some amazing pictures of the snowbound Irish countryside.
Posted by Brian Kaller at 10:25 5 comments: 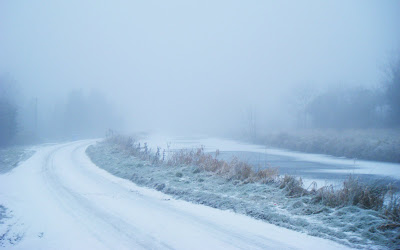 The view from our front gate yesterday. Compare with this photo taken from the same spot a couple of months ago.
Posted by Brian Kaller at 10:54 No comments: 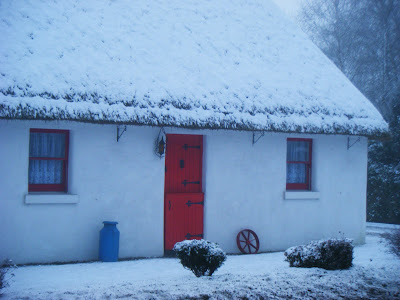 We are settling into our new home, but we chose to move in at an interesting time, and not just because it was Christmas. Ireland is experiencing something of a national emergency – temperatures have dropped to some of the lowest on record, and it has snowed, sleeted and hailed for weeks now. The roads are iced over, and the cities run out of their salt supply tonight.

At the same time, we moved into our new home, where the underfloor heating was not at first set properly, the hot water was not very warm and the gas kept freezing. We have a fireplace and many piles of wood, but not all are of suitable size, and while we have a hatchet, it is not very sharp. So we stayed well stocked with turf – the main fuel here – and kept well huddled around the fire.

Even worse, I also had to work at my day job the final week of December, when I was one of the only people in the unheated building. This week the buses have been so delayed by the ice and snow that my usual three hours a day on the bus has stretched into more like six hours, and I am spending almost as much time on the bus to and from work as I am at work.

Luckily, our home heating situation has much improved – we boosted the underfloor heating, so it is now more like 13 degrees inside (55 F) rather than five degrees (40 F). I’m all for living on less, but I want to get there in stages.

We are, however, learning that many of the household practices of 19th-century England or America were time-tested to help people live in such temperatures. Tea cosies were not just a quaint affectation of Jane Austen’s time --- they keep your liquids hot in a cold house, and hot liquids keep the body warm. I associate bed-robes with Ebeneezer Scrooge or Sherlock Holmes, and long undergarments with cowboys in old Westerns -- but they conserve the body’s heat. Hot water bottles in bed, poking the fire – all eminently functional details, now dimly remembered from old novels and films made in the foothills of history’s energy needle.

On the evening news in our new home, we watch Irish newscasters and political leaders speak in increasingly strident tones about the urgency of this crisis. Towns have not enough salt reserves and few ploughs, and businesses are not likely to allow for working from home. People do not always know to drive more slowly, keep more distance between their car and the next, or to allow for more time in their schedules for commuting. Thus, the country is slowed to a crawl by weather that would not be unusual by the standards of Minnesota, or even Missouri.

It is not that the Irish are not hardy. When I am coming to work in a coat and scarf, many Irish around me are wearing much less, and a co-worker of mine is perennially wearing a T-shirt. As I mentioned, many people here keep their homes at temperatures Americans would find frigid, or work in long stretches of rain I find oppressive. But they are no more prepared for a Midwestern summer or winter than they are for snakes.

As we face stranger weather, more expensive energy and less money in the future, we would do well to remember this --- that hardship is what we are not accustomed to. Adapting is difficult, especially when it is unexpected – but we can adapt to much more than we imagined.

Photo: a thatched house near us, taken today.
Posted by Brian Kaller at 00:00 2 comments: 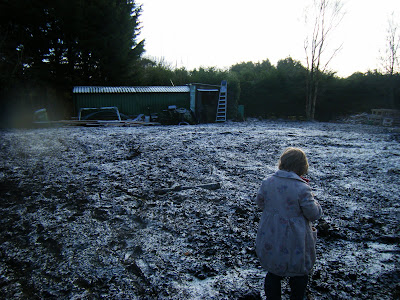 The Girl’s wobbly tooth had been threatening to make a bid for freedom since before Christmas, and we joked that Father Christmas and the Tooth Fairy would bump into each other in the dark. But it waited until last night, and she placed it in aside while she diligently picked up her toys downstairs, cleaned her room upstairs, brushed her teeth and got into her jammies. At length, though, she could no longer resist proudly dancing around with her tooth – accidentally flinging it somewhere in her room.

We searched every inch of her room, it seemed, but no tooth – a catastrophe as far as she was concerned, for it meant no Tooth Fairy and no coins under the pillow.

Finally, while she was searching under her bed, I ran downstairs and took down from a high shelf a tin of sentimental things – including her first lost tooth. I slipped it between my fingers, went up to her room and slipped it onto the floor.