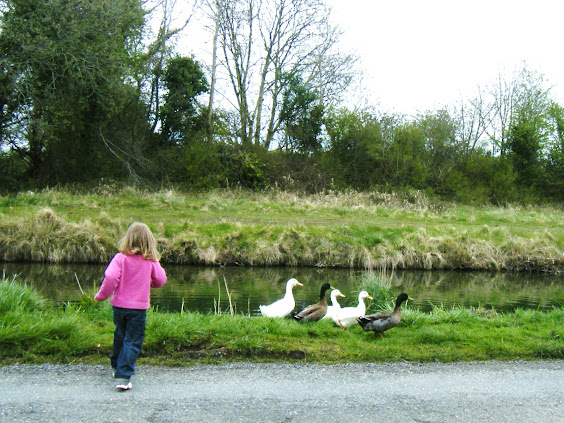 I have a long ride home from Dublin on the bus every night, and the Girl is always happy to see me. Tonight she was feeling restless and contrary, however, even though she had been well-behaved all day.

“Sweetie, I need you to be good just a little bit longer,” I said.

“But I ran out of good,” she said seriously. “All the good ran out of me, and all the badness ran in.”

Photo: The Girl running after our ducks.

Posted by Brian Kaller at 21:28 No comments: When The Girl was a baby, I taught her a bit of sign language, to tell us what she needed before she could speak. I wondered if we could keep learning and teaching her when we moved to Ireland -- and then discovered that, while children's programmes here do teach sign, British Sign Language is entirely different. There is also an Irish sign language that has nothing to do with either. And an unrelated Northern Irish Sign Language.

Contrary to popular belief, I learned, sign language was not developed by educators, nor is it simply gestures. It is a global panoply of languages, each a hybrid that linguists call a creole. Every one, linguists believe, is the result of deaf children in an area -- each of whom had invented their own crude gestures in isolation -- meeting and gradually blending their signs into a patois. As the signs spread to other deaf children, they fleshed out the signs into a fully-formed language, capable of communicating everything that a tongue can.

This is just what happens in spoken language, when different groups meet and have to work together. The initial result is a stripped-down version of language -- small nouns and verbs made into simple sentences, sounding like Tonto or Tarzan -- but the younger generation expands on these fragments and reassembles them into a new form. You could argue that English itself is a creole, a still-awkward synthesis of Scandanavian-sounding Old English with Latin-derived Norman French.

In the case of sign languages, every language is a creole, for almost every new deaf school or network of schools resulted in a new language, not necessarily with the same boundaries as spoken languages or nations, and as unrelated as English is from Chinese. I am even told that, if a Chinese Sign Language speaker learns British Sign in adulthood, he will forever sign with a Chinese accent.

So -- back to the point -- The Girl had to learn everything over again. She does know a little sign, though, and they show up in play.

Tonight before bed she wanted to pretend to be a Compsognathus – what she calls a “chicken dinosaur,” because they were the size of chickens – and I would pretend to be a giant Brachiosaurus stomping about. I obliged.

She explained that she was trying to talk to some children who were coming out of “the fairy house,” but the children screamed and ran back inside, because they thought she, the Chicken Dinosaur, would eat them.

“Did you tell them you were a friend?” I said. “Speaking Child and not Dinosaur?”

“Well, they were deaf,” The Girl said. “And I can’t sign very well, because instead of hands I have these claws with pointy bits at the end, so when I raise them to speak sign language the children think I am going to claw at them.”

That would be an occupational hazard, I said.

Posted by Brian Kaller at 22:51 No comments: