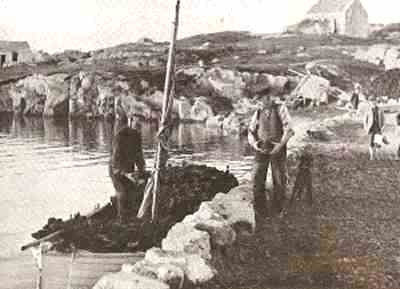 My daughter and I spent Sunday footing turf in the bog near our home – a phrase that made no sense when we first moved out here, now an important day in our calendar.

Turf, also called peat, is the remains of centuries of moss and other vegetation that built up in the bogs, which built up over the millennia when the submerged lower strata did not fully decompose. Draining the bog and pulling back the top layer of vegetation reveals black and spongy bio-mass that turns reddish-brown and hard when it dries, and creates a slow-burning, smoky fire when lit.

For hundreds – probably thousands – of years it has been the main way people in this cold country kept warm. The smell of burning turf is one of the most distinctive things about this land, and in country homes and pubs alike here neighbours gather around turf fires in the winter evenings.

Today a walk through bog less than a kilometre from our house reveals fields of flowers, never-cut or grown-over, as well as ditches used to drain away the groundwater, and finally a maroon peat landscape, with the underfoot consistency of a firm mattress.

It has become a decidedly uneven landscape by now, with hollows a few metres deep in the red land, quarried where generations have scooped out the turf, interrupting it on its way to becoming coal. The canals in front of our house were built in the 1700s to go through this area, with railway tracks running from the canal banks deep into the bog-lands. Spanning the canal sits a rusted trestle and crane, about three metres tall, and perpendicular to the canal, heading off into the bog, are rail lines now buried under grass. 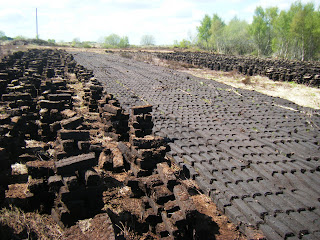 Burning turf makes a strange conundrum for fans of independent, sustainable living. On one hand it is the only fuel, apart from wood, that you can gather yourself near your home, using ordinary tools. Peat bogs around the world present an opportunity for people to keep warm in winter without being dependent on the grid, unless governments clamp down on the activity or the bogs are tapped out.

On the other hand, “while peat is classified by the IPCC as a renewable fuel,” wrote Kris De Decker in Low-Tech Magazine, this is highly debatable. Peat is renewed at a rate of about one millimetre per year at most, and so it takes about 3,000 years for a peat layer of three metres to return to its original size – and only if the land is not disturbed in that time. In addition, mining the peat has a very large impact on the landscape, as we shall see, while the burning of turf produces slightly more CO2 emissions than coal for the same energy content. The only advantage it has over coal is that it produces less smoke and has a lower sulphur content, and thus produces less air pollution than coal.”

Right now the Irish government is forbidding hand-harvesting of turf, one bog at a time, ostensibly to protect it as a wetland -- which sounds good, except that the national energy company already mines the boglands on an industrial scale to produce most of the country's electricity. In the meantime, my daughter and I dried enough to last us for the next few years, by which time this old tradition might be only a memory, or performed in secret. 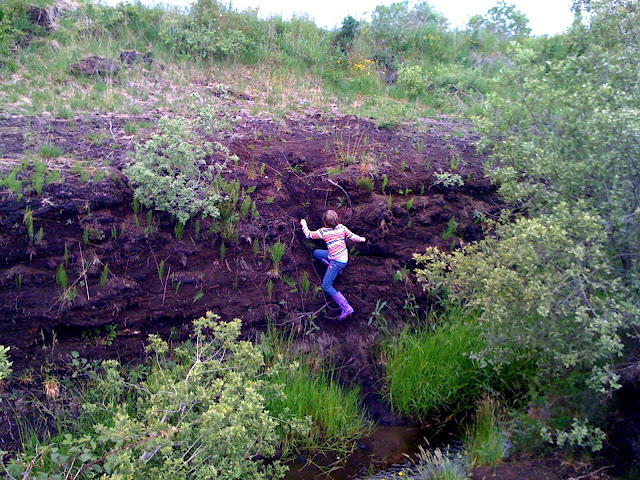 Top photo: Loading turf into a boat for transport, circa 1900.
Middle photo: Cut turf and stacks of footed turf.
Bottom photo: My daugher climbing one of the quarries in the bog.
Posted by Brian Kaller at 23:50 3 comments:

Fallen tree in the woods 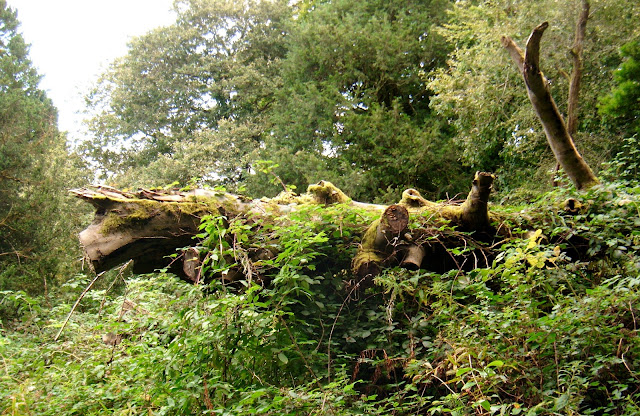 The Train to the World 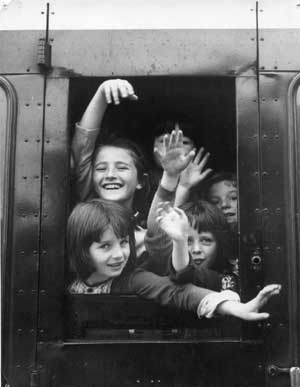 "People, they don't realise what they lost," said Dan, an old man who remembered the Bundoran Express, the train that carried families to the sea and pligrims to Lough Derg. "People were so happy then."

"The other thing about a railway station like Eniskillen -- it was the last place people would say goodbye before leaving the country," Johnson said. "It was the place they made before going on honeymoon, or to war, to make a life elsewhere."

-- From the RTE radio documentary "The Bundoran Express," broadcast 04 August 2010.
Posted by Brian Kaller at 23:15 No comments: 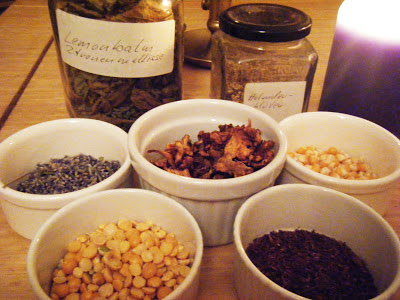 Wherever they lived in the world, people faced the same dilemma: they need food every day of the year, but most foods are only available for a brief season.

Around us, for example, hawthorns bear shoots for a few weeks in spring, sorrel emerges in the summer, and berries appear for a few weeks in autumn – but none of those provides a great deal of nutrition, and a diet of just a few species of plants in any week would grow quite monotonous. Then, of course, there are long months of winter where little grows, and if you get a year like we had in 2012, you get the equivalent of eighteen months of winter. And Ireland, of course, has one of the most temperate of climates; most regions of the world dry up, freeze, bake, swelter or flood for long stretches of the year.

If you are like many animals, the lean times are simply when you live or die, and your numbers reduce. Humans, on the other hand, came up with ways to preserve the harvest through the lean months, through generations of trial and error, allowing us to spread to almost every climate in the world.

The specific methods changed with culture and climate, but people knew how to dry, pickle, salt, bury, smoke and ferment, just as people used to know how to raise food, build shelters, birth babies, raise children and bury their dead. It is only in the last couple of generations, here in the West, that we have forgotten all these things, and expect to be taken care of.

Today, a shocking percentage of people -- a majority in America - don't cook at all. Seventy per cent of Americans are overweight, and a recent poll in England found that a third of food was thrown away uneaten. That constant stream of cheap and unhealthy food, though, depends entirely on a flood of fossil fuels, a stable climate, a healthy economy and many other factors that will fade as the years pass. More and more modern people are taking up backyard gardens, allotments and other ways of growing food, but these hobbies will be of only limited value unless they also relearn to stretch most of the harvest into the rest of the year.

Preserving food against decay generally follows a simple principle: make it unpalatable for the things that would decay it, by making it too dry (dehydrating), too cold (freezing), too salty (salt pickling), too sweet (jams and cordials), too acid (vinegar pickling) or sterilised and removed from oxygen (canning).

Drying food is such a commonplace technique that it has become invisible to us; say “dehydrated” and most people think of Army rations, but of course our flour, corn, rice, barley, oats, beans, tea, coffee, herbs and spices all sit dried in our kitchens, and begin to go bad if touched by moisture. Most of us could not dry grains at home, or would need to, but you can certainly dry herbs from your garden; we hang our sage, rosemary and oregano upside-down in the kitchen pantry, along with nettles (for tea) and onions from the garden.

All manner of edible plants, moreover, can be dried for teas – dandelions, mint, clover, bramble shoots, nettle, chamomile, Echinacea, fennel, dill, anise, thyme, linden or St. John’s Wort. Fruit of all kinds can be dried: raisins, sultanas, sun-dried tomatoes (technically a fruit), apple rings, fruit rolls and any number of processed foods. Some of these tend to come from warmer climates and can be shipped here; raisins were a commonplace ingredient in Irish dishes for generations, a precious bit of fruit during the dark months, but native dried fruit could have done as well.

Drying meat into jerky is an old method of storing protein, and other people dehydrate chopped vegetables as soup starters. The Japanese dry seaweed to use in soups, and we here in Ireland pay high prices for it at sushi restaurants, yet ignore the thousands of tonnes of edible seaweed on our own shores.

Your climate will make some kinds of preservation easier or more difficult -- our damp climate in Ireland means we have to watch out for mould when drying, and you may need the help of your radiator or oven. On the other hand, we have very little snow or even frost here, and this is a good climate to simply leave things like parsnips, celeriac or other root vegetables in the ground through the winter, and yank them out as you need them. Some people put straw or bags over them to protect from frost, or pull them from the earth and store them in sand.

Finally, you can preserve some foods by changing them into other foods; we turn our milk into yogurt and soft cheese, and my first hard cheese experiment created some very nice Parmesan. More on how to make cheese soon. 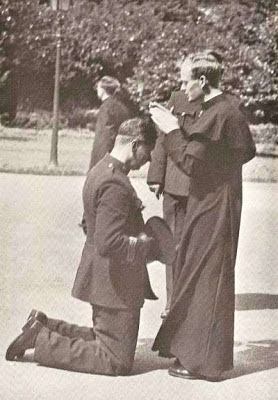 Photo: A priest blessing a garda, or policeman.
Posted by Brian Kaller at 23:56 No comments: