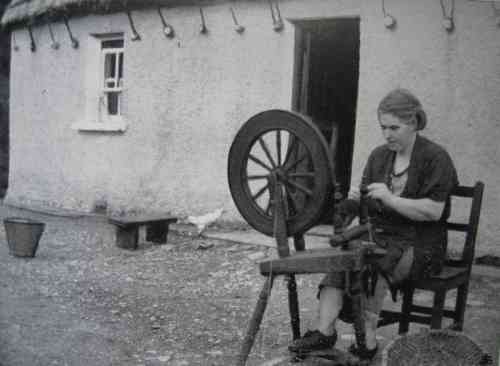 "Sometimes when you are asked a question, it puts your mind back to something you had forgotten about for years. For example, when you asked that I remembered when we used to say the rosary at night"

"There was eight of us, and we’d all say the rosary. And when we were done Daddy would say to us, 'that’s the end of that now –say your own little prayers, like good children.' Well all you’d hear was the tick of the clock, the all-weather clock on the wall. And that was all you’d hear was the quiet, but these days everything is buzz, buzz – noise everywhere, and people in a hurry all the time."

"I remember well my young days, particularly Black ’47. When I was born, the treaty had been signed but not ratified – I always call myself a child of the state, for I was born on Christmas Day 1921, and. I made my First Communion on Trinity Sunday 1928. There’s a lady here who was born in ’28, and I think I’m doing better than she is, I’m holding myself better. "

- interview with Patty Trabears, 2018. Photo taken in Ireland around the time of Patty's birth.

Posted by Brian Kaller at 21:30 No comments: 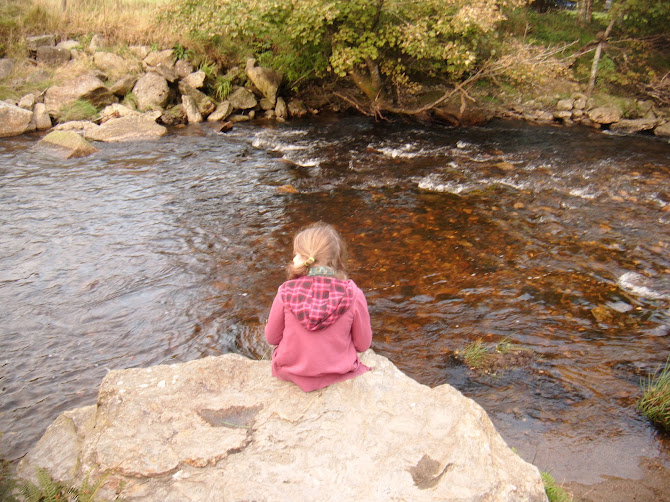 I wrote this 13 years ago. My girl is turning 18, and I think the things I wrote then -- especially the part about a risk of "civil war and public breakdown before she is grown" have held up pretty well.

Tonight as I put my daughter to bed, she looked out her window and whispered, “Papa – look! There is a boy robin in the garden, on the rocks.”

I see him! I said, as our faces gazed out the window together. I think his missus is in the trees back there.

"Why doesn’t she come out?"

She takes care of the eggs, while he looks for food. He’s bright red so predators will see him instead of the missus.

"And there is our neighbour – he is smoking! That is bad for you," she said, pulling out the lung page of her children’s book about the body and showing me.

Yes, you should never do that, I agreed.

"And what are these?" she asked, pointing to the book’s pictures of red and white blood cells.

She asked to play red blood cells for a little while -– I swear I don’t make these things up -- knocking on each cell door and announcing they had an air delivery. Then she wanted to play white blood cell, creeping up on a naughty germ and saying, "I’ve got you now!"

After a while of this she asked, "Papa, what would happen if there weren’t trees?"

That would be very bad, I said. Trees make the air that lets us breathe – they are why the sky is blue. The sky is made by life.

"And they grow fruit," she said.

Yes, and nuts, and many other things to eat. What else can you eat that comes from a tree?

Yes, and you could even eat sap and some bark, I said.

"Wow!" she said in delighted disgust.

It doesn’t taste good, but you could eat it if you were hungry in an emergency, I said. What else can you eat in an emergency? She cheerfully rattled off the list she knows from songs, and we talked and read a bit more before I kissed her good night and came downstairs.

I have often written here about my four-year-old, and the responses have allowed me to meet many kindred spirits far beyond my circle here in County Kildare. The moments with her are what give my life meaning; every day it tears me up inside to leave her with her grandmother, and go to a day job, and no amount of promotion or rewards will change that. A part of me dreams of being able to let go of my job, spending time with her all day, every day, and post daily four-year-old stories for years to come. But she will not wait for me, and today, already, she is five.

Of course a yearly marker does not make her a different person. But time will, and too quickly for me to do anything but run behind it, calling for it to stop. Perhaps it is because I am in my thirties now, and my clock was set long ago – like most middle-aged people, I feel a year go by when two or three have passed. Perhaps it is because the world events that I study have accelerated with harlequin abandon in the last few years; already we have seen so much of the world unravel, and might see civil wars or public breakdown before she is grown.

I only know that each moment flickers by like passing traffic out the window, too swift to observe as it happens, but only to remember dimly after it has gone. Part of me wants to live in a painting – Still Life with Four-Year-Old, a golden moment in amber. A part of me winces to see my toddler grow lanky and coltish, tapping newfound reservoirs of defiance and negotiation, her once-giant eyes occasionally rolling in the first fetal signs of adolescent ennui. I want to throw a hook into the blur and reel in the moments, pore over them, plead with each of them … stay. Please, don’t go. Linger.

But they won’t. She will be six soon enough, and ten, and fifteen, each age attended by its own moments of comfort and joy, its own arguments. I can try to be a good escort into her future and linger over the moments, knowing their blurred passage is all I will ever have. I cannot extend my life’s length, but you, my girl, allow me to extend its depth.

Posted by Brian Kaller at 23:58 No comments:

Interview with Scott Johnson of the Low-Tech Institute

A while back I had the pleasure to do a podcast with Scott Johnson of the Low-Tech Institute of Wisconsin, about the work we were both doing in our respective countries; we chatted about the Irish elders I’ve talked to, and how their close communities and traditional culture allowed them to survive crises like the bank strikes of the 1960s and 70s. He allowed me to put it on Youtube, and here's part 1.

The Low Technology Institute, in Wisconsin, USA, researches ways of adapting to the difficult future we see ahead --- they do a blog, podcast, and videos, and offer regular workshops and memberships, and they’re well worth your time. Read more about the instutute here: https://lowtechinstitute.org.

Posted by Brian Kaller at 21:56 No comments: