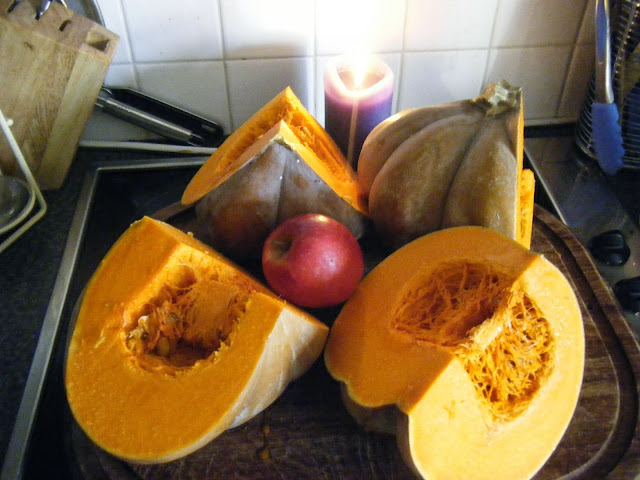 Savoury squash: On the rare occasions that people here cook squash, they usually accentuate its already sweet flesh into a dessert. Personally, I find that to be going too far, and prefer to offset the sweetness with other notes – tart, spicy and especially savoury. This baked dish combines all of these.

Peel the butternut squash, and scoop out the seeds in the middle. Dice the remaining flesh into squares about a centimeter across. Place a pat of butter and a teaspoon of oil in a pan and sautee the remaining squash flesh for 10 minutes. Add the onions and sautee 10 more minutes, and add some garlic a minute before the end.

In a bowl, mix the lemon juice, the vegetable stock, the mustard, the cayenne, the parsley and the eggs. Turn off the stove and transfer the squash-onion mix into a small baking dish, and mix in everything from the bowl. Shred the gruyere cheese and sprinkle it over the top.

Bake it in the oven at 200 degrees Centigrade for 20 minutes, or until done.
Posted by Brian Kaller at 23:14 2 comments:

My article "Wild Food All Around" has been printed at Grit Magazine -- check it out.

Posted by Brian Kaller at 21:55 No comments:

Ground in the Burren 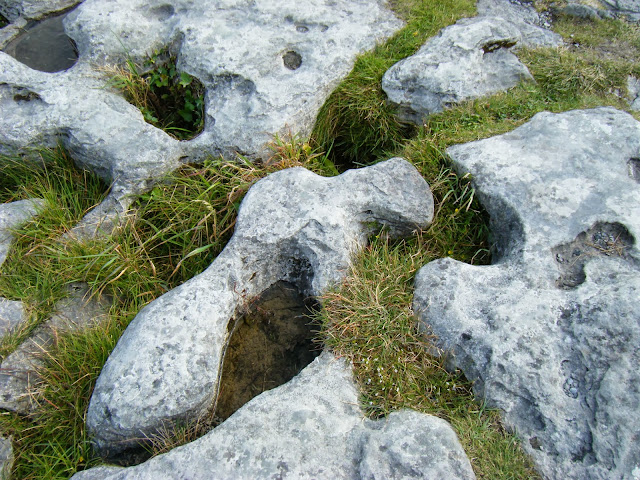 The stark karst ground of the Burren, County Clare. You have to watch where you step.
Posted by Brian Kaller at 21:45 No comments: 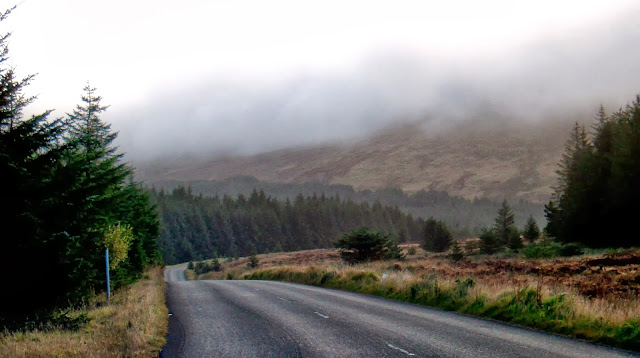 Posted by Brian Kaller at 21:48 No comments:

Nothing Needs to be Wasted 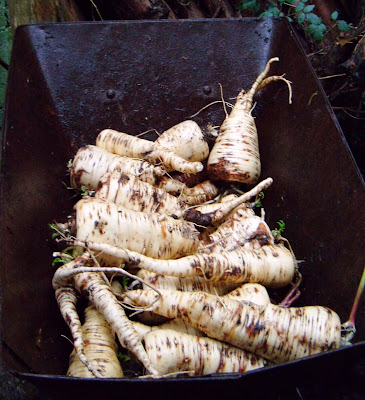 Several years ago a study found that up to a third of all food sold was thrown away uneaten – inexcusable in a country where farmers struggle and children go hungry. That country was the United Kingdom, which has a generally good record of conserving its resources, so pundits wondered what a global study would find. Such a study was released earlier this year – by the Institution for Mechanical Engineers, somewhat surprisingly – and looked at impoverished Third-World nations as well as the prosperous West. Unfortunately, their findings revised the figure … upwards.

The IME report found that “30-50% (or 1.2-2 billion tonnes) of all food produced never reaches a human stomach” across rich and poor countries alike. The reasons varied, however; poorer countries had less money and technology to harvest and store food properly, while countries like ours waste food mostly through “retail and consumer behaviour.”

The retail part accounts for a third of all crops brought to stores, they said, when “supermarkets, in meeting consumer expectations, will often reject entire crops of perfectly edible fruit and vegetables at the farm because they do not meet exacting marketing standards for their physical characteristics, such as size and appearance.” For ten thousand generations humans ate or preserved what was ripe; now we demand food appear before us in all seasons, looking like it came off an assembly line.

Then, once the food is on the store shelves, “commonly used sales promotions frequently encourage customers to purchase excessive quantities which, in the case of perishable foodstuffs, inevitably generate wastage in the home. Overall between 30 percent and 50 percent of what has been bought in developed countries is thrown away by the purchaser.” That’s up to 50 percent in our homes on top of the 30 per cent at the store – up to 80 percent overall.

Such depressing findings studies do have a glass-half-full side, however: we could cure world hunger right now with what we already have. Of course, there’s no one giant pool of food – if we waste less, it won’t mean a village of Africans suddenly receives more. It might mean, though, that lands being used to grow crops for us – bananas, coffee, whatever – could instead be used to feed local people, or some other effect.

Conserving our food waste would also save money in bin charges, and would help reduce some of the greenhouse gases that are making the global weather go haywire. Properly composted kitchen waste gets munched by worms and oxygen-loving bacteria, but when thrown in the regular bin and buried deep in a dump, a different type of bacteria have to work on them – methane-producers. Methane is 23 times more powerful a greenhouse gas than the carbon dioxide from our cars and factories, so while our food waste is only a small part of greenhouse gas emissions, it’s a powerful part, and one easily eliminated.

The first way to cut food waste, obviously, is to use as much as possible, whether store-bought or from your garden. If you have extra fruit or berries, or find they are a bit too ripe, make them into jam to preserve vitamins over the winter. Freeze them to use later as pie filling. Mash and dry them into fruit leathers for snacks over the next few weeks. Pile the fruit and berries into a jar to the rim, pour spirits like vodka or poitin over them, and make liqueur.

If you have too many leftover peas, for example, try juicing them, mixing them with lemon juice and vodka, and making peatinis. Make them into a dipping sauce. Dry them by the closetful for pea soup over the winter.

If you have too many courgettes (zucchini to Americans), incorporate it into bread, cakes, casserole, soups, stir-fry, sandwiches, frittatas, moussaka, tarts and latkes. If you are overloaded with herbs, cut them at the base, hang them upside-down in the closet or greenhouse to dry, and use them over the rest of the year for flavourings or tea. Alternately, mash basil and other herbs with pine nuts and olive oil to make pesto.

Most of all, remember the most powerful weapon in the fight against home food waste: quiche. This fancy-sounding French dish – typically cooked vegetables covered in cheese and eggs and cooked like a pie – works well to disguise any number of old dishes.

Raw vegetable waste unsuited for human consumption – carrot tops, coffee grounds, peelings and woody stalks – need a compost bin. If you don’t already have one, start working on it now or ask permission to use an inconspicuous corner of someone else’s yard. Compost turns your waste back into soil that you can put back in the garden after a year or two, soil rich in the kind of nutrients that might otherwise require chemical fertilisers.

The most basic kind of compost is for raw vegetable waste – things like animal waste or mulch need a separate bin, and need to “cook” for longer. Don’t put meat, cooked food, fat or eggshells in, as they could attract vermin. Don’t put too much that would be poisonous, like potato leaves – farmers around us pile up the potato leaves to dry and then burn the dried pile in spring.

For things that don’t go in regular vegetable compost, there are few kitchen disposal units better than chickens. They eat both meat and vegetables, cooked and uncooked, and they don’t care if the rolls are a day old or the carrot slices have gone woody, and they will readily turn all your waste back into protein again.

With measures like these, most of us could reduce our waste to almost zero in a short time, and while we’re not directly responsible for supermarkets and other companies, we can influence their behaviour. If you have a lot of chickens or a big compost bin and they have fresh food they throw away each night, you can talk to them about alleviating their waste disposal costs.

Such experiments have hazards, of course – you want to make sure you don’t generate disease or a neighbourhood odour – but when done properly they could solve multiple problems with a single solution. And, of course, you can grow your own.

Photos: Parsnips from our garden.
Posted by Brian Kaller at 23:13 3 comments: 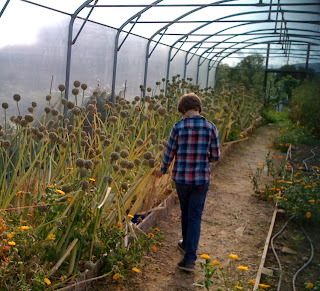 For some reason, “salad” in the modern Anglo world has come to mean iceberg lettuce, one of the few vegetables with almost no taste or nutritional value; it’s no wonder that so many people think of eating fresh vegetables as they would going to the dentist.

Many people, when they look at the root vegetables swelling to an impressive size this month, think of the usual roasted vegetables or soups. If you are looking for another way to cook them, however, or think you dislike a certain vegetable, try it as a salad and see if you can’t make it into something entirely new.

Carrot – beet salad
My brothers and I grew up convinced we hated beetroot, knowing it only as boiled red lumps. When we started growing our own, however, we began experimenting with salad recipes, and found it like a whole new vegetable.

Combine vinegar and oil in a large bowl, whip into a vinaigrette sauce, stir in the herbs, then slowly mix all other ingredients into it. Let stand for an hour. If you want something more Oriental, you can add soy sauce, ginger and sesame oil.

Potato salad
I used to think of potato salad as an oppressively heavy dish, but with salad potatoes, apples, celery and herbs, and with yogurt substituting for most of the mayonnaise, it can be made surprisingly light.

Boil potatoes till tender, peel and slice as hot as you can manage. Slice eggs and celery, and dice apples. Chop any fresh herbs you have plus 3-4 green onions. Mix salad sauce and add to warm potatoes, and toss gently. Leave to cool and adjust seasoning.

Tomato salad
We’ve had a brilliant year for tomatoes, and some of us are just getting the last ones out now. If you have some that never turned green, don’t throw them out – fried green tomatoes are a delicacy in the southern USA.

The following are some of the recipes our family uses; of course, you can experiment and see what suits your taste. 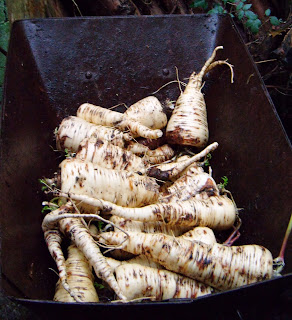 More good news: my piece on global food waste has been published at Grit Magazine:

"Several years ago a study found that up to a third of all food sold was thrown away uneaten – inexcusable in a country where farmers struggle and children go hungry. That country was the United Kingdom, which has a generally good record of conserving its resources, so pundits wondered what a global study would find.
Such a study was released earlier this year – by the Institution for Mechanical Engineers, somewhat surprisingly – and looked at impoverished Third-World nations as well as the prosperous West. Unfortunately, their findings revised the figure … upwards."
Posted by Brian Kaller at 23:13 1 comment: 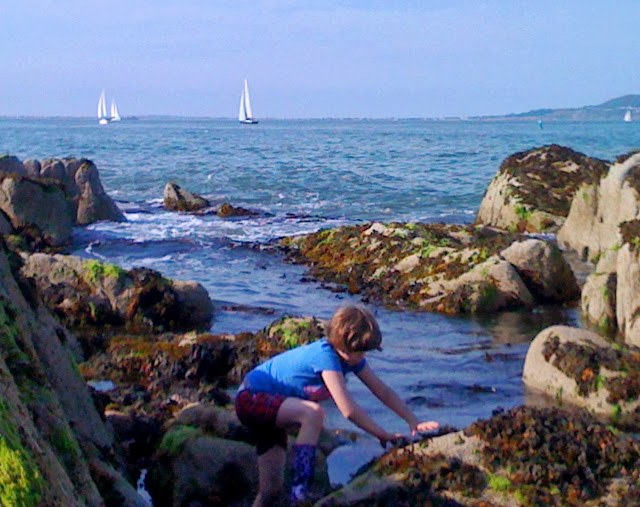 After years without a proper summer, Ireland finally saw months of warm weather and sunshine; even into September we were wearing shorts. The weather finally broke today, with torrents of cold rain falling around our house in the encroaching darkness, but we had a full season to remember and sustain us. 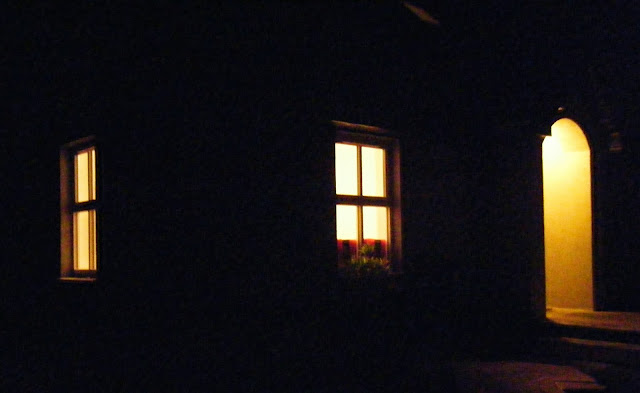 Posted by Brian Kaller at 23:41 No comments: