I'm about a week late in announcing this, but the Dallas Morning News published an article of mine recently -- it was a condensed version of the one that apppeared in Front Porch Republic a few weeks ago. My sincere thanks to the DMN editors and to the departing Rod Dreher, whose blog is one of the few I check daily.

I'm taking a break for a few days while we try to get proper Internet out here. See you in the new year. Have good holidays.
Posted by Brian Kaller at 15:57 2 comments: 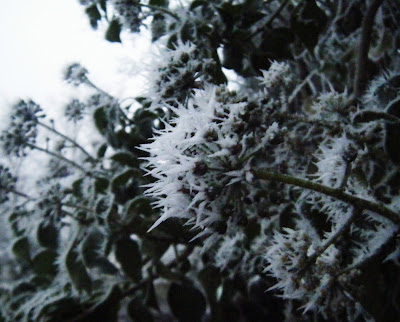 Snow and ice are rare in Ireland -- the winter hovers just a few degrees above freezing -- so no one we know here can remember a white Christmas.

But today, temperatures dropped to several degrees below, the lowest I've ever heard of here. There was a brief moment of real snow on Christmas Day, and everything around us is frosted.

Photo: Our elderberries in ice.
Posted by Brian Kaller at 22:21 No comments:

Trees by our house 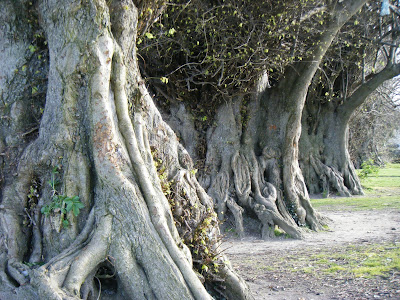 We move in Monday

... to our new house, on our land by the canal. It has been more than two years of work, but the house is almost complete. This weekend we need to spend all our time oiling floors, finishing up details, cleaning everything in the new house, packing our things in the old house, and after that, moving all our belongings.

I might not be blogging a lot. Stay tuned.
Posted by Brian Kaller at 23:59 No comments: 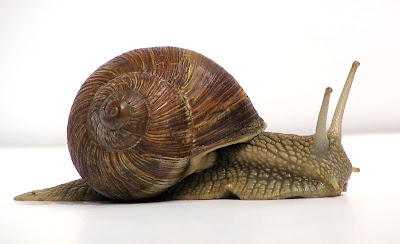 Attitudes toward food change constantly, and perfectly edible food that is shunned in one era might be highly prized in another. Early European colonists in America almost starved before eating the lobsters all around them, and even then they were considered disgusting, used only for feeding prisoners and servants and baiting fishhooks. Only about a hundred years ago did lobster become prized as a delicacy, until today it drives an industry worth $280 million in America alone.

People today have similarly strange attitudes towards snails. They command a high price in expensive restaurants, where they are shipped in from France at great cost – yet we might have hundreds of identical snails in our own garden, and try to get rid of them.

The common snails seen in Irish gardens are the same species as restaurant snails, and are perfectly edible – you are not likely to see the few bad-tasting or endangered species. In fact, that's how they came to be on the islands -- they are not native to Britain or Ireland, and were brought to England by Romans specifically for breeding and eating, only to get loose -- as rabbits would do under the Normans a thousand years later, and grey squirrels a thousand years after that.

To this day, a few people here raise them in their homes or gardens for profit or food, and they are about the lowest-maintenance livestock – if that’s the word – that you can keep.

Snails love to crawl up wet walls and can often be seen in large numbers after a rain – in the day, or when it’s drier, they wedge themselves in crevices and hide in their shells. Take some children with you, and gathering them will be as fun as finding Easter eggs.

Even snails raised in the safest environments would need to be starved for at least two or three days, and these days there is a particular danger they may have eaten poison or pesticides, so keep them at home and feed them for a while until anything bad has passed out of their system. I keep mine in a plastic tub with air holes for a few weeks, and each day I clean out the tub and give them slices of organic carrot. Some recommend only a week or two to clean out the toxins, but I like to be on the safe side. Don’t give them any food in the last few days before cooking them.

To cook snails, wash them and place them to one side and boil some water. Snails don’t have much of a brain stem, but if you are concerned about their feeling pain you can place them in the refrigerator while the water boils, and they will go to sleep.

I toss them in the boiling water for about ten minutes, pour them into a strainer, run them under cold water, and with a skewer fish them out of the shell. Cut away the gall, the last piece to come out of the shell.

I like to fry a few slivers of finely-sliced rashers (bacon) in a pan and fry for a few minutes until they are lightly done. Then I toss in a heap of de-shelled snails, stir and cook for about ten more minutes.

I add some spices and finely-chopped scallions about five minutes in, a big colander of washed parsley right before the end and sautee the lot for a minute or so. Finally, I glaze the pan with lemon juice. I then serve them over diced salad with avocados. You, of course, can experiment with whatever way you like best.
Posted by Brian Kaller at 18:40 2 comments: 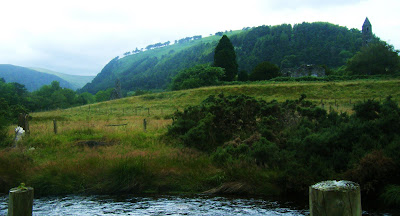 Posted by Brian Kaller at 12:04 No comments:

... over at the admirable web site Front Port Republic, which has run this article of mine.

If you are not familiar with FPR, it is a haven for "crunchy cons," old-fashioned conservatives, distributists, conservationists, agrarians, Luddites and a diversity of other thinkers. They tend to be genuinely conservative in a way that modern neocons are absolutely not, but lie as far outside the US media's left-right spectrum as Duluth and Biloxi lie outside the St. Louis/Kansas City spectrum.
Posted by Brian Kaller at 00:17 2 comments: 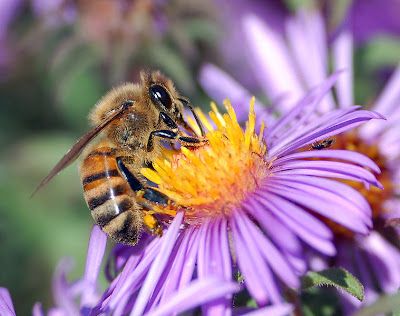 People have worked out relationships with all kinds of animals – cows and other grazers for milk, chickens and other birds for eggs – and we care for them in exchange for a share of what they produce naturally. We have very few relationships, though, with the vast majority of animals, the insects. Except for silk caterpillars, raised by specialists, there is only one insect that most of us can cultivate – bees.

People have probably been keeping bees for thousands of years, giving them a place to live in exchange for a share of their honey. For most of that time, though, they were kept in simple containers like skeps – essentially baskets – which had to be broken and the hive destroyed any time the honey was harvested. In 1852, a Pennsylvania vicar invented the beehive that is still used today – a wooden box with several frames inside that the bees can use to make honeycombs, without sealing the frames together. Each frame can be pulled out and checked, the bees inspected for disease and progress, and the honey extracted, all with only a brief disruption to the hive.

Bee hives can be kept easily on a small plot of land, and some people keep them in their back gardens. Most bees will forage for pollen in a radius of several miles, so it doesn’t matter much if a hive is located near homes. All the same, most bee experts recommend keeping the beehive inconspicuous and pointing away from neighbour’s driveways, so the bees’ runway flight is not likely to get in people’s personal space.

Honey is the most obvious advantage to keeping bees, and the honey can also be made into mead, or honey wine. But bees also produce wax that can be used for everything from candles to skin creams – some people chew it like bubblegum. Also, bees of course have the natural function of pollinating plants, and most beekeepers say their garden yields increase dramatically once they have a hive nearby.

What would ordinarily be a diverting hobby takes on a special urgency, of course, because so many bees around the world -- the source of so many of our crops -- are dying from obscure causes.

Most beekeepers recommend placing the hive on the north-facing side of a windbreak, open to the southeast sun so the bees get warm as early as possible in the morning. The hive should be level on dry land, and water should be set nearby so they can get a drink – one beekeeper recommends putting a small bucket of water nearby with a piece of Styrofoam floating on top, so the bees can have a place to stand while they drink.

To get started, you need a few basic materials. Of course you need a hive, and you also need a bee suit, gloves and a smoker – the smoke keeps the bees calm while the beekeeper does their work. Most of these materials can be purchased for a few hundred euros from any one of a dozen or so companies.

I can’t speak about beekeeping from firsthand experience, but I plan for that to change this spring. By March or so, I hope to give a step-by-step account of how to set up one’s own hive – and perhaps what not to do.
Posted by Brian Kaller at 00:51 1 comment: 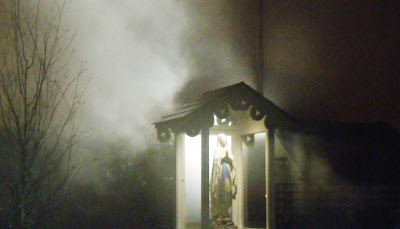 Along with the high waters our area saw dense fog the other night, here billowing around the Madonna.
Posted by Brian Kaller at 18:55 2 comments: