Hello everyone. As I mentioned, the last couple of years have thrown my life into some chaos, and not just because of the pandemic. Now, however, things have settled down, I’m writing again, and will have original material ready in the new year. In the meantime, have a great Christmas.

This time of year, my daughter used to have one favourite story: Raymond Briggs’ Father Christmas, the story of Santa’s rounds on Christmas night. It’s one of my favourites as well, if for different reasons.

Such an unsentimental portrait might sound depressing, but it makes Santa more human, and more comprehensible, than the usual laughing caricature. Briggs makes him a hard-working man performing a service we value; Briggs could easily be showing the daily routine of a miner, a fisherman or a farmer. At one point Santa passes a milkman also making deliveries, and they exchange pleasantries without stopping – and even on Christmas morning, the milkman must make his rounds as well.

What I particularly like, though, is that Santa seems to live on a homestead. He starts his morning gathering hay for the animals, is pleased to find two winter eggs from the chickens, and has breakfast with tea. He stokes the small stove, similar to the one we use to burn our bog turf. You wouldn’t be surprised to see a vegetable garden or greenhouses out back. 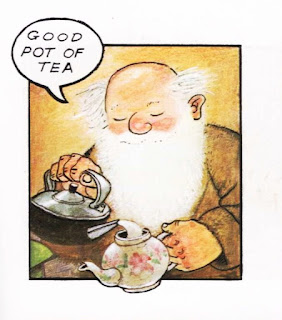 The book doesn’t say where he lives, although children here say Santa lives in Lapland – northern Finland --- rather than the North Pole. From the tea to the Christmas pudding, though, it looks like working-class Britain in the mid-20th century, the “deeply conservative land” that David Kynaston shows through contemporary diaries in his impressive Austerity Britain. It’s the Britain G.K. Chesterton or C.S. Lewis might have recognised, the life an old man might have lived in Britain when the book was written in 1973.

Father Christmas and Austerity Britain would seem two very different books, but they both focus on the similar cultures, eras and intimate details of living – supper, chores, schedule. Minutiae like this bring earlier eras to life in a way most histories miss, and offer a casual vision of an austere but civilised world that we might be able to revive, as an alternative to worse futures.

In a small room Father Christmas sleeps under quilts, in long johns, with a hot-water bottle, for heat was precious. The bed-stand looks of rough wood, as though he carved it himself, and on it he keeps his teeth and a wind-up alarm clock. The concept of a carbon footprint was decades away when the book was written, but without adding anything for flying reindeer, Santa’s would be close to zero.

As he makes his rounds, we see English farmhouses by moonlight, and my daughter pointed out the details she recognises --- bicycles, water barrels to catch rain from gutters, sticks crossed in the garden for peas to climb. Sometimes Santa has to crawl out of the stove, for people cooked with wood or coal and the oven went to the chimney.

The whole story, of course, made more sense when it was gaining popularity in the 19th and early 20th centuries; most children were familiar with sleighs or lumps of coal, and hung their stockings by the chimney anyway, to dry. The oranges we received in our stockings were meaningless to us in the 1970s but precious to our forebears; they were from exotic lands. In “A Visit From St. Nicholas,” Mama was in her kerchief and I in my cap because the houses were cold. Children a century ago would not have found such verses cryptic, any more than they would stables and mangers.

When we take pleasure in these things, we peek through cracks in the wall of stress and excess and see another, older world on the other side, and realise that it too can bring comfort and joy.
Posted by Brian Kaller at 20:01 No comments: