Farmer’s Markets are springing up all over and the , as farmers, towns and shoppers discover their advantages.

They can give farmers additional income for farmers in today’s difficult climate, and fetch higher prices for crops by cutting out the middlemen. They diversify crops, so that a bad year for one type of plant does not mean a total loss.

They mean that more money is spent in the local economy, and it circulates in the locality for longer. The organisation Friends of the Earth has found that people who frequent Farmers’ Markets also spend more in surrounding shops on market days, so they are good for local business. People who buy from markets get healthier food than they would from supermarket produce that may be shipped from around the world, as vegetables lose nutrients the longer they are stored.

Finally, the small farmers who supply farmers’ markets offer jobs to people instead of machines, as on Liam Ryan’s farm in . Ryan owns the 13-acre fruit-and-vegetable farm in Ballytor, sells his goods at Newbridge’s new Farmers’ Market.

While most farms still use the oil-powered machines that have taken over food production in the last century, Ryan finds human power to work best on a small scale.

“It means we can’t grow potatoes,” he said. “It’s hard to compete with machines. But we can grow French beans, tomatoes, carrots, all kinds of things. We also try to produce not just what will grow, but what grows well in this climate, as opposed to peppers or aubergines.”

“Farmers’ Markets create a win-win situation for everyone,” he said. “People know you, so they know where their food is coming from, and growers understand their customers because they are right in front of them.”

, he said, doesn’t have the long tradition of farmers' markets that other countries do, and until recently many of the vegetables grown were basics like potatoes and cabbage.

“The modern version is more cosmopolitan,” Ryan said. “Horticulture was very underdeveloped here, and most farming was grain, dairy and meat.” 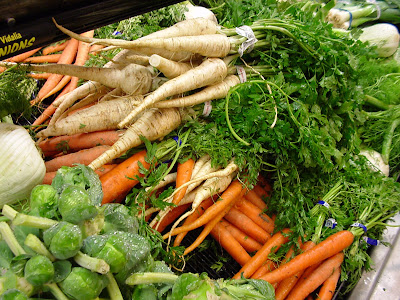 For these reasons, markets would be a boon in any era, but the end of cheap oil gives them greater urgency. Ryan may be one of a select few now, but in a few decades other farms may have to follow his model.

“We’re seeing what happens from
giving the Chinese all our business, and using our new money to buy all these cheap things,” Ryan said. “They haven’t necessarily made our lives better, but they’ve taken away a lot of our local self-sufficiency.”

If we didn’t have the small farms and
a lot of local things like the farmers’ markets, and something happened to the oil supply, people wouldn’t know where to go,” Ryan said. “My concern is that it will happen too quickly, before people have a chance to build back the local infrastructure.”