Thoughts on the past and future 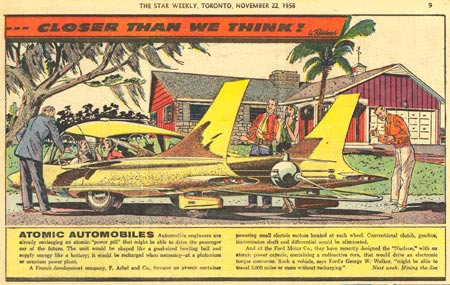 A few posts ago I criticised the idea of progress, that everything has changed for the better and will continue to do so in the same way, on the same path forever. I explained how previous generations grew up in what we would consider poverty, yet in certain times and places were better educated than most Westerners today. Rural Ireland a few decades ago had poverty much greater than that of inner-cities today, yet their crime rate was miniscule. Americans in the 1950s rated themselves much happier than their grandchildren today, despite a veneer of technological improvements.

I also criticised people's tendency to change the subject to terrible things from those same eras -- polio, for example, or bigotry. Bigotry cannot be measured, and I'm not confident that it exists less now than in 1950s America -- it's just been shifted around a bit. Polio has disappeared but other diseases have appeared that did not exist then. Even if you accept, though, that in some ways those times and places had terrible things -- they did -- that doesn't negate their positive qualities. Bringing back family dinners and classical education wouldn't bring back polio as part of a package deal.

If our generation stands at the pinnacle of history so far – if everything before was just a prelude to us – then the same mythology leads us to expect that the future will continue on this path. Ask someone today to describe the future – whether in kindergarten or an old folks’ home, white or black, rich or poor – and they will casually shrug and describe flying cars, mile-high skyscrapers and casual space vacations. No one seems very enthusiastic about it; it’s just that everyone has been raised with those images for the last century, and told such a future is both inevitable and good.

No one stops to consider the logistics of any of these futuristic developments. Take cars flying overhead – how do look out for crashes in three dimensions, including under the car? What happens when they crash over a city? What happens to people under exhaust vents when you try to land?

You can see the same meek acceptance of self-driving cars today. Companies talk enthusiastically about making them widespread, but most people struggle to muster much excitement about it. Nor have I ever seen a news article that talks through the effects of such a technology – who gets sued when it crashes? What happens when (not if) its controlling computer is hacked? How easy would it be to put a bomb on a self-driving car and drive it anywhere?

Moreover, when news media show image of the future, they tend to assume that our social problems have been solved; that a world of mile-high skyscrapers or flying cars would somehow be more peaceful or healthy. Yet covering the landscape with traffic jams didn’t make us healthier, and creating giant urban housing projects only ten stories high just created slums. Why would moving further along the same path produce different results?

Finally, few people ever point how long our culture has clung to the same hopeful images of the future, all without proving they would be an improvement, and all without making much headway towards them. Illustrations from the 19th century described a future of helicopters and futuristic machines, and silent-movie comedies like Modern Times parodied a future of constant surveillance and labour-saving devices. Magazines in the 1950s and 60s teemed with articles describing the flying cars and domed cities readers were to expect in the 1990s, while “futuristic” movies in the 1980s and 90s depicted the amazing future of the early 2000s. Such amazing futures have always been a decade or two away for more than a century, and a century from now futurists might still be telling us they're just around the corner.

Yet humans haven’t been to the moon since 1974, and space programmes have quietly been shut down as the spacecraft have gone obsolete. Technologies like nuclear power turned out to have their own problems, and some genuine improvements – say, vaccinations – have become less common as people have grown fearful of them. For generations of people raised on myths of the future, it turned out to never arrive, or be a big disappointment. 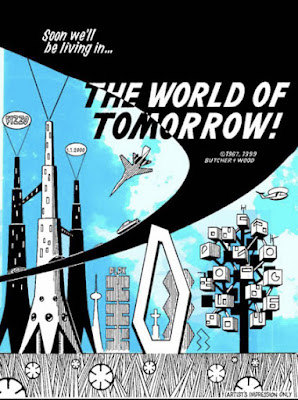 When I point this out to modern people, many grow defensive – a sign that they had a lot of dreams invested in certain images of the future – and say things like, At least our lives are an improvement over the past. But that brings us full circle; compare modern Ireland to the traditional one, or the modern America to the America of a century ago, and you’ll find that suicide rates are higher crime is higher, and many things have declined, despite certain improvements. We strain to continue our faith in a futuristic future, yet the past looks better all the time.
Posted by Brian Kaller at 22:26

Brian
Indeed worth a thought - the nonsense of cars with nuclear power engines reached Britain in my childhood, along with future electricity "too cheap to meter".

A friend a few years ago pointed out to me that some of the futuristic plans have appeared in stories like Star Trek. In particular the odd twin-engine design slung outside the main body of the Star ship seems to have owed something to the cancelled US nuclear powered flight programme. See the HTRE-3 https://en.wikipedia.org/wiki/Aircraft_Nuclear_Propulsion

But we have communication buttons do we not? What does that tell us? For the rest, what a curious mix of childish fancy and extravagant grandiloquent gesture! Some of those towers in your illustration actually got built. Note the gesture to 'democratic inclusion' in observation platforms and restaurants. This one comes pretty straight from the 'comic book' drawing board. https://en.wikipedia.org/wiki/CN_Tower

Other persons' dreams are boring, so skip this bit, but I dreamed a decade or so ago I was at the edge of City – looking across to a coast or Firth of silver sea beyond a far-off downtown. I was in a leafy low-rise suburb of very modest housing spread on several low ridges. We had knowledge of a vast space-going launch many miles away inland that was about to take-off. Then I 'saw' the enormous craft malfunction above the hazy clouds and turn over the city - a great ghost ship falling to ground. It had the appearance of an enormous gothic cathedral of one main projection conjoined with twin lesser fuselages either side. The enormous flood of crashed burning fuel engulfed the landscape, bursting over intervening ridges. We little people were running, trying to take decisions as best we could. I guess I had watched one Star Trek too many! Smile.