A different kind of childhood 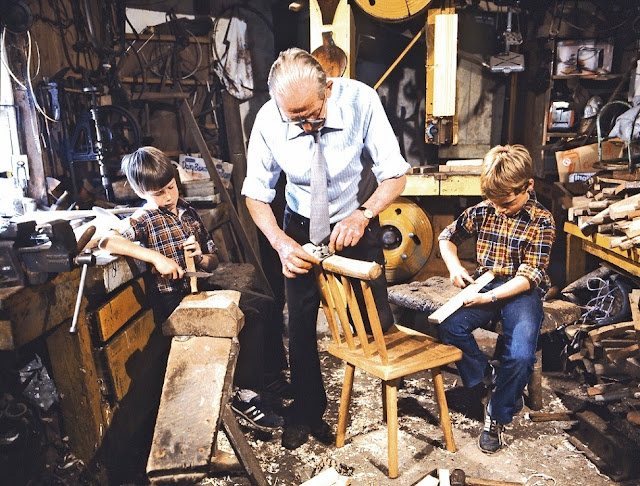 When I ask most modern people to remember a particular decade, they usually remember the television shows and video games that took up much of their young life, or the clothes and hairstyles that were fashionable. They remember what Hollywood celebrities were doing at the time more than their own lives. They don’t typically remember what my elderly neighbours do, like the wildflowers that grew in a particular meadow, or peeking as children into the nests of herons and listening to the eggs. They don’t remember playing children’s games, or exploring the woods, or swimming to an island in the middle of the pond, or declaring themselves kings and princesses of their newfound lands. Most of them never had the friendships to even have such adventures – people moved around too much, or were always playing video games -- even if they had been allowed to roam, and even if there were any woods to explore.

Most people my age spent 20,000 hours of their best years warehoused in a school that looked like a prison, but few remember anything they learned. Most remember spending many more hours in the backseats of cars, but never rode a horse or sailed a boat as children, or did anything that depended on skill and subtlety. Most modern people grew up with enough toys to fill an orphanage, but remember few of them, no more than their own children can remember the fifteenth toy they received last Christmas.

Perhaps most importantly, most people my age don’t remember ever having done anything useful. As children they might have been indulged or ignored, but when I ask if they ever contributed to the family, most are confused even by the question. A few cleaned their room or raked leaves outside. But few people my age grew up feeling necessary, or learning any skills, or feeling alive.

As working adults, most people I know spend their waking hours moving electrons around a screen, but they are still not necessary, and they feel it. Most depend entirely on electricity, but have no idea where my electricity comes from. They depend on pressing a button to keep warm, but don’t know what the button does. They need purified water from the tap, but have no idea where it comes from, or how pure it really is, or how it could be cleaned.

They know the president, but not their mayor or councilman, and know more about their favourite movie star than the old lady down the road. Most, I expect, have spent far more time watching others make love than they have making love themselves, and have spent thousands of hours watching actors feign death but have never bathed a body for burial.

Many Americans these days see family only on uncomfortable holidays, have no traditions to pass down, and little knowledge of songs or stories older than their parents. Most have spent their lives drifting across an ocean of strangers, committed to nothing and no one. No wonder suicide, which was once rare, has become a common cause of death. Most people don’t kill themselves in any identifiable way, of course – but when I return to my native country, I see many people who have ballooned in size, or require drugs of one kind or another to get through another day.

Even those who are nominally successful – who live in houses the size of barns, drive trucks the size of school-buses and have enough toys to stuff an orphanage – remain deeply unhappy. One way or another, they grow angrier every year; they know in their bones that something has gone terribly wrong.

Most of them know they’ve lost something, and search for it in different ways. Some of my friends build things in their shed, or cook, or in some way find pleasure in creating something. Some read books about people who lived more traditional lives, anything from Amish romances to medieval fantasy. Some drive off on weekends to hunt or fish, something to get them back to nature, and draw far more from their surroundings than from the animal. Some understand how much of the natural world has already been lost, and march in the streets to shout about it, or buy “eco-friendly” products with pandas and dolphins on them. Some of these approaches do more good than others, but I don’t mock any of them; all these people, I think, are trying to fill the same void.

The rural Irish around the same time offer an even more extreme contrast, with almost no money and what we would consider desperate poverty, but with an even lower crime rate than Americans had at the time, and with a literate, healthy society. Talking to people from these eras, I realised, could help us identify what the world has lost, and could restore.
Posted by Brian Kaller at 20:10

Another interesting addition on this theme, Brian, thanks. The gulf is so wide between the useful past that I feel, even at 54, like I'm walking among a different species. That my memories are now part of some obscure specially-curated exhibit in a museum no one visits.

I wrote about a related topic on my little farm blog recently, The Experiential Life: http://www.wingedelmfarm.com/blog/2017/03/05/the-experiential-life/

I will look through the blog, and good luck with it. Our garden is still being rebuilt, but we have some things planted, and everything's growing fast during these 18-hour days. Thank you!

Maybe we should make some kind of internet platform for Catholic cultural restorationists. Trade recipes.
http://anglocath.blogspot.it/

... btw, I was also raised in part by people who were born in the late 19th and very early 20th centuries. My English grandparents were among the very early pioneers on the British Columbia coast in the early 19-teens and 20s. They helped to found and build the town of Parksville at that time, and after a stay back in the home country during the war, returned to BC to open a business - a dress shop - and help build up Vancouver Island arts community - pottery and painting. Later, in the early 60s they bought a blank slate piece of property on a little inlet on the other side of Nanoose Bay - a place so out of the way at that time it didn't have a name and the road wasn't paved - and built a house from scratch, then set about turning the thin and rocky soil into a little pocket of an English gardener's paradise. It was in a little enclave of English and Scottish ex-pats, all born around the same time who also built their homes in similar style up and down that unpaved road. And I was growing up among them like Alice, taking tea and playing scrabble with the Scottish ladies next door, doing the garden with Grandpa and my Uncle Frank down the road. Learning drawing, painting, pottery, cooking and housekeeping from Grandma. It was a kind of earthly paradise that I have spent my whole life trying to recreate. I lived most of the time down in the city with my mother the hippie feminist (who was also a real scientist, so taught me all sorts of other useful things) and I saw which way the cultural wind was blowing in the early 70s, and knew from a very early age indeed that I didn't want to go there. The new anti-rational principle was already taking hold on the institutions at that time. I watched the social revolution happen from ground zero and I knew even in childhood that it was a terrible, catastrophic mistake.

Ever since leaving Canada it has been my own personal dream to recreate a sane anti-modern life, and then find some way to share it with younger people who may not ever have experienced it.