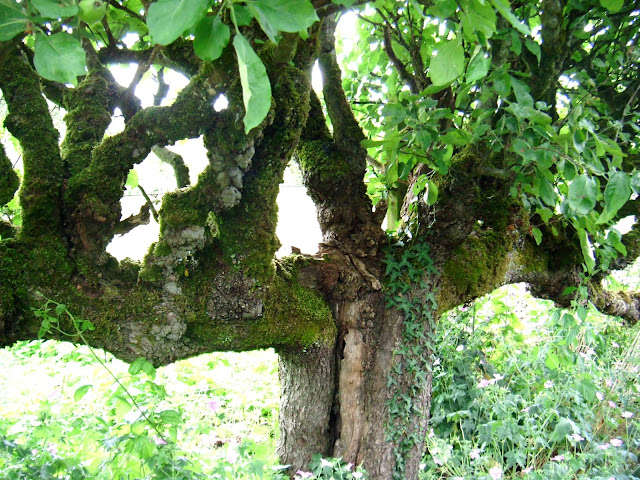 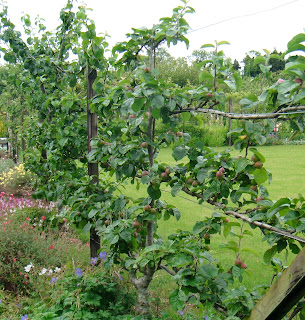 Espalier trees can be grafted like other fruit, so that a single tree could grow multiple varieties on its branches. I know of no upper limit to how far an espalier can be stretched, nor of how many grafts a single tree can take; the BBC reports that gardener Paul Barnett in West Sussex, UK grows 250 varieties of apple on a single – admittedly non-espalier -- tree.

Hi Brian,
The pruning technique you describe in your post was developed in France and Belgium (Vilvoorde) in the early and mid-19th century and was called "la taille raisonnée", or "reasoned pruning". This technique – espalier and all kinds of other, even fancier tree forms – was studied in the second half of that century by a Dutch tree grower, Jac. P. R. Galesloot, who spent the rest of his life propagating it by giving free demonstrations at his tree nursery, called "Pomona", just outside Amsterdam's old city walls (1870–1896). His trees were exported all over Europe and to America, also. In the early 20th century, he published a book about growing fruit on walls of houses and farm buildings.
Of course, this technique is much older, but fell into disuse from the 17th century onward. Before then, estate owners had grown their fruit, even apricots and figs, on so-called "snake walls", south-facing, undulating brick walls, which preserved the warmth of the sun better than straight walls.
Google "slangenmuur", Dutch for "snake wall" and click images to get an impression.
All the best,
Ronald

I am beside myself due to how incredibly cool of an idea this is. Something that can make chain link fence not only un-ugly, but fruitful (yeah, had to go there!)?? Amazing. Thanks so much for posting.

Hi Brian,
for the record I have successfully grown peaches espaliered against house walls and fences for the past 40 years. (5 trees in 4 different locations.) Our climate here around Georgia Strait in British Columbia is probably better than yours, - latitude about the same as Devon and some rain shadow improving our sunshine hours.

The great thing about peaches is they fruit as young trees, our five year olds had bumper crops this year, with first fruits at about year three.

We are now trying almond trees espaliered against a fence.