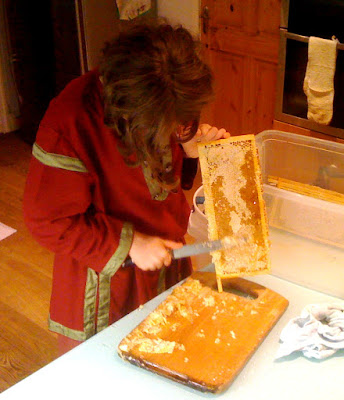 Through a year and a summer I have kept our bees in the back corner of our property, their hive looking out onto the thick wildflower fields of the Bog of Allen. Through all the seasons I have gone through the ritual, every month or so, of putting on the white suit, lighting a fire in the hand-held smoker, sedating them, and opening up the hive. I – and occasionally my daughter -- have fed them sugar-water, checked for mites and other signs of disease, and cleared the summer weeds that were crowding around their home.

We watched them slowly line their wooden box with wax sculptures of geometric precision, and fill these shapes, bit by bit, with a treasure that they guarded like dragons guarding gold. Then, last weekend, finally, we took some of their gooey hoard for our use, payment for room and board.

People have worked out relationships with all kinds of animals – cows and other grazers for milk and meat, chickens and other birds for eggs and meat – but have few such relations with the far more numerous and important invertebrates of the world. Snails might have been among the first domesticated – if that’s the word – animals, as pots with many snail shells have been found at archaeological sites, and the Chinese guarded their relationship with the silkworm for three thousand years. We have nothing else in our civilisation, however, like our relationship with bees – indeed, there are few living things like bees in the world. A century ago the Afrikaans naturalist Eugene Marais proposed that a termite mound should be recognised as a single animal, a termitiary, and we could do say much the same of any apiary.

Our relationship with bees goes back so far that it has affected the evolution of third-party species. The honeyguide bird of Africa leads humans to hives so they can get the honey, which they share with the bird – something that must have been worked out over millions of years, before we were truly human. Many ancient societies kept bees, apparently developing the relationship separately in places like Egypt, China and Central America, and no self-respecting monastery would be without bees for mead and candle-wax.

For most of that time, though, they were kept in simple containers like skeps – essentially baskets – which had to be broken and the hive destroyed any time the honey was harvested. In 1852, though, a Pennsylvania vicar invented the beehive that is still used today – a wooden box with sliding frames inside that the bees can use to make honeycombs, without sealing the frames together. Each frame can be pulled out and checked, the bees inspected for disease and progress, and the honey extracted, all with only a brief disruption to the hive.

Not only do they give us honey and wax, but they are very helpful in pollinating our plants as well, the reproductive solution for living things that must procreate but cannot move. Flowers grow for their benefit, not us, and bloom in more colours than we can see – only their superior eyes can see all their shades and patterns. Any good gardener would benefit not only from the presence of bees, but from planting crops specifically designed to attract them.

If you want to plant for bees and other pollinators, you need to plant foods that bloom in early spring and late autumn, the off-season months when bees struggle to find enough food. Snowdrops, crocuses and daffodils give bees their first taste of nectar for the year as honey stores run low. Ling heather, the plant used to make thick heather honey, does the opposite, blooming after everything else has gone, although its honey is too thick to extract the usual way.

One of the champion bee flowers, in our experience, is borrage – our bees go nuts for it. We find that verbena draws legions of bees and butterflies--- my wife and mother-in-law bought some from a garden store after seeing one covered with them. Almost all herbs, in fact, make great bee fodder – thyme, rosemary, oregano, marjoram, sage and mint. Our local beekeeping society also recommends poppies, cornflowers, forget-me-nots, zinnias, wallflowers, bellflowers, dahlias, hellebores and roses.

I could probably have harvested honey from them last fall, but I had only gotten the bees a few months earlier, and I wanted to give them time to settle into their home and accumulate some honey their first year without interference. It turned out to be a good decision; to my surprise, when I checked on them a few weeks ago, I found that they had not completely filled the “super,” the removable upper box where the bees keep most of their honey stores. Some of the beekeepers I talked to suggested that they were a small colony when I got them, and it took them time to build up their stores.

You might think that honey is honey, but in fact, no: beekeepers try to avoid getting honey from certain flowers, like rapeseed, while others are particularly prized. Ivy honey, they said, was difficult to get out, and heather honey can’t be extracted in the usual way – it’s so thick it requires a press.

You could see as much when we brought the “super” in and the honeycomb frames were all slightly different colours; the bees had filled them like typists filing papers, month by month, and each was filled with the honey of the flowers that were in bloom at the time they were filling it.

Before harvesting the honey, I had gone to a meeting of the local beekeepers’ society to learn how to use an extractor, and they had generously lent it to me for the weekend. The extractor is basically a bucket with a wire frame inside, into which you can place the wooden frames of the beehive, heavy with their wax honeycombs. You then take a heated knife and slowly run it over the wax surface of the honeycomb, removing the “caps” that keep the honey from dribbling out inside the hive, and then set the frames inside the extractor.

When the extractor is full of frames, you crank the handle and centrifugal force flings the honey at the sides of the bucket. You’d think it would be a sticky business wiping all the honey off, but in fact honey is usually quite runny and neatly collects at the bottom, where you can simply open a valve to drain it into jars.

We got several jars of honey out of the business – more than a year’s supply, and enough left over to make mead, or honey alcohol. We also collected the beeswax, which not only makes the best candles, but that we will use to make skin cream. 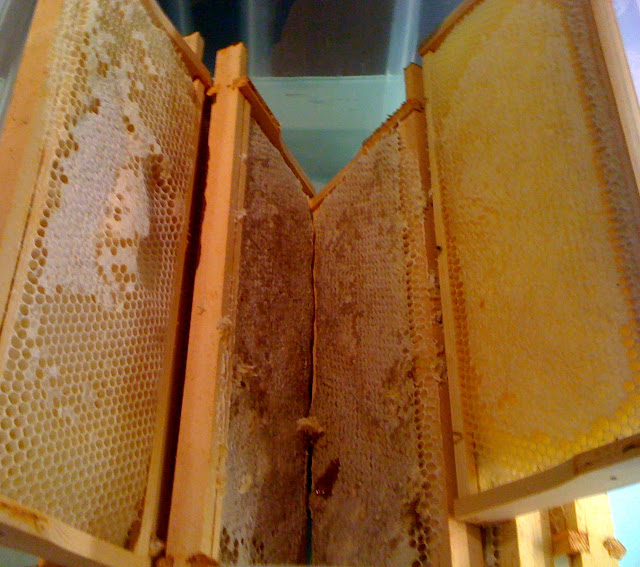 I had assumed I would put the hive’s upper story when I was done, for the bees to re-fill over the coming year. In fact, the beekeepers in my local association said they leave it off during the winter – the bees have some honey stores in the lower decks anyway -- and feed the bees sugar-water to keep them going. If you let them go over the winter, they said, the bees will create honey from ivy flowers and other things they find difficult to extract.

They are experts at this, and I’m just a beginner, but I will note that not all local beekeepers do the same; some have embraced ivy honey for purported health properties – like the tea-tree-derived “Manuka” honey – and encourage the bees to stockpile it in order to extract it in spring. I also thought that the hive has been through quite a trauma, and that keeping the super on – and allowing them to fill it with ivy honey over the winter – might be less stressful for them.

Any opinions from beekeepers out there?
Posted by Brian Kaller at 17:18

The Abbe Emile Warre has a Wikipedia bio only in French. I have found one of his principal books in English translation, as a free download, at http://www.users.callnetuk.com/~heaf/beekeeping_for_all.pdf (but I have not read it; this link I have obtained from https://en.wikipedia.org/wiki/Beehive#Warr.C3.A9_hives, at which I have only glanced).


Cheerfully, but in haste,

Thank you! I didn't know that bees have dialects. I'm told that some (apparently very bored) scientists gave bees cocaine once, and found that they began to exaggerate -- "There are HUGE flowers over there!"

Great to hear your experience is successful so far! In New England there are no flowers blooming from the time the asters close up (in October) to those crocuses blooming (in March) so there's no "ivy honey" to be had. Around here people usually put the extracted super back on top of the hive - above the inner cover and beneath the outer cover - for a few days to allow the bees to clean it out. They'll usually move the leftover honey down into their lower stores. Then you put the cleaned comb in your shed for the winter. Which, by the way is important because you need several days of deep freeze to kill off the wax moth, which otherwise will destroy any comb the bees aren't occupying. You don't get any deep freeze in Ireland, so I'm curious whether the beekeepers there have trouble with wax moth - or whether they put stored frames in the freezer ever.

And also beware that any box of frames sitting around is irresistible to mice who consider it the perfect place to lodge in! After learning this cruel lesson a few times, I set mine on a sheet of metal and keep an extra outer cover over them.

Brian, I have no advice or suggestions to offer, but did want you to know this inspired me to - finally! - take steps toward establishing a hive here. Thanks for that!

Brian
Same as for gwiz - inspirational - we are getting there.
Bro'-inlaw does African design horizontal top-bar hive - he saw it when working in Malawi / Uganda.
Espalier (other post) goes with bees.
We have 19thC orchard with succession of flowering times - and it could be a way of preserving the old successive varieties. (They also ripen successively and have different 'keeping' times.)
We want to do 'espalier' blackberries.
We freeze fruit over winter to extend nutritional benefits.

Sorry I have merged both subjects together.
best
Phil