Making Your Own Tools 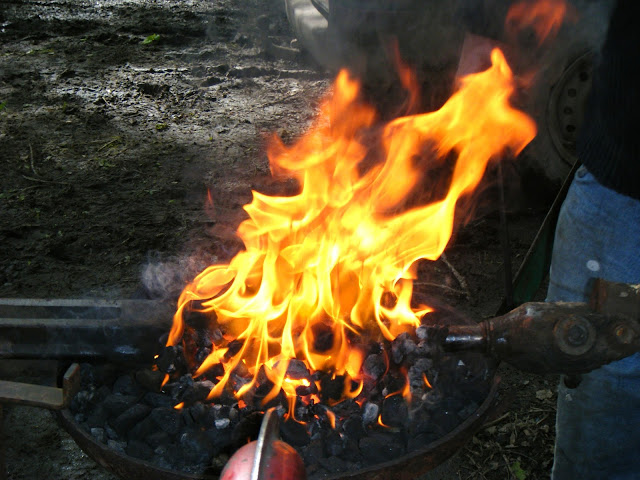 Blacksmiths often held a special status among traditional people; when your plow bent or your scythe broke, he kept your family alive. They must have seemed like alchemists, turning bare stones into gleaming jewellery or fierce weapons; here in Ireland even their homes looked different, with a bizarre keyhole-shaped door that announced the resident’s craft as clearly as any barber pole or butcher sign.

Try blacksmithing for a short time and you respect them yourself. Metals like copper or tin can be hammered into shape cold, but iron needs more than a thousand degrees of heat to become malleable; for those temperatures you need charcoal, a forge and a continual blast of air, along with the skill to know what you’re doing.

I do not claim to have such skill, but under the guidance of two excellent tutors, I was able to take a rusty piece of discarded machinery and, by heating and pounding it many times over two days, flatten and shape it into a useable machete. The course was one of many offered by the Irish organization CELT, and hosted at the Slieve Aughty Centre in County Galway.

We started by creating a forge – in this case, out of clay, sand and horse manure, mixed and shaped like a sand castle. We cut and stapled plastic bags and wooden planks to form bellows, and used pipes to connect them to the clay structure, and soon we had something primitive yet useable. We used metal ones later to save time, but it’s a great pleasure to know that you can make a working forge from almost nothing.

We quickly learned that forging metal means a lot of time standing over the fire, holding the metal – with tongs, obviously – in just the right place to get the proper amount of heat, and withdrawing it at just the right moment. Too much heat and it sparks and disintegrates, too little and no amount of hammering can budge it. Movie blacksmiths look like bodybuilders slamming white-hot metal with sledgehammers; the reality involves a lot more frantic and often delicate tapping, as the smith has only a few seconds to make the right changes before it cools again.

In my case, I hammered the old machine part into a straight bar, flattened it into a knife-shape over the next two days, and a bit of cutting and polishing did the rest. I cut a handle from a hazel branch, heated the “handle end” of the metal until it was yellow-hot, and seared the hot metal into the handle, with a gust of steam and a few bursts of flame from the wood. The result looks a bit crude, like a weapon an orc might use in the Hobbit, but it’s turned out to be a perfectly serviceable tool.

Blacksmithing is one of the dozens of professions that were widespread in all traditional cultures, when most villages had families of craftsmen – coopers, wrights, tanners and thatchers – that now survive only as surnames. Children apprenticed from an early age, learned a skill for several years, and might have entered the working world as masters at an age when teens today are spending their prime years bored and self-destructive. 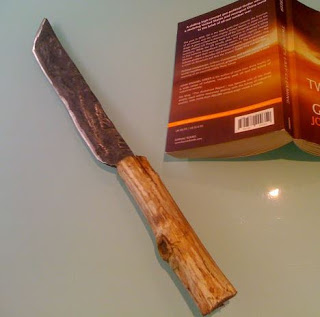 A world of craftsmen creates an economy alien to modern Westerners; instead of cheap belongings meant to be thrown away quickly, goods had to be made durable, to be fixed, recast, re-forged or re-sewn over and over, with no mountains of rubbish.

Such an economy entirely lacked the anonymous transactions that we think we depend on; writers from a century or two ago described recognizing particular barrels, nails or saddles as we would recognize someone’s handwriting, and the craftsman’s reputation hung on the quality of their work.

Of course, few people would be able to make a living as a smith anymore, but it’s a skill we should retain; plastic can only be recycled a few times, but iron can be recycled indefinitely. When the world is no longer able to mass-produce new materials at its former rate, when there is no new plastic and fewer forests, we will have billions of tons of landfill waste.

Movies like WALL-E posit garbage covering the Earth, but in real life much of that garbage would not only be reusable, but precious, and today’s landfills could be tomorrow’s mines.

For more information about CELT’s Weekend in the Hills, check them out here. If you are in County Galway, do check out the Slieve Aughty Centre near Loughrea.

Brian, I'd like to share your posts on Facebook, but you don't have a share button on your site (or at least I can't find one) and Firefox won't activate it's own share function. Is it that you don't want your posts shared?

Not at all! You're welcome to share them, with my thanks. For the moment you can log on to Facebook and simply add the link. I haven't added a "share on Facebook" button to the blog simply because I don't know how, but let me look into it.

Did a course like that myself and I must admit it is not for me. I truly admire those that handle the heat and wield the hammer. As for me I'll stick to gardening and fixing and using old tools, bought for pennies before someone does throw them away.
I agree that we desperately need to preserve these skills as I am wholly convinced we will be in great need of them sooner than we expect.
Too bad I couldn't convince my son to do so. He will be stuck in the digital world for now....having chosen to go to school and learning the "trade" of digital design.

I enjoyed the courses I took, but it's just dabbling; I learn bits of a lot of skills, but between an office job, raising an adolescent and writing, I don't have the time to really develop any of them. Some of the courses I take worked out well, and I've been doing them ever since -- basketry and beekeeping, for example -- while the blacksmithing just gave me some mementoes to take home. The bow-making was a disaster, and ended up as firewood. :-)

You're right we'll need these things again, but then, we have to make our way in the world in the meantime, so perhaps your son's choice will turn out to be the right one.

Same here, Brian.
Did the beekeeping course, but ended up keeping bees in a non-conventional way (top bar hives). I have some useful items to show for from the blacksmithing, like a steel stiker and a knife, but the violence and force required are not me.
I feel your pain, when it comes to lack of time. For me it is that during summer (60hr working weeks, a 400m2 foodgarden, building up a homestead, 2 teens and 1 about to become one, e sleddogs and oh yeah... a wife too!) and economics during winter, when the job I have slows down a lot. Just enough to keep ticking over.
I recognise a lot of the discussions you have with your daughter, but my kids are legally forced to go to school. Homeschooling is a big NO here.

I'm in a similar position with homeschooling, hence our nightly lessons. I take it you're still in Sweden?

Thanks Brian, it worked a treat!


Brian: Thanks for blogging on metalworking this month, and for blogging on bookbinding some months ago. Perhaps you will be able to do further posts on crafts in future, as time may permit?

Ron: Congratulations on top-bar hive! This may be from a human point of view less efficient than the conventional Langstroth beekeeping setup, **BUT** I believe you do get a wonderful annual harvest of clean wax.

Yes, please for a FB share! I always want to share your posts, but I have no idea how to do that on FB.