Ripples in a community 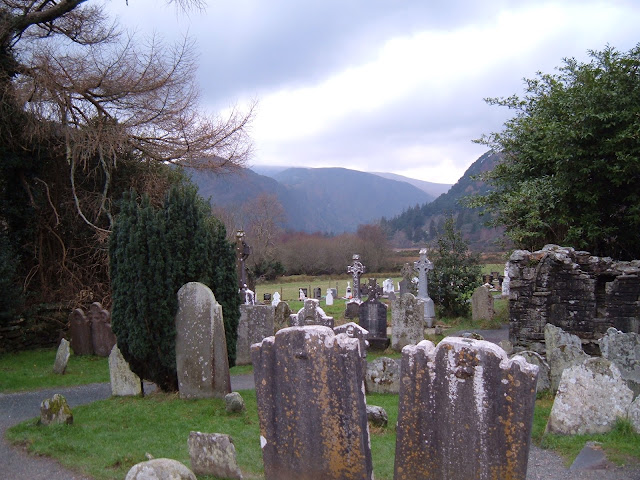 For the same reason that I don’t show my daughter’s face, I almost never show pictures of our neighbours here in rural Ireland. Many of our older neighbours grew up in a different world, growing up without electricity or cars, and talking to them is like meeting a different era. Out of curiosity, I’ve looked up a few of them online and can’t find them – possibly some of the last Westerners for whom that would be true. Certainly they don’t need to be plunged into the world of facial-recognition software and phone marketing.

Even out here, we are no longer feel community as people once did, for we no longer need each other -- we can all drive to the supermarket, order online and distract ourselves with endless forms of media. We don’t need to talk to our neighbours anymore, and often don’t want to, as a Youtube presenter will usually be more wackily entertaining than they are.

Of course, I can't judge too harshly, for I'm writing this on a computer, and you're reading it on one; they have their uses. Nor do I have the deep ties from childhood that most people have here; I'm an immigrant to this place myself.

It's obvious, though, that people here still feel the bonds of community more than most modern people I know. Sometimes I'm walking to church, for example, and a neighbour slows down in his car and asks if I need a lift, and I gratefully pile in back with his kids. In most modern societies -- my own USA in particular - people are too scared to pick up hitchhikers, until no one can hitchhike but the genuinely scary.

We see that web of reciprocity when someone dies. A young man who lived near us died a few weeks ago, and people have been talking about it ever since -- at Mass, at the pub, kids at the school, and at the shop. I didn't know him well myself -- I'd merely see him at the pub sometimes -- and of course I didn't grow up with most of the people here. Yet I could get a sense of how, in a more traditional community, everyone's actions affect everyone else, and a death most of all.

Shortly after the death, I'm told, his family held a wake, where everyone comes to pay their respects to the man and celebrate his life. The next day they had a funeral, which here usually means the family carrying the coffin from the house to the church, perhaps miles away, while all the friends march behind. Within a short time various people around us had erected a cross at the site of his death, and the flowers around it have been kept fresh ever since. We have other crosses like that near us, some from decades ago, and people still place mementoes around it.

I talked about the man's death with the teller at my credit union -- we know each other by name, and she knew his family -- and I realised how different such an experience must be from visiting a regular bank these days. I keep a separate account in a modern bank in Dublin, and they refuse to even use tellers anymore -- they rely only on ATMs, which they presumably don’t have to pay. Here, at the local credit union, I know the name of the lady that greets me, and we can talk about all the local news, good or ill.

Likewise, I talked to our neighbour down the road -- we'll call him Bill -- about buying some turf this year. Turf is the fuel we use, centuries of compacted sphagnum peat moss that has become a spongy maroon ground under your feet as you walk through the bog. Where locals have drained the bog and cleared away the brush, they then slice grooves over the landscape, so that strips of turf lie in rows like ropes of liquorice. Then we break them into chunks about the size and shape of bricks, and “foot” them, or stack them in a cross-hatching pattern so they can dry in the air during the summer months. Finally we gather them and bring them home, and for most local people that’s their winter heat.

Bill owns part of the bog near us, and it was he who cut our turf before and helped us cart it home. This time, though, he said he wasn’t sure he could.

“Your man with the tractor cuts it for me,” he said, “and he’s going out of business now. He was going to leave it to his son, but his son was the young man who died.”

In his mammoth work Bowling Alone, Robert Putnam uses surveys, time diaries and membership rolls to track the history of American social life, and the results were staggering. Social clubs like Oddfellows or Kiwanis, bowling and softball leagues, family dinners and neighbourhood poker games, political caucuses and gardening clubs – all these staples of life for decades, which had supported their members through Great Depressions and World Wars, had all diminished to a near-vanishing point.

Life in rural Ireland was less dynamic than mid-20th-century America, but you could see the same social bonds, centred around families, pubs and the Church. In fact, you could find equivalents in almost every society that has ever existed. As far as we can tell, for most hunter-gatherers, peasants, villagers or urban neighbours through history, community did not exist as an aspiration or buzzword, it was the medium in which human life took place. Most writers and philosophers in history did not even have to talk about its value, for it was the one resource no one lacked.

These days, we try to re-create community with support groups and fan clubs of various kinds, but they are Astroturf, planted to simulate the real thing where it won’t grow. Putnam quotes sociologist Robert Wuthnow in saying that “the kind of community these small groups create is quite different from the communities in which people have lived in the past. These communities are more fluid and more concerned with the emotional states of the individual … the social contract binding members together asserts only the weakest of obligations. Never criticize. Leave quietly if you become dissatisfied. We can imagine that those small groups really substitute for families, neighbourhoods and broader community attachments that may demand lifelong commitments, when, in fact, they do not.”

In a more traditional world, community isn't a hobby or cause; people need each other. When you stand in line at the shop, the person in front of you might have made the winning play for the local football team ten years ago, might coach your daughter's school, might be repairing your car next week or checking your horses, might be needed to give you a jump start on a cold morning or might make the best jam around. That's the case everywhere, of course, but in the modern world, filled with crowds and distractions, it's easy to forget.

A more old-fashioned community, though, you can see the bonds of support and obligation all around you. They temper your reactions, help you back down from conflict, encourage you to make deposits in the local bank of personal favours, and keep you from sinking too low when things go wrong. They do not free you to indulge any impulse or float unmoored through a sea of strangers, to invent and reinvent yourself endlessly according to your whims. Rather, they constrain you in all the best ways, anchor you in a cultural harbour, and limit your life to a single road taken. Enough such threads of obligation, layer upon layer, weave a civilisation.

When someone dies, everyone feels it. There's a seat empty at the pub, a pew with a space at Mass, local daughters without a father. One of our neighbours is selling his business, another might have to support himself with his cows rather than his turf, and we will have to rely on firewood rather than turf this winter. In a community like this you can see the ripples people make when they come and go, and no one goes through life alone -- alive or departed, they remain part of something larger and older than themselves.
Posted by Brian Kaller at 00:07

Well, this really makes one think, doesn't it?

Today, for perhaps the first time ever, I feel myself coming round to the view that putting Internet-connected computers into private homes (as opposed to university offices, municipal libraries, and the like) has done more harm than good.

I recall several years ago walking down a residential street on a lovely summer evening. Not a human being was visible outside. From each house came a blue flicker of television light. Back then I suppose families still gathered there in front of the box. And today everyone sits with their own screen . . . .

We have the phenomenon of:

the more people move to an area, the quieter the pubs become. This is happening all round rural Clare. People come to live in the country in inverse proportion to the number of people using the local pub (was pubs).

One 72-year-old I knew drove the 2 kilometres to the pub and back all his life, barely getting out of second gear. A whisky and two Guinnesses and that would be his limit. He was stopped, breathalysed and charged and never visited the pub again till the day he died, in his 80s. Obviously, I’m not condoning drinking and driving here - but is there not a better way? He wouldn’t accept lifts as he saw them as favours, to be repaid. So his social life disappeared and we missed his wry intelligence.

Quite a poignant, thoughtful post. It's not simply that we 'moderns' find it very hard to create community, or heaven forfend, actually *live* in one. It's that we don't even understand what that might be like. Ironically, community has become an alien experience.

I run a volunteer coordination program here in Denver for a well known international non-profit, on behalf of participants in the local urban agriculture/food justice movement, the goal of which, or so I'm told, is to 'build community,' but as far as I can tell, nobody who uses that term comes even close to understanding what it actually means. I think because of our lack of lived experience with anything resembling genuine community, we have this vague notion that it's something like a loose association of people with shared interests. The 'hobby or cause' you reference.

In fact, it's a cargo cult. We think if we emulate the outer trappings of what we see when we observe or are told about how things are in a real community, then it will magically spring into existence around us.

At any rate, thanks for another really excellent and thought-provoking post.

I'm appreciating your blog very much. These thoughts (and times) are complex. Community... The one piece I seem to get for myself at least, is that it takes time. Time and a little more time to create community. Without the time for roots to take, it just can't happen. People come and go...move and move on. I have moved. I left a place where I felt I was becoming part of a community. Yet, I do long for it. The opportunities and mobility of our times are part of the alienation.