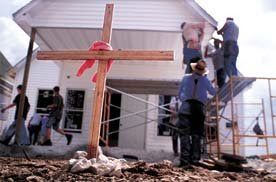 While some people spend their vacations lounging by the pool, 87 men from across the country are working in the hot sun, helping build an addition to Grandview Baptist Church outside Centralia, MO.

For most of the year, these men are truck drivers, construction workers, pastors and retirees. For 10 days a year, however, they are Carpenters for Christ, building or repairing one church a year somewhere in the United States, leader Dave Tidwell said.

"We do this the same week each year, the second week in June," said Tidwell, who has been with the group 15 years. "It’s a 10-day trip for us to do a seven-day job - it takes about a day to get there, about a day to get back, and of course we don’t work on Sundays."

Participants say there are several Carpenters for Christ crews in Alabama and Texas, with a few others located elsewhere. Tidwell said his team, headquartered in Attalla, Ala., has about 125 participants and takes about 80 to 100 people on each trip.

Carpenters for Christ teams work only on Southern Baptist churches; participants said other congregations have similar projects. Churches with construction projects place their names on the Southern Baptist Web site, the North American Mission Board, and the seven-man council of Tidwell’s crew selects a church.

Tidwell said his team’s organizers were originally planning to work on a church in Macon but that "the church’s timetable to build was different than what we could do." Then they saw the request for help from the Grandview Church, not far from their original destination.

The workers built a second building connected to the church, to serve as a fellowship hall, restrooms, a kitchen and six Sunday school classrooms.

Church building coordinator Lee Hudson said some of Grandview’s 200-person congregation have come out to watch Carpenters for Christ in action. A few have been so impressed with the group that they plan to join next year’s mission.

"We do that - pick up a few people every place we go," said Tidwell, who works for Goodyear Tire during the rest of the year. "It’s a self-perpetuating thing."

Each worker pays $100 to take part in the project, money that goes for food and supplies. The church is renting Centralia High School down the road for rooms, and church members are doing the men’s laundry. Some members of the church also helped with tasks for which the carpenters had no specialists, such as plumbing, said pastor Jim Smith.

"This is the only thing where you pay $100 to work hard on vacation," joked Bill McNair, a retired piano tuner from Florida.

Tidwell said the idea of Carpenters for Christ grew out of volunteer disaster response teams in the late 1970s, when men who helped Southerners rebuild after tornadoes realized they could keep on doing good works. He said that while "there’s not 10 of these men" that work in construction during the rest of the year, "I’ll put their work up against any contractor."

"A lot of the men who do this are not always inspired by church services or speeches, but this is something they can do."
Posted by Brian Kaller at 22:59