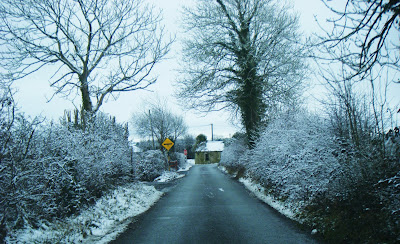 It's snowing again. If you are living in Minnesota, as I once did, this will not be astonishing, but we are in Ireland, where it hardly ever snows -- maybe a light dusting once or twice a January, but no more. But this year we have seen some of the strangest six months this island has ever seen -- record floods in late autumn, the first White Christmas and New Year's in most people's memory, and several more heavy snows through the winter.

And it's almost April. Lord knows when we'll get that garden started.
Posted by Brian Kaller at 07:41

I didnt know it snowed in Ireland?! Thats kinda cool, we always see the hills of green and Castles on the Tellie.

It doesn't usually, but this is a strange winter.

I can imagine, We have had a strange one here as well. Florida got in the Mid 20s to 30s and about destroyed the citrus crop and strawberries. Now what strawberries have made it, have all ripened at the same time so the farmers are in the whole profit wise. Not to mention the massive sink holes that happened due to so much water consumption in their attempts to save the Berries.

What We Need said...

It is beautiful though! We had a very strange winter here in North Florida as well - near record cold temperatures and a record for consecutive days of freezing weather. Beautiful now, though, and we are planting!