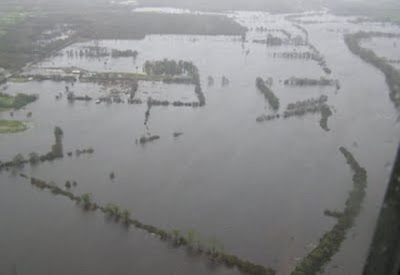 A Republican friend of mine sent me a Youtube link a while ago – one that I can’t find at the moment, but that has been making the rounds in conservative circles. In it, a climate denier makes an impassioned speech against an unnamed upcoming treaty, which he said would force the USA to submit to a one-world government, signalling the end of America as a sovereign nation.

My friend, a good and intelligent man who was sceptical of these claims, wanted to hear my take on it. Here is what I wrote back:

He seems to be referring to the Copenhagen Conference on Climate Change, which starts Dec. 7. This is a big deal, because it could be the first treaty that really makes an impact on the worsening crisis.

First, a little bit about the climate situation. People have known for a hundred years that carbon dioxide from our civilization would cause carbon dioxide levels to rise and the Earth would get hotter. Arrhenius first predicted this in the late 19th century, and I have on my shelf a childhood science book, "The World We Live In," from 1955, which states that CO2 from cars and factories would make the Earth hotter in the 21st century. It was not considered a controversial statement.

In the last several years, though, three things have changed: first, scientific findings have begun predicting much worse changes ahead because of "feedback loops" -- for example, that scientists discovered that melting permafrost in Siberia would release massive amounts of greenhouse gas. Second, recent events have made scientists think they underestimated the speed of the change -- for example, the so-called Larsen B part of the West Antarctic ice sheet was not supposed to disappear for 100 years, and it took 30 days in 2002 to fall apart. Third, this has broken into public consciousness as a major issue.

Up until now, many people have criticised the USA as being not only one of the major contributors to climate change, but the big foot-dragger in signing treaties to control it. Now, with climate experts getting seriously worried, climate activism at an all-time high, and a new president ostensibly sympathetic to a climate treaty, many people are excited about what could be accomplished at Copenhagen.

As for the charges that this could infringe on US freedom -- well, I've skimmed over the treaty, and I'm not too worried. Here is a copy of it:
http://assets.wwf.ca/downloads/wwf_proposal_copenhagen_climatetreaty.pdf

It’s hypothetically possible, but that would be true of any international treaty, and it never works that way. There are few specifics in the treaty, and what there is doesn't seem enforceable. The US government has generally gone its own way, even against world opinion, and as the US government has more military than the rest of the world combined, it would be difficult for anyone to force it to do anything it doesn't want to do. Most climatologists are more concerned that any Copenhagen agreement will be toothless and have no effect. Likewise, I would be more worried about things like the Patriot Act -- the US government having too much power, not too little.

Finally, if the US were obliged to cut back on climate emissions, or to give more aid to the poorest nations where hundreds of millions of people are starving -- well, those would be good outcomes. It wouldn’t mean that the USA need become a poorer nation -- European countries get by polluting half as much as America per person, and they are not necessarily less prosperous.

Photo: Clonlara in County Clare, underwater as Ireland suffers the worst floods, we are told, in 800 years. Photo: Insideireland.ie
Posted by Brian Kaller at 17:31