And the waters prevailed 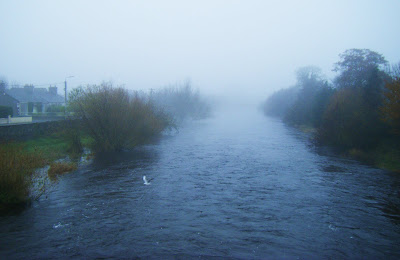 I might be repeating myself with so many water images, but that's what we're getting right now. Rivers that ordinarily creep gently under towns are now crawling the high stone walls that bind them. This is another photo of the River Liffey running through a nearby town, and you see how far the river has climbed up the trees.

Last week the floods were still something on the news, from the West Country and from England. Now some people have been evacuated in our own village, and we called friends of ours in the next village over to see if they are okay.

In one town, the river demolished a 300-year-old bridge, the only connection between the town's two sides. Rescue crews had to thread an emergency pipe across where the bridge used to be -- ironically a water pipe, so the villagers on the other side can drink safely.

I remember well living in Missouri during the Flood of '93, when hundreds of people worked to build a wall of sandbags between the river and Jefferson City. I remember driving with a friend through wooded country and having to stop the car suddenly when the trees ended -- there was water almost to the horizon, with telephone poles and electrical towers poking through here and there. I visited my old state in 2008, when highways across the floodplain were closed, covered either by the second 500-year flood in 15 years or by animals driven out of their habitat by the waters.

This is said to be Ireland's worst flood in 800 years, and while the country is much smaller in scale, this might be proportionately greater than those Midwest floods were.

In Missouri the river settlements and levees may only have been a few decades old, and people could chalk up a flood like that of '93 to the chaotic river's cycle. Here, though, towns date to the Middle Ages, if not to Roman or Celtic times, and the walls lining the rivers were set at their heights long ago and for a reason.

I don't mean that this is a 2012-style deluge. Too many people, when writing about climate change, peak oil or other aspects of the Long Emergency, reflexively invoking Hollywood versions of the apocalypse.

The reality might look more like what we are seeing -- a few houses flooded that were never before. Towns slowly retreating from some rivers and most seashores. Christmas season a bit "worse" and more traditional than they used to be. I would venture that the Long Emergency might take lifetimes, long stretches of normal life punctuated by moments of crisis.

Perhaps next week the 800-year flood will recede, and people will return to their homes. And we will forget, and dream that we are in control.
Posted by Brian Kaller at 22:37

"And down the river's dim expanse,
Like some old seer in a trance,
With a glassy countenance,
You looked upon the Long Emergency..."

In the stormy eastwind straining,
The pale-yellow woods were waning,
The broad stream in his banks complaining,
Heavily the low sky raining
Over our tower'd cities ...

Interesting article. I haven't been to Ireland, but isn't there a deficit of trees? They play a vital role in flood prevention, by slowing run-off, increasing infiltration, and drawing up the water.

In Australia, farmers have cleared much of land for annual crops and grazing. When heavy rain comes there's more run-off, which increases the severity of floods and reduces the moisture held in the soil to carry it over dry periods. In permaculture we use earth works such as swales and key line ploughing to reduce run-off and increase infiltration.

While some rain events will be overwhelming, they need not be so damaging. Many floods may be a symptom of poor landscape management. We should set about rectifying this situation while the fossil fuels available to achieve it are still available.

Trees are the great moderators of our climate, and by reforesting we would also sequester the carbon that warms the atmosphere.

Absolutely. Ireland was a cold rainforest not long ago, and their clearing may have contributed to the famines that followed, but I don't know what role that plays in the flooding.

We live near one of the last patches of old forest, and I hope we can restore some of them in the future.

The atmosphere is trapping more heat which then holds more rain;severity of floods are caused by a changing climate.