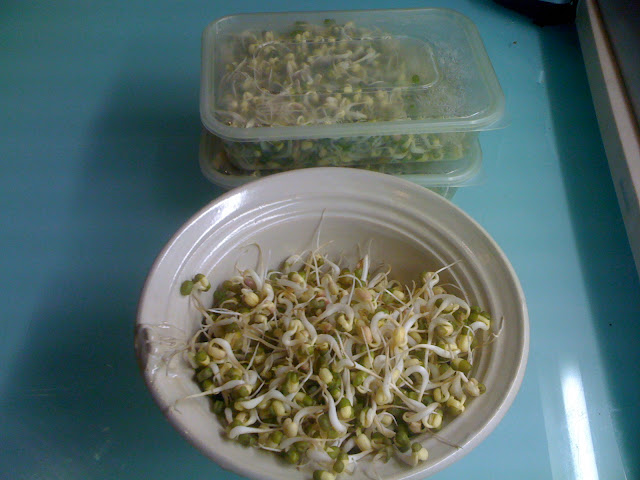 This article will appear in the Kildare Nationalist in County Kildare, Ireland next week.


Supporting yourself generally requires land, tools, weeding, composting, practice, and finally the months of waiting for things to finish growing. There is one kind of food, however, that can be grown by anyone, indoors, in any time of year, in a few days – sprouts.

I don’t mean Brussels Sprouts – nutritious as they are -- which are the buds of a certain type of cabbage. I mean seeds or beans – mung beans, broccoli seeds, radish seeds, alfalfa seeds -- that have been soaked and kept moist for a few days and have begun to turn into green shoots, as they would in soil.

The Chinese have sprouted for at least 5,000 years, and many Westerners have found growing sprouts an easy source of nutrition in lean times. Captain Cook used sprouting as a source of Vitamin C to avoid scurvy on long ocean voyages, as did soldiers in World War I and Indians during the famine of the 1930s. Sprouts are also high in protein – seven cups have an average person’s daily recommended allowance.

You can sprout the beans or seeds of most edible plants – the only common ones to avoid altogether are nightshade plants like tomatoes or potatoes, whose sprouts are as poisonous as the leaves of the grown plants. Mung beans -- for sale in most health-food stores for a euro or two a bag -- are a common and easy way to begin. School-children are often told to let them lie on a wet paper towel, but I get fine results just from letting them sit in a bowl-sized plastic tub or (unsealed) Ziploc bag.

Rinse the beans first, and then let them sit in a tub of water for about six hours or so. Then drain the water and let the beans sit in the damp tub for the next few days, rinsing them every eight hours or so -- the beans need to be kept moist but not swimming in standing water. Every morning before work, every day when you come home, and every night before bed, fill the tub with water again and then let it drain out.

Take care that the damp seeds do not grow mouldy – I found this to be a hazard with broccoli and alfalfa seeds, but never with beans. In three days or so the beans should have sprouted into white-and-green shoots, at their height of nutritional value. Sprouts can be eaten in salads – I include a couple of recipes below -- and many people eat broccoli, alfalfa or radish sprouts on sandwiches instead of lettuce. Soybean sprouts, popular in Chinese cooking, are the only ones that are better cooked.

Personally, I found that the smaller sprouting seeds, like alfalfa, gave me too little finished sprouts to make them worth my while, and had far too great a risk of mould. The larger beans, like lima or adzuki, tended to sprout more slowly and can often go bad before fully sprouting. Mung beans, on the other hand, tend to work perfectly.

As mung beans cost very little and keep for years, you can get all your protein and many of your vitamins for only a couple of euros a week. You might love them, you might not, but you should have them handy for emergencies.

You can make a sprout salad in a couple of different ways. My favourite is to mix 50g of yogurt, 10g of Sriracha or other hot sauce, 5 ml of lemon juice, 5g of powdered vegetable stock and pinches of turmeric, cayenne and pepper. Mix all these together into a sauce and add 20 grams of finely chopped scallions. Finally, wash, drain and dry 300g of mung bean sprouts, and slowly mix it in with the sauce.

Alternately, you can mix 30g of olive oil, 10g of cider vinegar or lemon juice and mix them well. Add 10 ml of dark soy sauce and add a pinch of salt -- I put in a bit of wasabi for a spicy kick, or you can leave it out. Coarsely grate 100g of peeled carrots, 50g of apples and 20g of chopped scallions, and mix them into the sauce. Finally, wash, drain and dry 300 grams of mung bean sprouts, and mix them in as well.
Posted by Brian Kaller at 19:27