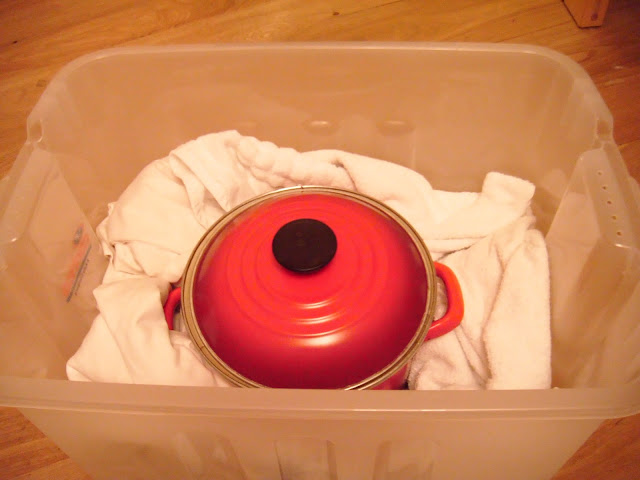 Whether you grew up in Texas or Tasmania, Manitoba or Macedonia, you were probably raised in a modernised Western culture like me, with electricity and motorcars and other modern infrastructure. If so, you probably grew up blithely spending massive quantities of energy to do the simplest of tasks.

Instead of boiling water by lighting a fire and putting a kettle on the stove, for example, we might blow up the oldest mountains in the world to mine the remains of forests older than dinosaurs, set those old forests on fire to boil water, and then use the steam to turn turbines to send electricity through miles of cable to an outlet on your wall to power a kettle to boil water. The details might change depending on where you are, but most of us live this way – and so does my family, to an extent. It’s not easy to live any other way these days; one must deliberately and daily choose, on abstract grounds, a life of greater inconvenience, and slowly learn an older set of skills.

We do this, of course, because we have so much energy at our disposal – the equivalent of 300 slaves by one common estimate, making each of us richer than medieval kings. Of course, we can’t keep doing this forever – there were only so many ancient forests to burn, and doing so has played with the knobs and dials of the world’s weather control panel. Thus, most discussions of the future focus on producing enough energy to meet our escalating needs -- escalating because each generation grows up with more comfort and convenience, and because there are more of us.

The same is true in our personal lives; most of us fantasize about making more money, not about spending less, even though it amounts to the same thing, and even though your current spending might not be making you happy. Adverts and articles tout new and more fuel-efficient cars, not buying fewer or older cars and driving them more slowly.  A major magazine a few years back showed their concern for the future with an “eco-issue;” I showed mine by refusing to buy the magazine. Most discussions of energy, similarly, ignores the central and necessary factor of making do with less, often by reviving now-forgotten skills.

Take, for example, the old technique of hay-box cooking, done by people here a few generations ago and by the British during the lean times of the Second World War. A hay box is just what it says, a box lined with hay or some other insulating material that will keep heated food hot and cooking for hours. Manufactured hay-boxes were built in the early part of the 20th century, and stores used to sell elegant and decorated models, but to make one at home all you need is a box – or in my case, two smaller boxes, one flipped upside-down and placed over the other – with blankets stuffed around the sides.

To use this method I started by making a few litres of lentil soup with vegetables from our garden, and brought it to a rolling boil. On the stove I would have to cook it for an hour or more until the lentils were soft, but here I only needed to bring it to the boil, take the pot off the stove and place it in the hay-box. I surrounded the pot with blankets in lieu of dry hay – people here make hay while the sun shines, so there hasn’t been much in Ireland this year – covered it over with more blankets, and went to bed. In the morning I took the cool pot of soup out of the box and found it had cooked perfectly, after using a fraction of the fuel.

Another example of using what you have comes in an even more unassuming package, the tea cozie. The Irish are among the most prolific tea-drinkers on Earth, and a “cuppa” is the standard greeting offered to family, friends and just passers-by. Boiling tea cools quickly, and if you like your tea strong – sitting in the pot a while – or want a second cup, you want to conserve the heat. The tea-cozie solves that by insulating the pot like the hay-box insulates tomorrow’s dinner, keeping it hot longer. A thermos does the same thing for a drink on the go.

The same logic applies to our houses; most of us in the modern world live in homes far larger than we need, and if many people heat their entire homes in winter while wearing summer clothes indoors.  BBC science advisor David MacKay, in his book “Without Hot Air,” writes that British homes in 1970 had an average temperature of 13 degrees in winter – 55 degrees Fahrenheit – and I’m betting that in poorer and more traditional Ireland it was colder still. Yet people got by; they were more psychologically accustomed to colder temperatures, , they gathered in rooms together and allowed their body heat to raise the temperature, they remained physically active, they wore heavy clothes indoors, and they heated certain central rooms and let unused rooms provide insulation

As Kris De Decker notes in Low-Tech Magazine, “the reduction in energy use for space heating thanks to more efficient homes was less than 20 per cent from 1993 to 2005. Lowering the thermostat by 2° C (or 4°F) would thus result in energy reduction comparable to that. Turning down the thermostat from 22° to 18° C would initiate an energy savings of at least 35 per cent.”
DeDecker notes that insulating the body itself is the most efficient option, as there is so much less space to cover. Using American “clo” units, where one clo equals the thermal insulation required to keep one person comfortable at 21 degrees centigrade, he notes that briefs provide 0.05 clo, light socks 0.10 clo, a heavy shirt with long sleeves .25 clo, a sweater .30 clo, and long pants .30.

Someone wearing the ensemble described above would feel comfortable in a home heated to 21 degrees Centigrade – the level assumed for the modern USA by the standards company ASHRAE -- but in just a t-shirt would need 24 degrees. With long underwear they would only need the house to be heated to 17 degrees to feel the same comfort, and since lowering the thermostat just 1 degree C yields an energy savings of nine to ten per cent, such a change saves 50 to 70 per cent on heating costs compared to the t-shirt.

All of these are things we could change quickly in theory, but realistically, they will take time to grow used to – I hail from a hotter climate and am used to blasts of central heating in winter, and shifting away from that was slow and sometimes uncomfortable. In this, as in so many other areas, though, it helps to take the first steps in a different direction and keep going, and then one day you look behind you and realise how far you’ve traveled.

That "hay-box" cooking style was my mother's way of cooking milk rice without needing to stir it constantly for half an hour so the milk doesn't stick to the ground and burn. (With cinnamon-sugar and mashed apples or canned cherries / plums it's a childhood staple here around Berlin, to the point that even my university cafeteria in the late 2000s had it on the menu every friday to please the students' and staff's nostalgia.) Except in our case, it just meant "putting the pot to bed" for an hour or two, i.e. between the down duvet and the matress.
Though we haven't really done that in 2 decades, partly because my mother decided to lower the enormous calory level of the dish, but mainly we gradually discovered that we actually get lactose-intolerance-like digestive problems from whole-fat milk. (I couldn't safely eat the cafeteria version either, because they did it the traditional way with extra cream.) So now we just cook normal parboiled rice in water (or use leftover rice from yesterday's dinner), and then quickly heat it up with half-fat milk in the microwave for a minute. Not nearly as good as the traditional sticky rice cooked in milk until it's basically half-liquid pudding, but at least it's a lot quicker on the table, and there's no chance of burning the milk. Or, more often, we use wheat semolina instead of the rice, which only needs to be brought to boil in the milk shortly, much like the starch in pudding powder.


I might try your suggestion for legume-based stews, though. And in theory, that should work for your basic potato-and-leak or carrot stew, as well - but I suppose there is a danger of cooking the fresh vegetables to a mush.
There are other old tricks to shortening the cooking time of dried legumes. I don't think we ever did it for lentils (they cook as quickly as rice, in my experience - maybe it's a matter of lentil size or variety?), but with yellow peas and dry beans, we soak them overnight in the pot (no salt, no heating), after which they have more or less rehydrated, which shortens cooking time a lot.

P.S. We use something similar to your "hay box" (a large styrofoam shipping box I salvaged from my university lab's trash; and a tinfoil-covered carton box we once got from an over-zealously packaging grocery online retailer, lined with some old bubblewrap and covered with another, somewhat larger carton to create an air pocket) to store vegetables and bread outside in the winter for a few weeks. It keeps out at least the mild night frost (0 to -3°C) we usually get until January (and this year, apparently for the rest of the winter as well), so over the holidays the temperature in the box is similar as in the fridge or in a root cellar, if not quite so stable. In the unheated, concrete-walled garage (-5°C at worst, even when it gets to -20°C outside), the styrofoam box has sucessfully kept potatoes from going sweet (frost damage) or germinating for months on end, in years past. With your milder winters in Ireland / Britain, the method should be good enough to store traditional root cellar vegetables outside all through the winter. You might even use a real hay box, if you can put it somewhere dry. (I wouldn't recommend using textiles for insulation, unless you have some old sweaters made entirely from artificial fibers like polyester. Natural fibers would absorb air moisture and get moldy.)

I never had milk rice -- it sounds like a rice pudding -- and I hadn't thought to make it with a hay box, but I don't see why not. I'd like to try it sometime.

I have done things like what you describe with the Styrofoam, though, by burying root vegetables in a box of sand. People here used to do it by laying straw down, piling potatoes on the straw, covering that pile with more straw and finally piling earth around it. It keeps them at a constant temperature, although it might not work for all winters.