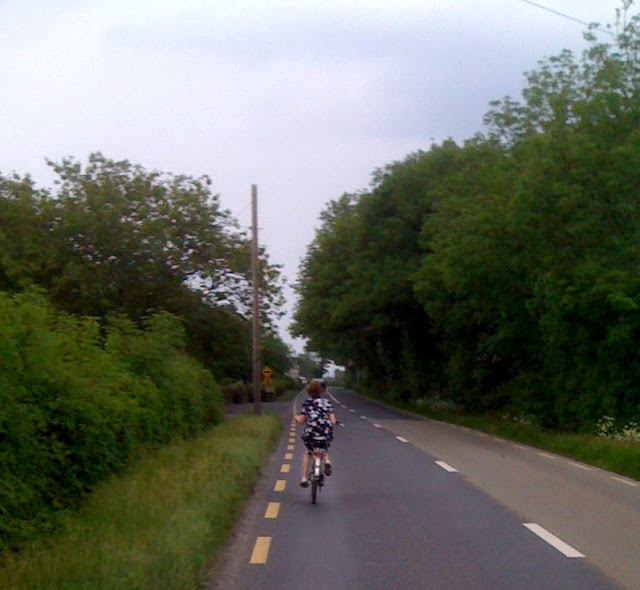 Things were very scarce, and money tight. When I was older I met this boy in Sallins, and he used to play in a band, and I often used to go with him, and eventually we were married.

I remember as a young mother of two in ’47, it was a terrible winter. 1933 had been a terrible winter and the snow never melted, and no one talks about that, but 1947 was the worst. The roads were very bad – first it snowed, and then after a while the snow melted and it froze, and it was after the war so there was no coal, and the turf men couldn’t get through with the carts. We used to have rows upon rows of pony carts full of turf, but this time the ponies weren’t able to walk on the ice. I remember putting the kids to bed so they would stay warm. There was no central heating then.

When the turf men did get to Sallins, they charged a penny a sod. The reason they did that is that they had to go slowly – they had to stop and put a bit of hay on the ground in front of the horse, or the horse would be slipping and sliding. It was desperate mean, we thought, but there was a reason for it.

When the coal did open up again, one of our neighbours in Sallins said to the turf men got a letter from “I’m five-and-a-half years waiting to tell you that I don’t want any more turf -- you can stick it where the sun don’t shine. You’ll have your sons at Clongowes on our misery with all the money we’ve paid you.” And to think about it, he really was wrong, for those men had terrible work – they had to cut it, and foot it, and dry it, and drag it home, and then drag it to us. So I was sorry for the men.

Me: Did anyone cut their own turf?

Patty: Not around my place, but around the bog some people did have what’s called a turf bag. My husband’s sister married a man called Holt, and he used to cut his own turf. And sometimes you’d get this lovely black turf in wartime, cut with a wing-slane. The breast-slane cut the top of the bog, the soft, spongy stuff, which wasn’t as good.

The day the coal came back, somebody was in Naas and got a package with the coal, and a woman opened the package and held up oranges in her hand, saying “The oranges are back!” and a there was a young lad who came in to us, he grabbed it, and she said “Let me peel it for you,” and he shouted “No, I want to play with it!” He had never seen an orange, and thought it was a coloured ball.

When I got married during the war we were all given a half ounce of tea each, 12 ounces of butter and three-quarters of a pound of sugar. Everything was very hard to get. So they made up this rhyme,

“God bless De Valera and Sean McAtee,
They gave us brown bread and a half ounce of tea.
Bless them all! Bless them all!
So we’re waving good-bye to them all!
When Hitler comes over
He’ll give them turn over
So cheer up he has blessed them all!”

I can remember people singing that.

Me: Was it serious or sarcastic?

Patty: It was a parody of “The Sergeant-Major’s Sores,” a war song sung to the same tune.

Me: So did you have books in the house?

Patty: Oh yes, I was a bookworm, fond of reading. I married quite early, and in three or four months became pregnant, and I was at home by myself – my husband was away often with the band, and there wasn’t much company around. So I read, read, read all the time. I was sorry later that I didn’t take my leaving cert. I would have liked to work in a shop, but you had to pay a big fee.

A factory started in Celbridge in the Old Mill, called Irish Gowns, paying ten shillings a week -- and everybody thought that was grand, and I told them don’t do it, as it wouldn’t keep tires on your bike. My grandmother was all her life a big believer in the aristocracy, in working for the proper people, and not in being a barmaid or working for someone who wasn’t as good as yourself, or going out to a farm and being a drudge.

So she got me trained to be a silver service para-maid with Miss Fowler, and they had swanky friends who worked at Howth Castle, and they got me a job working there, and they made a person out of me. When I was working at Howth Castle, I trained under an English butler and an Indian valet – very strict. That experience stayed with me, and I still demand attention to detail – the people say “Oh, she’s particular.”

Photo: My neighbour riding her bicycle home from Mass.
Posted by Brian Kaller at 21:50