How to make pickled apples 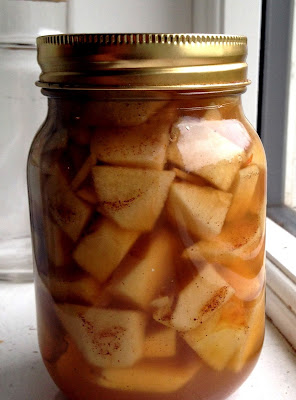 Almost every food-stuff, whether foraged, hunted or harvested, remains fresh for a brief time and then becomes inedible unless preserved. Since humans need to eat all year round, however, the survival of thousands of pre-refrigerator generations depended on how well they could preserve food – by making it too dry for microscopic critters (grains, spices, herbs), too acid (vinegar pickles), too alkaline (limewater eggs), too salty (sauerkraut, bacon) or sweet (jams and syrups).

Even in our refrigerated-and-microwaved era, most of the foods we eat – cheese, pickles, jams, butters, yogurt, salami and many more – were originally ways to keep food during the lean months. Unfortunately, these bits of food culture, carried over from a more self-sufficient age, don’t convey the amazing breadth of foods that could be preserved -- most modern people know peanut butter, blueberry jam and dried parsley, for example, but not walnut butter, dandelion jam or dried nettles.

Pickles make perhaps the best example. Most of us grew up with pickled cucumbers, and possibly with beets or onions – but in other eras or parts of the world, humans pickled a much greater variety of foods, including mushrooms, meats, and fruits. Some cookbooks from the 1800s carried recipes for pickling apples, and old radio programs from the Depression promoted it as a cheap and delicious way to get vitamins all year.

We have several apple trees here, and I’ve been experimenting for the last few years on adapting a variety of old recipes, and let me tell you, the results are my new favorite food ever. This recipe of mine will have a particularly strong flavor, and the apples will be best used as a garnish – or you can tone down the recipe to your taste.

1. First, take the cider vinegar - I also used some of the parsnip vinegar I made, from the wine that didn’t work out. Mix in the water and lemon juice.

2. Stir in the sugar and salt, along with the peppercorns, cloves, star anise, cardamom and chili.

3. Heat it on a stove until it is simmering.

4. Peel the apples – you can use the peels again for making jam.

5. Take the remaining flesh, core it and dice it into cubes about half an inch across.

6. Slice the ginger thinly, as with a mandolin.

7. Drop the diced apples in, with layers of ginger between them, and stuff them in almost to the top.

8. Pour the now-boiling vinegar solution over the apples and ginger slowly, so as not to spill any, and
fill it to the top.

9. Seal the Kilner jar. At this point you could set them in a hot bath to be on the safe side, but my canning jars just snapped shut on their own. Also, too much heat might turn the apples to mush, whereas this way they stay crisp.

The longer you leave it, the stronger the flavor – and the result is a tart, sweet, spicy, intense flavor that goes great with savory dishes like beef or mushrooms. I have left mine for seven months, and they kept just fine.
Posted by Brian Kaller at 00:04