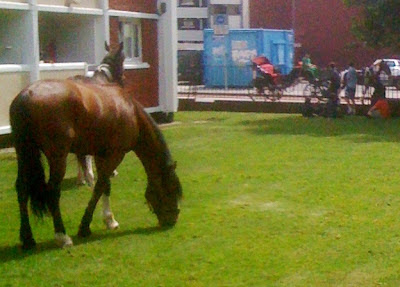 Every day I walk through Dublin, from the Quays on the River Liffey where the bus drops me off to my office near the Guinness Brewery, and every day I pass rows of horses. These days almost everyone gets around by car, bus or the Luas light rail, of course, and the horses are mainly for tourists.

Even into the 1980s or 90s, however, they regularly pulled milk, coal and rubbish carts around the city. Even now they are a normal part of the daily scene, and when I walk down an alley on my lunch break, I often pass a horse or two that’s been tied up and given a bag of oats.

When I hear people casually discuss a future in the Long Emergency, they often swing between two possibilities, assumed to be mutually exclusive – either a dystopian urban existence, surrounded by an aging moonscape of concrete, or a pastoral life of agrarian subsistence. Occasionally someone mentions gardening in the city, but rarely does anyone bring up animals.

Livestock can do surprisingly well in the city, given the right circumstances. Some areas of a city, inevitably, have nothing but asphalt, but most areas have yards, parks, roadsides, greens, and other plants for grazers to eat. One reason Dublin has so much green space, I’m told, is that so much land was put aside for family cows. When horses pulled carts along the city streets here, they grazed yard after yard while the human made their deliveries.

One window in our building looked onto a block of flats – an apartment complex to Americans – surrounded by the usual blank lawn of grass. In some places I they might hire someone to mow the grass, using precious fuel or electricity and creating waste that many people would dump into the rubbish system. Here, they just let the horses graze there, and neatly allow two problems to become one solution.

Nor are all livestock as massive as cows or horses. My mother-in-law grew up in the post-war ruins of Frankfurt, Germany, and her family kept a goat for milk. They didn’t have much room, but the children took the goat for a walk every night like a dog, and it kept the weeds down along the road. 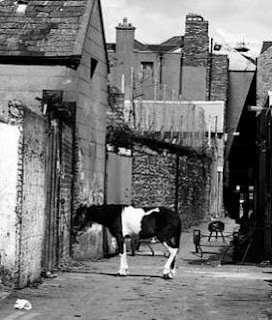 In London during World War II, neighbours living under rationing pooled their resources to keep pigs in a communal pen, and paid neighbourhood boys to mind them. The pigs eliminated much of the rubbish problem, and supplemented Londoners’ diet with protein. Chickens, ducks and rabbits could live on roofs or balconies, as well as in most urban yards.

Think of it this way: we think it completely normal to keep small predators like dogs and cats, who compete with us for food, but think it bizarre to keep sheep or goats that can eat the biomass we cannot.

Top photo: Horses outside my window in Dublin.
Bottom photo: Horse in a Dublin alley, perhaps in the 1960s. Courtesy of Irishhistorylinks.com
Posted by Brian Kaller at 23:56