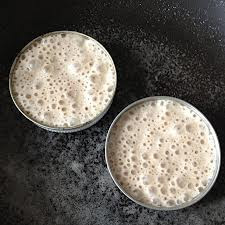 Making food – gardening, preserving, cooking – is generally time-consuming work, and very few foods leap out of the air and volunteer to make themselves. Fortunately, sourdough does just that, cultivating the natural yeast from its surroundings rather than using the dried yeast powder from the store.


First take a tablespoon (about 10 millilitres) of flour and a tablespoon of milk and mix them together – exact quantities aren’t that important. Then you leave it sit out – say, on your kitchen shelf – and stir it every morning and evening for about a week.

When this gooey, pale mix begins to bubble and smell sour and tangy, it has become sourdough starter. If it smells pongy, it pulled the wrong kind of bacteria out of the air, and needs to be thrown out -- there’s really no way to ensure either result or predict ahead of time.

We added a roughly-crushed organic grape to the mix and took it out later. The grape’s sugar is food for the yeast, and grapes are often covered in yeast themselves – that is the powdery coating you see on the surface of grapes, one reason ancient people so easily discovered they could make the juice into wine.

Once you have a good batch of starter going, you keep feeding it a little bit every day. Keep it at room temperature – say, 20-25 degrees -- and take out a portion every week or so to make the bread. Some people keep their starter in their refrigerator, where it ferments more slowly and only needs to be fed once a week.

To make the bread itself, you bake it as you would bread in general, except that instead of a packet of yeast you use some of the starter – don’t use it all, of course. A friend of mine uses about half a cup of starter to about 800 ml lukewarm water, and then adds as much flour as is needed to make a soft dough – about two pounds. She uses about 20 per cent rye flour to about 80 per cent wheat. You need to let the dough rise longer than you would for conventional bread – sometimes several hours.

These figures and this recipe are meant to be approximations; people have different tastes, different kinds of bacteria and yeast in their homes, different room temperatures, and different luck. Some bread-makers advise novices to get someone else’s sourdough starter first, in order to see what one should taste and smell like. Some “proof” the starter before making bread dough; that is, mixing it with three parts flour to two parts starter, letting it rise about an hour, and then mixing in the rest of the dough.

One friend of mine made a great sourdough starter on her first try, kept it by the kitchen window in a plastic bowl, and made bread every few days. That might work for you, or you might have to adjust the recipe over several tries until you find something that does.

Thank you, Brian! I've been wondering how to make starter from scratch for ages.