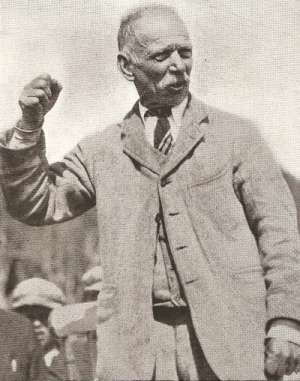 I interviewed an elderly couple some months ago, and they described they way they and their neighbours passed the long evenings.

"... people would visit each other’s houses and have dances, and do the reels and the Irish dancing. and the women would drink tea and the men would drink porter. And they would have a seanchai – a storyteller – and he’d be spinning great yarns and tales, some of them the old, old stories.

Some of them might be two thousand years old, really stories from prehistory -- stories of Kilcullen and Meave, stories from long long ago. Seanchas is the Irish word for old, so a seanchai (shawn-a-kee, they pronounced it) was telling the old stories.

[We had a] turf fire, very warm, and the people gathered around listening to the seanchai telling his story. A lot of ghost stories, as the Irish are really into ghost stories. And the children were supposed to go to bed but were allowed to stay up, and would listen to the seanchai, their eyes wide like saucers."

Photo: a storyteller on fair day. Courtesy  of Irishhistorylinks.com.

My grandmother and her sisters kept diaries of their doings, especially in the 1920's an 30's before they had families of their own. The thing that always struck me was how much visiting they did -- back when the roads and scattered population made visiting a major undertaking. Even 50 years later my grandmother could recall poems and recitations from those days. I walk around a US neighborhood now and it is just windows flickering with television light . . .

Oh dear, I hope somebody's recorded those stories; it would be tragic if they were lost.

I miss terribly that element about Columbia, btw: how we were forever visiting one another & you rarely had to spend an evening home alone if you didn't want to. It wasn't so much storytelling as just meandering conversation and cracking each other up, but they are golden days in my memory and I would give anything to have that back in my life.

Like lots of other things we lost during the "boom" storytelling is making a comeback. I was at a storytelling night last night in Cavan County Museum.

Another thing that was really big in rural Ireland when my mother was young in the 1930s, 40s and 50s was amateur dramatics and this is suddenly making a comeback.