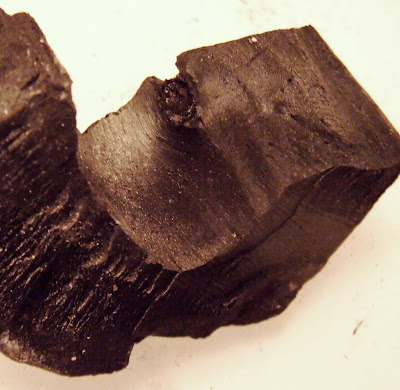 Growing up I knew charcoal as the square briquettes people bought in bags and poured into the barbecue grill once a summer. Like everything else in our lives it came from a store, chemically treated and wrapped in plastic, with no sense that it could be made naturally at home.

Charcoal is simply wood that has been burned with little oxygen, either by being heated but sealed away from oxygen or, more commonly, setting it on fire and then cutting it off from the air, keeping the wood from burning completely into ash. Most other substances in the wood are driven off, leaving a porous shape of almost pure carbon, lightweight and easy to transport.

It can purify water by soaking up impurities, as in many kitchen sink filters, and treat poison victims when crushed and drunk in a fluid. It can be added to soap for abrasion, crushed to make ink or paint or mixed with minerals to make gunpowder. It allows people to burn fires hotter than wood, enabling people to melt quartz into glass or make iron malleable. It was charcoal that allowed Rennaissance craftsmen to grind glass into lenses, allowing elderly people to continue reading and writing, and doubling humans' intellectual lifetime. It was charcoal that allowed people to work iron into swords and ploughshares, buildings and infrastructure; other metals can be hammered by hand, but only with charcoal fires could the Bronze Age become the Iron Age.

Perhaps charcoal's most surprising use, one that gained a burst of attention in recent years, involves trapping carbon from the atmosphere. Vast regions of the Amazon have a distinctive and fertile soil called “black earth,” or terra preta, and recently archaeologists realised that this soil was not a naturally occurring phenomenon, but had been cultivated over millennia. What’s more, they began to realise that much of the sparsely inhabited Amazon rainforest was once densely populated with humans, continually enriching the soil as they farmed.

Like many primitive societies, they burned land to clear it for farming or hunting, but unlike many others they turned some of the wood into charcoal and then worked it back into the soil, creating an unusually rich and fertile ground; according to a 2006 article in Nature, bio-char – the charcoal folded into the earth to make terra preta -- is three times richer in nitrogen and phosphorous than ordinary soil and 20 times richer in carbon.

According to researcher Bruno Glaser at the University of Bayreuth, Germany, a hectare of meter-deep terra preta can hold 250 tonnes of carbon, as opposed to 100 tonnes of carbon in unimproved soils. In addition, the bio-char itself increases soil fertility, which allows farmers to grow more plants, which allows more bio-char to be added to the soil. Johannes Lehman, author of Amazonian Dark Earths, claims that combining bio-char and bio-fuels could draw down 9.5 billion tones per year, equal to all our current fossil fuel emissions.

Whether or not such people are correct, the technique has drawn admirers like climate scientists James Lovelock and Tim Flannery. As I mentioned last week, climate change is hitting people around the world, yet we struggle to reduce our pollution even a little, and our goal of a zero-carbon world seems ever more hopeless. If such techniques would work in more temperate climates -- that is, if the carbon trapped by charcoal far exceeds the carbon expended to grow it, and can be trapped on a human timescale -- then everyone in the world would possess the skills to become, not just carbon-neutral, but carbon-negative. 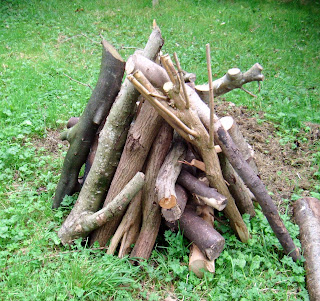 To  do any of these things, however, we first need to gain experience making charcoal at home. My daughter and I tried three ways of making charcoal, with varying degrees of success. Since charcoal can be created when wood is inside a heated and sealed container, I put two metal buckets together, one upside-down and atop the other, and inside I placed one or more pieces of wood. The crack of space between the two buckets I plastered with clay, and around them I started a fire of some of our rotting lumber. (Never burn treated lumber for charcoal or even in a fireplace; it has chemicals that can be poisonous when inhaled, and I would not want to drink water that has been filtered through its charcoal.)

I tried to make small amounts of charcoal, one at a time, but it never worked. If the clay plaster held, the logs inside were merely singed, and if part of the plaster fell off – as happened more frequently – the fire caught inside until I was left with only a few small pieces of charcoal and a lot of ash.

For the second method I took a page from County Waterford farmer and author John Seymour and dug a trench, lit a fire in it, tossed in some logs and covered it with corrugated iron sheeting. Then I packed the cracks tightly with clay and plants to seal in the oxygen, and uncovered it a few days later. This worked better, as I did get some charcoal out of it, but the amount was still tiny. 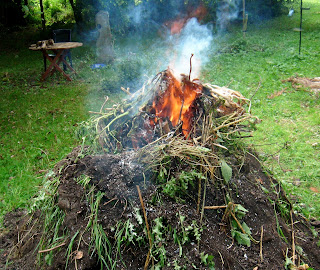 The best method, I found, was the one charcoal burners used from ancient times until just the last century. I stacked logs in a triangular pattern and leaned more upright pieces of wood around them, until I had a small and dense ring of wood about a metre high. Then I filled the interior of the triangle with tinder and kindling – sawdust, mulch, twigs, anything that would light easily and create an intense heat that would burn the rest of the wood.

Then I covered the wood with recently-cleared weeds, spread clay over the weeds, and shovelled earth over those, until I had a mound open at the very top, with a “chimney” that looked down into the tinder-filled space between the logs. 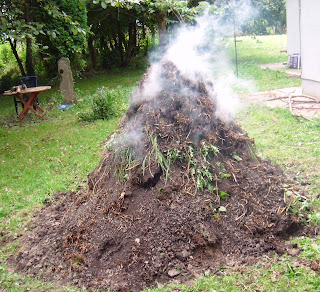 Next came the big moment – I lit a fire-starter and dropped it down the middle, and within moments had a raging fire inside the mound. I covered the top of the mound with strips of weeds and shovelled more earth on top – the weeds and roots served to block the entrance, so that I wasn’t simply shovelling loose earth into the hole and putting out the fire.

The result was a strangely smoking hill, and when it smoked too much when it cracked and too much oxygen got in. When a hole or crack formed, I plastered more mud and earth over that part – carefully, for the escaping steam can get quite hot – until the leak was stopped.

Two days later, I broke it open, and began fishing out the charcoal, and got about five kilos from an estimated 36 kilos of wood. Most text say the charcoal can be as much as 60 per cent of the wood by volume and 25 per cent by weight. I probably got less charcoal because I let it burn through the night; I had to spend part of the day building it and light it in the evening, as the constant threat of rain here meant I couldn’t leave it overnight. Charcoal-burners, though, were said to watch their mound for hours until the smoke turned from white to blue, indicating they were beginning to burn charcoal, before putting the fire out to maximise the amount of charcoal from a single burn.

With more careful measurements, amateur scientists around the world could try such techniques on some kind of fast-growing wood, like willow, and see if we could do with terra preta in temperate climates what Amazonian tribes did in the rainforest. On paper, it looks like it should work: willow can yield ten tonnes to the acre, the charcoal would retain a quarter of that mass of the wood, and should remain stable in the soil for decades while new tonnes are grown. All this, though, is theory, and we won’t know unless we experiment. 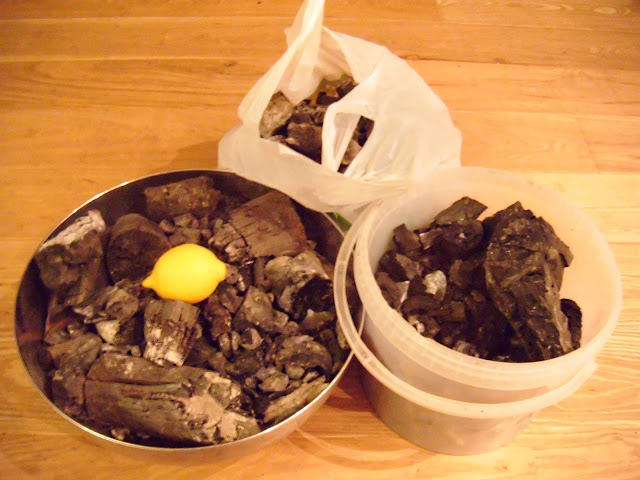 Whether terra preta turns out to help the climate or not, however, charcoal helped create everything in the modern world, from glass (eyeglasses, greenhouses, microscopes and telescopes) to steel (ploughshares, swords and most modern structures) to any number of other useful innovations. Whatever happens in the future, this is one skill we want to preserve.

Originally published in 2012.
Top photo: A piece of the charcoal we made.
Second photo: Our pile of wood.
Third photo: That same pile of wood covered in weeds and earth, with a fire lit down the chimney.
Fourth photo: The pile entirely covered in earth, with the fire still going inside.
Bottom photo: our inventory of charcoal, with a lemon for scale.