An Orchard From a Single Tree 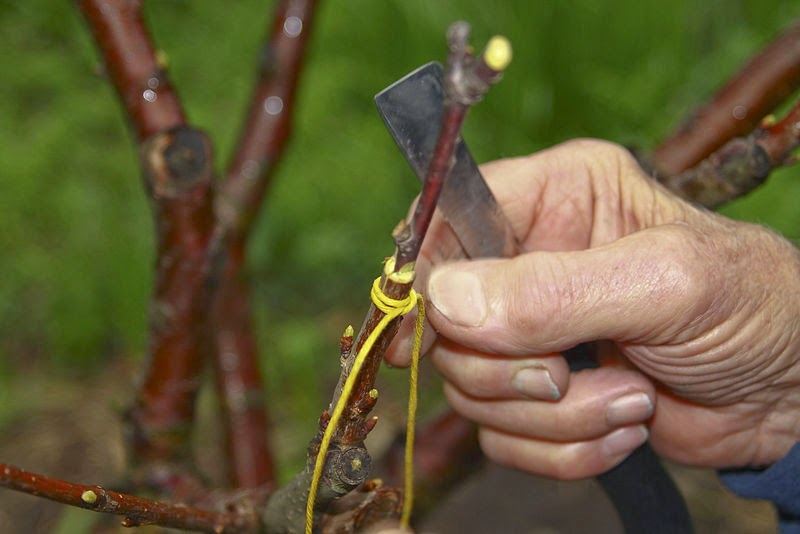 At some point in your childhood, I hope, you ate an apple and hit upon the idea of planting the seeds. Most such experiments stop at the paper-cup stage, but if your tree survived long enough to bear fruit, you probably noticed something strange: the seeds from that Golden Delicious apple do not necessarily grow into a Golden Delicious apple tree.

Seeds, you see, come from pollinated flowers. Flowers exist to get animals to combine a plant’s DNA with that of another plant, just as fruit exist to persuade animals to eat them and drop the seeds and fertiliser somewhere else. An apple’s fruit, obviously, is determined by what kind of apple tree it is, but the seeds inside are shaped by whatever pollen came to the flower.

If the bee that pollinated that Golden Delicious tree, way back when, had been to a crab-apple tree just before, then that Golden Delicious apple contains seeds that are part crab-apple. And since there are so many wild and domesticated apples around us, and bees need to make their appointed rounds, it’s quite difficult to grow purebred apples – and many other fruits – from seeds.

Even if you succeed in growing the fruit you want, it doesn’t necessarily come on the tree you want. You want a certain size of tree, suited for your climate and resistant to disease. With fruits you want a certain size, variety and flavour, and the two don’t often come in the same package.

Each plant variety has strengths and limitations that other varieties do not, just as a golden retriever dog has advantages and limitations that their wild wolf cousins do not. Of course, you can’t simply cut off a dog’s head and plant it onto the body of a wolf, getting a healthy but friendly Franken-dog. With trees, though, you can do exactly that.

It’s called grafting, and it dates back to ancient times, and today is practiced on a vast commercial scale; when you eat fruit, it was almost certainly from a grafted tree.

If you want to graft a tree the wrong way, do what I did the first time: let the knife slip the wrong way, cut your thumb almost in half, and spend a night in the emergency room. Grafting knives are quite sharp, so be careful.

To graft a tree the right way, however, you take a root and stem of one kind of tree for your “stock,” the base of your Franken-tree. You could use a hardy wild variety of crab-apple, or more commonly these days, one of many varieties bred just to be root-stock for grafts. The stock determines what the size and shape of the tree will be – if you use the bottom of a dwarf tree sapling as your stock, you will end up with a dwarf-sized tree.

Then you take a 1-year-old cutting, from the previous year’s growth, for your “scion” – again, a Golden Delicious scion if you want Golden Delicious fruit. The best scions are straight, long, upright shoots, usually taken from young and vigorous trees; in old trees this type of growth is hard to find and usually near the top.

The tree that grows from a successful graft will have the best of both worlds; for example, as the size and shape of your root-stock variety, but yielding the fruit from your scion variety.

Apples are the fruit most commonly grafted, but you can graft pears, plums, cherries or many other fruit. Amazingly, you can even interchange certain species – stone fruit like plums, cherries and peaches are interchangeable, and you could, in theory, attach them all to one “fruit cocktail” tree. The good people at Seed Savers, County Clare, Ireland, even grow pears from their hawthorn tree.

Nor do the possibilities stop at trees; I am told you can even graft the top of a tomato plant onto the bottom of a potato plant – they are both in the nightshade family – and get both vegetables from the same organism.

Nor are you limited to one scion; in theory, you can attach as many scions as your root-stock tree has branches. You can even attach multiple kinds of apple; one man in Britain has grown a single tree, planted 25 years ago, and attached 250 separate scions onto it, making it the only tree in the world to yield that many kinds of fruit.

It’s best to graft in winter or spring, when the trees are as dormant as possible – the people at Seed Savers say they cut scions in December, store them in sand in cool dry place, and graft them in February or March. To try grafting you need the following things:
To graft a branch, you have to cut the scion off the desirable-fruit tree, and cut a branch of similar diameter off the hardy stock tree. If you’re trying this for the first time, the best thing might be to use a sapling, 6 months to 1 year old, as the stock, and the scion can be grafted onto its stem and become its top half.

Make a very slanted, diagonal cut at the top end of the stock, so that a long strip of bark is exposed. Then, rotate the sapling to the other side and cut it in the other direction, making an upside-down V shape. Finally, take the scion and make a similar cut the other way, so that the two dove-tail together. There are many other cuts that could be used, but this is one of the simplest.

The idea here is to expose as much of the cambium – the green layer under the bark – as possible, and to lay the stock’s and scion’s cambium touching each other. That’s the living part of the tree, where healing takes place, and that’s the part that will grow back together. The experts I talked to also recommend cutting off the tip of the scion after grafting, anything more than three buds up, so the tree will concentrate its growth into the most viable section.

Fit the two as tightly and perfectly as you can, and then make sure they stay together. Some people take sticks of wood and lay them against the dove-tailed branches to keep them in place. In any case, wrap the entire thing together in bandages or grafting tape. What you’ve done, effectively, is make a splint for the tree to grow back just as broken bones would.

Finally, light the candle – you were wondering what that was for, didn’t you? – and drip wax onto the wrapped bandages until the entire thing is sealed away from bacteria and fungus. This is an optional step, though – some grafters preferring to simply wrap the stems together or use sealing paste like Lac Balsam, which does not need to be heated. If you do use wax, use it sparingly, lest the heat damage the tissues.

If you want to try grafting yourself, it’s best to take a course or talk to an expert first, or at least look at a lot more detailed information in books and the Internet; gardening centres around you might have courses available. Once you get it right, though, you can start experimenting with turning a single tree into an orchard.

Photo courtesy of Wikicommons.
Posted by Brian Kaller at 03:59