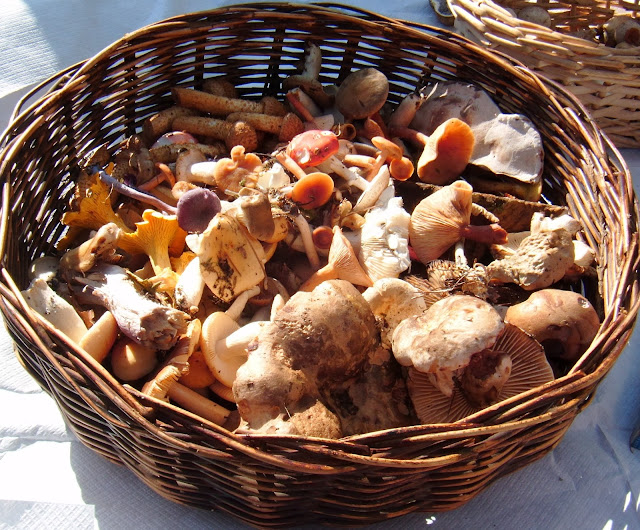 Just as a few of our elderly neighbours here in Ireland still scour the hedgerows for fruit and other treats, so some still quietly gather their own mushrooms. In parts of France and Italy it’s not so quiet; families there, I’m told, regard mushroom-hunting season as a sacred annual tradition, like deer season in my native Missouri.

Tell most people you forage for fungi, though, and they say the same thing: That sounds too dangerous for me. Even people I know who gather wild plants or hunt game fear mushrooms – the wrong one can kill you, they tell me, so why not avoid them all?

It’s a fair argument; there’s no getting around the fact that some mushrooms are deadly, and that a few people die each year from eating them. To put that in perspective, though, remember that 450,000 Americans – we’ll use the USA as an example – die each year from smoking, 80,000 from drinking, and 32,000 from car accidents. Food poisoning sickened a whopping 48 million Americans last year, and killed 3,000 – including people who had done nothing more dangerous than eat the wrong fast-food burger. How many of those were from eating mushrooms, on average per year in that country?

Seventeen. Not 17,000 – just 17, or one-half of one per cent of all food-related deaths. Most of us, moreover, eat wild mushrooms all the time, from restaurants or jars at the store, so we obviously believe that someone is picking them safely. Most of us simply trust food sent from strangers more than we trust our own ability to learn.

To put the risk in perspective another way: Ireland has about 3,000 species of mushroom -- continents like North America have many more – and 25 are deadly poisonous, according to local mushroom expert Bill O’Dea. Only about 50, however, are deemed “edible,” while the other 2,925 are not usually lethal but are unsuitable for other reasons; they taste bitter, smell bad, give you indigestion – one “inedible” mushroom is even spicy like a hot pepper, and in Italy is dried and ground like cayenne. A few are edible under certain circumstances: the ink-caps that we pick on our property, interestingly, are perfectly edible unless you’ve drunk alcohol recently, in which case a chemical in them reacts with the alcohol and gives you stomach cramps. 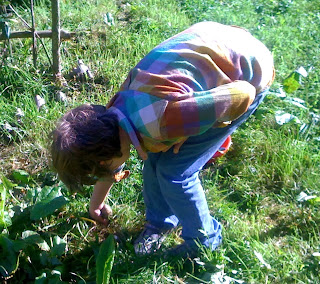 You need not learn 3,000 types of mushroom, though, or however many exist around you; rather, learn a few common, safe and unmistakable species and stick to those. Italian mycologist (mushroom scientist) Jonathan Spazzi, who grew up in one of those mushroom-hunting families, said this was how they learned as boys; first one common edible with absolute certainty, then two, and so on.

My nine-year-old and I have followed the same method, and while we still don’t know most of the mushrooms we see, we know enough to occasionally return with a basket of food. Even then, we began deliberately, first taking a couple of courses under trained mushroom experts, buying a few books with great detail and large pictures, consulting elderly neighbours who know what they’re doing, and sticking to our small but gradually expanding repertoire.

Even if you know a mushroom is edible, you should still avoid it if it grows by the roadside, where it could absorb toxic fumes, or if it grows out of wood that is itself toxic, like the theoretically edible ear fungi that grow on poisonous elder. Just a few days ago I found some amazing oyster mushrooms growing in the one place that was worse than useless to us – feeding on the timber of our garden beds. We would have been fine if they had grown on a nearby tree, or on an old log – but the timber might have been chemically treated, so we have to consider the mushrooms inedible … and they continue to eat our garden beds.

When I first took us on a mushroom-hunting course with the aforementioned Mr. O’Dea, I did not walk into the woods with expectations; I had looked for mushrooms before and found nothing. Once we began, though, we saw them everywhere – partly because we were in the kind of lush old forest they like, and partly because we learned to notice them. When everyone in our group returned, we had all found several basketfuls; edible puffballs, that we had to break open to test – if they were black on the inside, they were inedible “earth-balls.” We found chanterelles, that most edible mushroom that makes an amazing combination with steak. We found inedible sulphur caps, the hot-pepper mushroom I mentioned – and most memorably the infamous stinkhorn, its powerful smell detectable from a distance. A bit of experience, and suddenly we saw a world of mushrooms all around us. 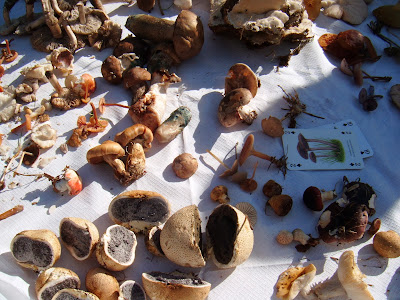 Spazzi, who led us on our second course, created a very useful chart to help amateurs like ourselves. It places dozens of mushroom varieties in a flow chart, and you as you count characteristics you narrow down the possibilities. If it’s a “mushroom-shaped” mushroom – you know what I mean -- see if it has gills. If it has gills and the stem snaps, it’s Russula or Lactarius, and if it breaks into fibers, it’s something else. Then you look at the spore colour, the shape, whether it has a ring, and so on, and you see what kind of something else it is. By learning this basic chart my nine-year-old can find a large and unidentified mushroom in the Bog of Allen, casually snap the stem, pinch the cap, declare it an inedible Lactarius and move on. Neither of us knows the exact species, but we don’t need to.

Learning even something about the various kinds of fungi around us, though, lets us see the world around us from an entirely new angle. We tend to think of the world as consisting of plants and animals, part of a life cycle dimly remembered from old textbooks: one inhaling oxygen and the other exhaling it, one creating food and the other eating it. Fungi are the forgotten member of the Trinity, quietly recycling the world under our feet and forming the bottom half of the cycle. Threads of mycelium fungi weave through the ground under our feet like fibres in a mattress, turning wood, dead matter and even rock into soil. Only a few gain our notice, and then only when they poke their reproductive “fruit” out of the ground -- mushrooms.

We often group them with plants, but they are genetically closer to animals, breathing oxygen and eating plant and animal matter as we do. Some fungi actually prey on living animals, fishing for tiny worms in the soil or erupting mushrooms out of insects like aliens in a horror film. In humid areas they form nets like spider webs, catching leaves before they hit the ground. They include the largest and oldest organisms on earth – one in Oregon, genetically all the same living being, covers 2,200 acres of land and is thousands of years old. Visit it, though, and you see nothing but a forest – it has no presence but threads in the ground.

According to mycologist Paul Stamets, mushrooms were the first living things on land, breaking down rocks like lichens do today and making way for plants – and after extinctions like the meteor that killed off the dinosaurs, “mushrooms inherited the Earth.” In his talk “Six Ways Mushrooms Can Save the World,” Stamets also describes how mushrooms can be used to fight invasive insects, create cures for various diseases, create ethanol for fuel, clean up toxic waste sites and rebuild sterile land. Some fungi forge an alliance with the aboveground trees, living on their roots and absorbing the nutrients they need, to the point that many trees cannot survive without their partners. Many mushrooms appear around certain trees, and experienced mushroom hunters look at the trees above as often as the ground below.

Our ancestors probably ate mushrooms extensively, and probably saw far more of them. Even our “wilderness” tends to be managed, with humans clearing away the old trees and fallen wood that once sustained centuries of mycelium. In the time of early humans, of course, unbroken trees stretched from Ireland to Japan, the ground covered layers of decomposing wood. In his book “The World Without Us,” Alan Weismann describes one of the last patches of original forest in Europe, and seeing giant trees host mushrooms the size of dinner plates.

Humans can rebuild that kind of healthy relationship with mushrooms; I know an old man who owns acres of deep woods in County Clare, and I asked him why his land is so lush. He told me that he pollards his trees – trims and prunes them, in other words – and buries a portion of the wood, so the mycelium thrive and the soil stays healthy. His land management system depends on his relationship to fungi, and like all the other living things on his land, he treats them with respect.

If you want to use mushrooms yourself and have neither an expert nor personal woodland, you can still use them without having to buy a plastic package each week. Try buying them in bulk, as we did once, and preserve them by pickling or drying them. You can also order little bullets of mycelium to implant in logs, which develop into mushrooms in a year or two. If you have a mushroom farm nearby, you can ask for some of the spent soil for your garden –it is often not completely spent, and yields some mushrooms along with your garden plants. If you can encourage mycelium in your soil, you could get the same patch of ground yielding mushrooms year after year.

We have several species growing under our land, and we keep an eye out for signs of their gift to us. While getting a beetroot from the garden the other day, I pulled away the leaves and found that under them, between the familiar roots, were ink caps sprouting everywhere. Our garden has been growing double crops this year, edible plants that turn the soil into food and mushrooms that turn the plants back into soil again. 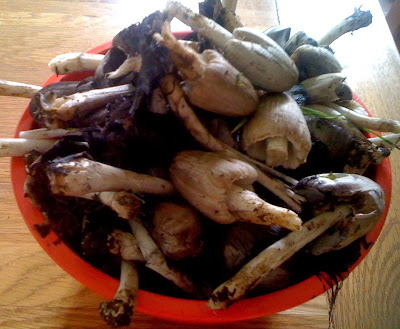 Fascinating article. I was excited this fall to adda second species to my foraging, called here, "hen of the woods," among other names. (Morels come up every spring in the asparagus bed, so that was the first species I learned to gather!) Because, hen of the woods grows at the base of oak trees, I still find myself unconsciously glancing to the base of oaks for the tell tale signs.

We’re very lucky have an excellent mushroom festival
nearby, which is my yearly opportunity to learn the local mycology. It’s a setting where it is easy to catch the enthusiasm (or obsession).

Are you allowed to give us a copy of your mushroom chart? I would love to have it.
And I really enjoy reading your website.