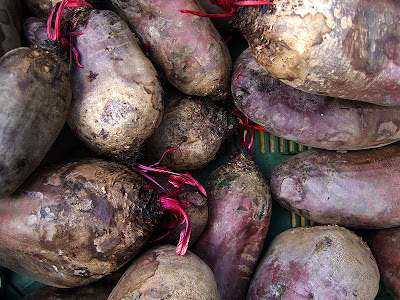 Some families split over political parties or religious faith. Mine split over beets. Some relations insisted on having bowls of boiled beetroot at every major meal, while the beet-haters complained all the while. I joined the anti-beetroot faction in childhood after finding them bland and mealy, until in adulthood I discovered the many other things you could do with the vegetable.

Beets – or beetroots as they call them here – does very well in most temperate climates, growing large over the summer and often remaining intact and quite edible even through the winter. Every part of it is edible -- leaves, stalks and roots -- and it comes in many varieties beyond the familiar red: yellow, pink, even striped.  It makes good animal feed, sugar, wine, and a variety of dishes, including:

Beetroot leaves: Drizzle a bit of oil into a pan over medium heat, throw in a pat of butter and let it melt. Dice a large onion and stir it in. While the onion is sautéing, wash the leaves and chop them.

When the onion pieces have turned golden brown, put the chopped leaves in the pan, pour in a cup of vegetable stock, and place a lid over the pan. Let it sautee for about five minutes or so and then check to see if it’s done. Add a sprinkling of lemon juice and a dash of paprika, or experiment with the spices you like. You could serve the leaves like spinach, as a side dish, or use it to fill a crepe or an omelette, or mix it with scrambled eggs.

Borscht: In this vegetarian version, first heat the oven to 250 degrees Centigrade. First peel about 500g of beetroots, slice them into cubes, drizzle a little olive oil over the cubes and toss them around until they are lightly coated in oil. Stretch aluminium foil over an oven tray, spread the cubed beetroot over the tray and put it in the oven for an hour.

While that is roasting, take a large pot and drizzle the bottom with oil and butter. Dice two large onions, put them in the pan and stir them around, and then do the same with about 100g of cabbage, three stalks of celery, two large carrots, and – just before the end – some garlic. Let them sautee until they are soft and lightly golden. Then pour in a litre of vegetable stock and add 10 ml of lemon juice, 10 ml of dark soy sauce and stir in. Finally, take the beetroots out of the oven and add them to the pot.

I blitzed the soup with a mixer, but if you don’t have one you can just mash up the chunky bits. Then pour the borscht into bowls and put a dollop of sour cream in the middle, and sprinkle a bit of dill and chervil over the top.

You can make pink mashers by mixing beetroot mash with potatoes. You can cut your beetroots into cubes, put them around a chicken in a pan, and roast them in the oven. You can dry them in a dehydrator or solar oven, and keep in jars on the shelf until you need to make soup. Come up with your own possibilities and share them; beetroot makes a great crop for winter nights, and we should start using it to make things most people actually like.

Photo courtesy of Wikicommons,
Posted by Brian Kaller at 19:46

Pretty much I only knew pickled beets growing up. But we picked up the borscht habit living in Kazakhstan - as well as some good cold beet salads. I pickled some in brine a few weeks ago and so far they just taste like raw, salty beets -- which is pretty good as far as that goes. But I may try to spice things up with the next jar.

What brought you to Kazakhstan?

I belong to the PRO-beet side of the family. All of the recipes that you posted sounds so good, Bri. We did a farm share one summer and were inundated with vegetables & fruit. Thank God, recipes were included, because there were some veggies that I never cooked before in my life. I remember doing a beet leaf one too.

Go Beets! The pro-beet faction has Imy to thank for our good taste.