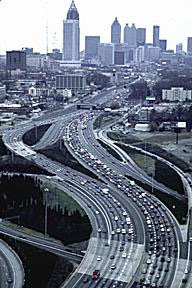 I spend eight hours a day in an office in Dublin, three hours a day on the bus there and back, and an hour or so sipping coffee and talking with friends at lunch, and I just figured out how much of that time I spend without a radio blaring loudly in the background.

It’s zero. Virtually every public and corporate space I visit -- lift, office lobby, grocery store, doctor’s office or petrol station, every space -- has overhead speakers and a piped-in sound system, which has no reason to exist but seems to grow louder each year. Most places play the same twelve songs over and over, the reproductive and scatological obsessions of adolescents played to underage children and pensioners alike, but the choice of music is not the main issue. The problem is that most people I know have ceased to notice this background and talk over it --- again, more loudly each year.

When I ask, shouting to be heard over the speakers, if they could turn it off, most people look at me befuddled; they are unaware the noise exists. They are obviously not enjoying something they are unaware of, so you might ask why they play the speakers at all. Yet when I ask bus drivers and store managers to turn the noise off, or even down, they look offended.

My co-workers moved into a new office recently, and the first thing they did was to turn on the radio; I asked why, and one said, surprised, “Well – we need to have something on.” When the radio was off and he heard only the hum of computers, the click of keyboards, the whirr of printers, the chatter of co-workers and the distant murmur of cars and horses outside, he felt unnerved.

We live with a great deal of background noise – a city bus idles at 90 decibels, and as the decibel scale is logarithmic that level is 10 times louder than 80 decibels. Many people today, who grew up with rock concerts and background construction, can expect to lose their hearing at a much earlier age than earlier generations -- a 1997 study of the elderly found that hearing loss doubled in the 30 years between 1964 and 1994, and we are almost 20 years further on from that. The constant noise of speakers might be an attempt to drown out the increasingly loud background, but it stacks the mountain of cacophony ever higher.

Most of us can only choose to buy our own headphones and MP3 players, meaning that I and all my fellow bus passengers spend the hours locked in our private reveries. Everyone has their own musical tastes, of course, and at six in the morning most people do not feel the mood for conversation. The problem is that everyone around me feels compelled to isolate themselves inside headphones; even worse than everyone being forced to listen to the same electronic media, everyone is forced to listen to their own.

I see the effects of this with friends and family, some of whom listen to Rush Limbaugh, others to Noam Chomsky, others to the Bott Radio Network. People can listen to whatever they want, but if they spend all their lives enveloped in the political and religious bubble of a single group, they lose the ability to commonly understand events.

Like any of us, they hear the latest news headlines and incorporate them into a larger story that they believe is happening all around them – I write about how the world’s fossil fuels are running down, and since fossil fuels power our travel, our farming, our electricity and our human economy, their slow decline means those things will change or be destroyed in what has been called the “Long Emergency.” Since I see that as the most central issue we face, I tend to see everything else --- fuel costs, the Arab Spring, the Eurozone crisis – as part of that larger story.

If, however, you see the overarching story of the world as a gradual ascent of humanity through progress, or as a battle between Christianity and Islam, or as a vast liberal conspiracy to destroy traditional values, then you will accept any new information only as part of that larger story, and fasten it to the rest of the story wherever it seems to fit.

If we all spend our lives listening to our own private stations, watching our own television programmes and visiting our own pet bloggers, we will not merely disagree on what is happening around us. We will not have the common language to express disagreement, or to compare notes. We will not realise that other people’s world differs from ours.

I do get to hear some of what others are listening to, though, as their music is turned up louder than their earpieces can contain. In what Atlantic magazine writer Brian Eha called “bleed-over, collateral aggravation from the personal consumer choices of others,” living in the presence of ubiquitous noise creates a kind of arms race between eardrums. We turn up the volume on our MP3 players or IPods to drown out the loud bus speakers or office radio, and then have to turn it up ever more loudly as everyone else does the same thing.

More than that, though, this ubiquitous noise brings a psychological toll. We all live in a kind of enforced solitude now, yet cannot enjoy the tranquillity that made solitude desirable. Eha cites studies by developmental psychologist Lorraine Maxwell, who found that excessive noise warps children’s attention and memory, and makes them withdraw from talking with peers. Yet she also found that, when they are accustomed to working with noise, they cannot work without it; the quality of their work deteriorates. Finally, she found that when children learn to passively accept “uncontrollable noise” in the background, they show a “learned helplessness” to changing the world around them.

No other society has ever performed this kind of giant experiment on themselves over generations, so no one has ever measured the long-term effects. I do know, though, that between the earphones, the MP3 player and the earplugs, a normal life is getting expensive.

Great post Brian. Like you I also live in Ireland and this music everywhere all the time thing has invaded the Irish pub which was once a haven of good conversation. Now lots of pubs have music, a radio and a TV all playing together and exactly as you say people are talking louder to be heard over the din.

My favorite pub is the bar in the Bridge Inn, in Mountnugent, Co Cavan. It has never been modernized, its only attractions are hard stools, strong drink and interesting customers. A haven of old world civility in a world getting brasher, louder and madder by the day.

I like your blog, and your situation sounds similar to ours. Are you in Cavan yourself? We have a lot of traditional pubs around here, which would be a great escape for me if I could spend more time at the pub.:-)

I am in Cavan, a few miles from Lough Sheelin, living in the community I grew up in. I've been a long time reader of your blog and as you say our situations are similar. With the downturn in the economy a lot of Irish people are relearning the virtues of simplicity and rediscovering the value of community. Ireland is a good place to be in the downturn, your native USA is getting really scary.

Well, barring inventing an EMP scalpel for shutting down individual noisemakers (permanently, so probably not the kindest or most legal solution), I recommend some good noise-cancelling earbuds: http://www.pocket-lint.com/review/5672/digital-silence-ds-321d-noise-cancelling-headphones-review

Also, when it all gets to be too much, just remember that here in the US, Fox News is on every public TV everywhere you go. Personally, I'd rather have the music.

I am a new reader from the US. Your blog is really lovely and smart. I appreciate your perspective. As a side note, I'm shocked that Rush has been welcomed to the Irish airwaves.

Maya, thanks for the good tip, although I'd rather not have to spend 100 euros or so to shut out everyone else's noise.

Thank you, and I hope I can keep you reading.

Neither Mr. Limbaugh or other US talk radio hosts are played here in Ireland -- I was referring to my American friends and family.

I too would be disappointed if US-style talk radio came over here. I don't object to Limbaugh, Beck and others being conservative; I object to them being juvenile, rude, aggressive, and playing fast and loose with truth and logic. Thankfully, talk radio is generally practiced differently here.

Brian, your blog is amazing! There are not many that I know of that would even address this issue!

I've just checked in on your most recent expressions Brian, and pleased to see you are still find time to write. . . .

This observation of yours - on enforced solitude when commuting with plugged-in commuters - I found thought-provoking. Us baby-boomers can remember a different world of the 1950s, so maybe can be made more aware of a much changed world when jogged into our senses by writers such as yourself! Best regards from Geoff McKee in Australia