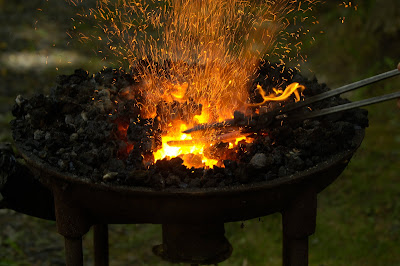 When my neighbour brought his horse to the farrier – horseshoe-fitter, pronounced like “carrier” – I sat in to watch and learn, and the farrier seemed happy to answer my many questions. He looked like a teenager, with a face you’d expect to see in a drive-through window, but he wrestled the stallion’s legs and shaped the hot iron like a man who knew his business.

His van folded out like a tackle box, with rows of hanging tools and a miniature forge like a barbecue, and when the shoe was ready he kept the stallion calm even when the hot iron caught its fetlock on fire. He told me he apprenticed for four years to learn his trade, and when I asked how quickly someone could learn the basics, he said, “Four years.” No shortcuts.

Once young men like him were normal; crafts and craftsmen whose callings – smiths, wrights, thatchers, tanners, millers and coopers -- survive only in surnames. Each town had its own set of craftsmen, known to everyone and identifiable at a distance by their clothing.

Nor would the farrier’s age seem unusual decades ago; children apprenticed from an early age, learned a skill for several years, and entered the world as craftsmen at an age when teens today are looking sullen in a corner of a mall. Only today do we assume that everyone must spend their prime years bored, warehoused and indebted.

Of course, most people did not attain such rank, but most people of any rank had a palette of survival skills unknown to almost any modern person. Farmers with little money or formal education would have known how to deliver a calf, weave a basket, butcher a pig, keep bees, shear sheep, turn autumn fruit into wine or spirits, make hay and silage, forage for wild plants, dig the peat bog for winter fuel and coppice trees on a timetable that stretched across the generations.

You can see such casual knowledge on display in, for example, cookbooks from a century ago, which began recipes with instructions to “pluck, draw and wash” birds before cooking, or to first “prepare the sheep’s head in the usual way,” assuming this was something any idiot could do.

A world of craftsmen creates an economy alien to modern Westerners; instead of cheap belongings meant to be thrown away quickly, goods had to be made durable, to be fixed, recast, re-forged or re-sewn over and over. The mountains of trash that rise outside our cities did not exist then, nor did the Texas-sized garbage patch in the Pacific, for few goods were thrown away.

Such an economy had few corporations or anonymous transactions. Writers from a century or two ago described recognizing particular barrels, nails or saddles as we would recognize someone’s handwriting, and the craftsman’s reputation hung on the quality of their work. When everyone knew where products came from and could identify the makers of the superior and inferior work, they could reward the hardest-working and most skilled craftsmen with their business – what used to be called capitalism, before the word came to mean the system we have today.

Today, of course, we drive long distances to buy underwear and palm pilots made to last a matter of months and be thrown away. We never meet the Third-World workers – possibly slaves -- who make such products, nor the crew that shipped them across a planet, nor the truckers who delivered them to a store larger than the Hebrew Temple. Few craftsmen remain in this world, and those that remain are often elderly hobbyists. Our modern system won’t last forever, though, and we know a world of craftsmen can be sustainable for centuries -- because it was.

I asked what work there was for a farrier these days, and the young man said he had more work than he could handle. Few people in Ireland or the USA can say that these days, as the people have less need of marketing managers and web designers. But horses, he pointed out, will always need shoes.

Photo of US farrier Pete Cote at work, by William D. Weisenburger Jr., EdD. Used with permission from www.wdwjr.com.
Posted by Brian Kaller at 23:08

I repair antiques, and build furniture for people. At the antique store where I work, I do repairs on the furniture those past craftsman built. Some times I build one for someone. I often wonder while working on them, how fascinating it would be, if I could go back thru the centuries and talk to the fellows that built it. Because I use a great many old tools, like molding planes, handplanes and saws and chisels etc, some well over a century old, I can look at an ancient piece and kind of "read" what he did, Here, he planed against the grain, so some tear-out, there, here he chisels a joint, etc. I can kind of put my place in his shoes. I wonder if the things I make, will make someone wonder about who I was. And will he "read" my handiwork. There is much dignity in being part on a tradition. But I had to learn on my own.it took longer, probably, than a apprenticeship would have.

Years ago, for a few years, I shod horses for a living and found it hard to make a go of it because so many people were not willing to pay for having the horse shod every 6 to 8 weeks. The exceptions were the folks working drafters, who knew the value of the work and who knew the value of a well-shod horse working for them. They were also lovely horses to work on as their owners kept them gentle and obedient through steady work and kindness.

The farriers who did well were the ones who lived close to the city and were paid with city-money.

Fascinating. I assume those craftsmen, in turn, read the work of people centuries before them. Most of us don't get a sense of that anymore, of affecting others across centuries.

Where I live might be different than here, and even here there is not a vast market for traditional crafts. I suspect it will get better.

I watched my father shoe his own draft animals (by then (the '60's and '70's), horses were only a hobby on his farm). His father had once been a blacksmith of some reputation (as well as a farmer). My father probably had much more than the 4 years apprenticeship just by birthright. He also ended up with expertise in engines, tools, cattle (including surgeries to some extent), hogs, and soils (through FFA). In our modern world of specialization and isolation, we also forget that multiple trades were more common than not for most men, as they rarely earned a whole living on their land or with one employer, as we do now, and always a general idea of how to obtain and cook raw foods and game animals, as well as basic butchering. Security didn't come from money, but from calluses.