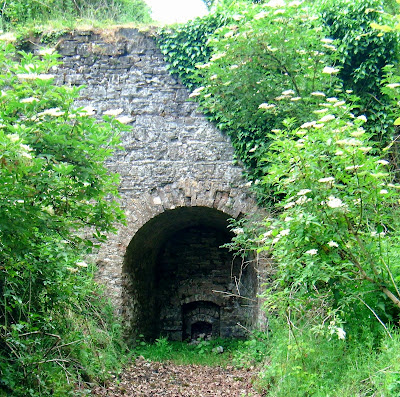 For those who don't know about it, Low-Tech Magazine has carved out a unique and desperately needed niche on the internet -- well-researched papers, often historical, dealing with old and largely forgotten technologies that allowed societies to do more with less.From aerial ropeways to optical telegraphs, modular hardware to timbrel vaults, Low-Tech gives you the esoteric craftsmanship of the world that existed before everything became cheap, short-lived and easily discarded.

I was honoured to write a piece for them last year, on basketry, and I'm delighted to do so again. My article on lime-burning kilns, "Burning the Bones of the Earth," will appear here eventually.

Photo: Lime kiln near our home.
Posted by Brian Kaller at 23:14

What an absolutely excellent article! Thank you. I had never made the connection between 'limelight' and limestone, nor knew of Parnell's close escape.

Thank you very much; I didn't know of them myself until recently.

Low/No Tech Magazines avidly I read. Great to see you are a contributor now.

For years your blog has been for me, among other things, a wonderful travelogue of Ireland. Thank you sir!