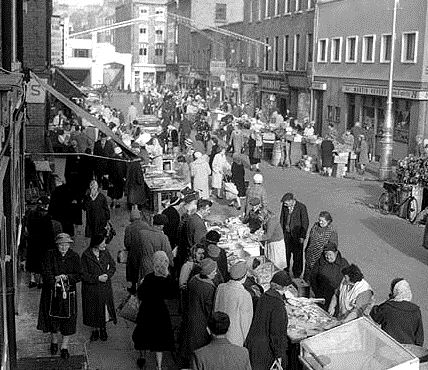 Every elderly person I talk to now, who grew up in the Irish countryside, grew up with the sound of carts on the way to market. Supermarkets only reached many parts of Ireland in the 1970s, and only now are US-sized shopping centers springing up outside of each town. When local elders were growing up, however, farmers drove their donkeys or horses to town, and there they sold their goods directly.

“Different people would specialise – milk, turf, vegetables,” said one farmer in a 1975 national radio documentary. “They used to bring out messages to town for people, like postmen, or transport devices to repair shops. Family members would sleep in the carts on the way there and back.”

In the documentary, horticultural economist Peter Bobrick said food was actually more expensive in rural parts of Ireland after grocery stores appeared. “The farmer might have to drive long distances to the market, and drive further distances to get back home again, all to buy the same vegetables that they grew in the first place for not much more money than he sold it,” he said.

William Cobbett had made the same observation in rural Britain a century and a half earlier, in his book Rural Rides.

“After quitting Soberton Down, we came up a hill leading to Hambledon, and turned off to our left to bring us down to Mr. Goldsmith's at West End, where we now are, at about a mile from the village of Hambledon.

When fairs were frequent, shops were not needed. A manufacturer of shoes, of stockings, of hats; of almost anything that man wants, could manufacture at home in an obscure hamlet, with cheap house-rent, good air, and plenty of room. He need pay no heavy rent for shop; and no disadvantages from confined situation; and then, by attending three or four or five or six fairs in a year, he sold the work of his hands, unloaded with a heavy expense attending the keeping of a shop.”