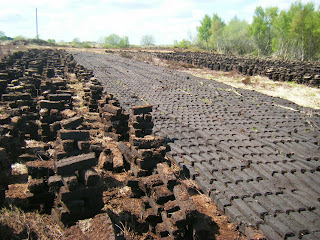 The Girl and I spent Saturday walking to the bog and gathering our turf for the winter, with the help of our neighbour and his tractor. For those who don’t know, we live in a dry patch along a canal in one of Europe’s largest peat bogs, the Bog of Allen.

“Turf” is the peat that lay submerged for centuries, now exposed like red earth after the bog was drained relatively dry. It is cut – by tractor these days, but until recently by hand – into strips that lie like giant ribbons of liquorice. Across vast areas of land around us the turf is still mined on an industrial scale, and packed into bricks sold for winter fuel at every petrol station and hardware store.

More importantly, however, it is burned in giant plants that furnish much of Ireland’s electricity. At the same time, turf-cutting is being restricted by the government to protect the bogs as wildlife habitats. Between the turf industry on one side and the cutting bans on the other, the local farmers who cut their own turf are growing rarer, squeezed in the middle. 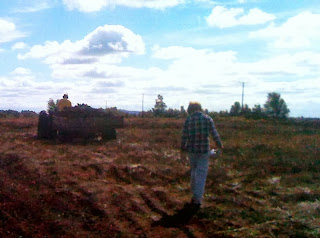 We bought a modest strip of turf from our farmer friend last spring and had to “foot” it – break up the liquorice and stack the pieces cross-ways – several months ago. Now, as the days grow shorter and the rainy season sets in, it was time for The Girl and I to load up the now-dried bricks – if you can picture bricks being maroon, shaggy and misshapen – and cart them back to our land. Our neighbour drove his tractor on a winding path out of the bog, through clumps of forest and cow pasture, with me running behind in the distance and The Girl behind me. We dumped the turf – which we should be able to stretch out at least three winters – into a giant pile in front of our very bemused chickens.