The world that was 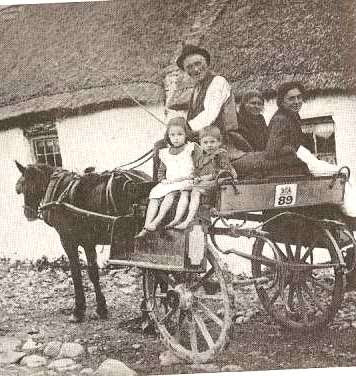 “Child summers seemed longer when words like traffic and pollution were in some far-distant purchase. A woman's place might have been more firmly in the home then, but the home was central to people's lives, and to the economy of the whole community -- not just a place to watch television and fall asleep. To people's homes came the tradesmen -- travelling tinkers, coopers, goose-pluckers, firkin-makers, tailors and dancing-masters, beggarmen and women. And it was the place where people danced, told stories, laid out the dead, rather than going to some business to do so. All these made the home the focus of life…”

“In the same way, as difficult and dangerous the adult work seems to us, it was much more a children's world, for few people remember anyone who would harm a child, nor were there any media around that could corrupt them. Children ran everywhere freely and safely … There was less hurry to get out of childhood and into adolescence. Boots and shoes were something to get used to, and unwillingly …”

“We took our boots as far as the stile, hid them there, went to school barefooted, and on the way home put them on again. Our parents didn't want us to go barefoot until May, but we had it going from March. When you got boots, you took them to bed with you, and I can well remember the smell of leather under the pillow. You were supposed to put padding under the heel by robbing birds' nests, or you got welts on your feet.”

Yes, I think the western world lost a great deal when they made home a place to leave vacant all day long, until evening comes when they enjoy it for a few hours or so. Probably ditto for the idea of community as the place you live your life, personally and professionally. So many people work far away from both home and community these days, and we're all the poorer for it.

Amen. Also fascinating to me is how small most Irish houses were, yet most people remember the close quarters as warm and intimate. Most people then would be amazed, I suspect, at how much of our lives we live alone.