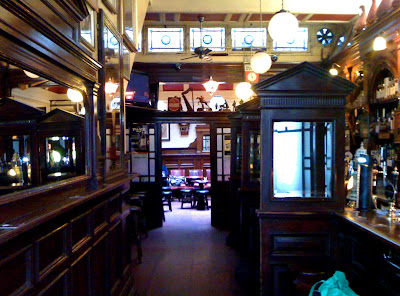 On this day off from work I’m running errands in Dublin, and most of the city stretches damp and gloomy across the seaside. I walked past endless streets and side-streets, alleys and shortcuts, all a maze of cement and stucco walls coated in graffiti and green moisture. Occasionally a twisted metal shard reveals a pile of discarded cans and plastic that will not disintegrate into flowers and mushrooms like the sodden bits of wood are doing.

Then I walk into this place, one of the old pubs of solid wood and stone, built before the discarded world in invaded this neighbourhood. I’m sipping Irish coffee and listening to opera faint in the distance. Near me two old men discuss law and money, police and civil servants, philosophy and belief -- the gears and levers of life.

Truly, though, they seem to use language as old storytellers did in pubs like this, shaping the consonants and vowels and the singsong pitch like they were playing a concerto together, throwing in Latin and Gaelic – “Mirabile Dictu!” one exclaims at one point – and growing more animated as they work out the big questions of the universe. Soon some Germans come in, apparently on holiday, and have their own gentle argument over Guinness.

I realize I’m being romantic, thinking of this as the real, traditional Ireland, rather than the graffiti or the broken liquor bottles. I do know it represents something I treasure, something hard to find anymore. I like your place, I told the barkeep.

Did everything in the neighbourhood used to look like this? I asked, nodding outside to the mix of Georgian buildings and graffiti-covered wrecks.

He said that most of the old neighbourhood still existed a few decades ago. “Then everyone started to get rich, and for a while everyone turned over the property. They took out most of the old buildings and put in things that no one respects …. Everything looks ugly and tacky now.”

With all our technology, I said, I don’t know why they can’t build now what we did then – a landscape people will respect.