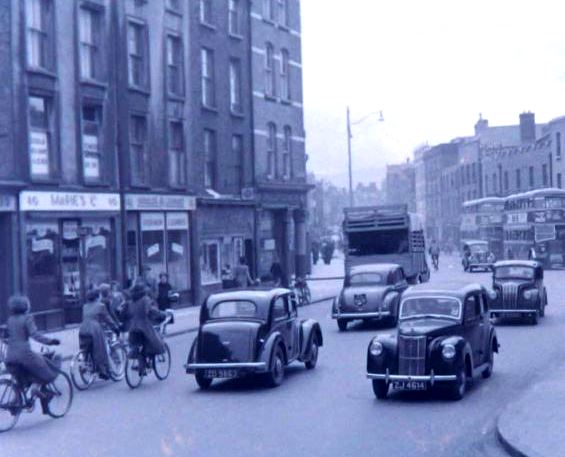 People hadn’t much money but times were good. You could dress up and carry your handbag up O’Connell Street and not feel frightened. … There were no shutters, drunks or drugs. Everyone was out walking on every corner, and no one ever felt afraid.

When there was breaking news all the boys on street-corners rang bells shouting “Stop Press,” and everyone stopped to hear what the news was.

--- Frances O’Brien, recalling memories of Dublin in the 1930s

In the mid-thirties and forties having a bicycle of your own meant freedom to come and go just as much as a car means to the people of today… During the war years there was no petrol for cars or late-night buses so there was no other way to get about.

The centre of the City used to be just one big mass of bicycles being taken care of by men and boys who made jobs for themselves doing that while the owners were off at a theatre, a dance or a film.
-
--- Lillian Healy, recalling Dun Laoghaire, County Dublin

Twenty years ago you could leave your bike on the footpath and nobody would touch it. Everybody had the time to talk, and you didn’t have to jump out of the way of lunatic drivers behind the wheel of fast cars. (Today) no-one has the time to spare, no one has a moment to talk.

Or there’s the time wasters – the ones who think that taking it easy or slowing down means sitting down and having a few cigarettes and drinking a cup of coffee, watching the day go by.
-                    --- Con Moloney, Mountrath, recalling County Laois in the 1920s.