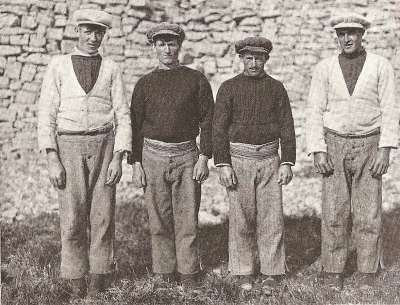 At the end of the island, at the pier where people left their boats to go to the mainland, there was a post upon which hung a hat.  At the time, the men of Achill would have worn a cap, but when going into town, for that little bit of formality, any man who was going to town would put on that hat and then leave it at the post when he returned.

A visitor in the 19th century recorded he saw two men in a running contest around the island to decide which one had the right to marry a certain woman, "which was by no means uncommon."

-- "Leave Your Hat At The Sound," RTE radio documentary about the men of Achill Island, 1974.
Photo: Islanders, courtesy of Irishphotolinks.com
Posted by Brian Kaller at 22:06