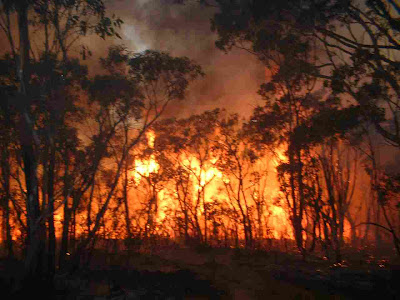 Right now I'm reading Six Degrees, by Mark Lynas -- one of the best books on climate change I've ever read.

When climatologists say that global temperatures could rise six degrees, that doesn't sound like much to laymen like us -- it sounds like everything getting six degrees warmer, which sounds pretty good in Ireland. In the same way, sea levels rising ten meters doesn’t sound like much either – the beach itself is only ten meters across, isn’t it?

But such a rise in ocean levels would not be ten meters up the shore, but ten meters straight up – putting almost all of Dublin under water. In the same way, a rise of six degrees would not merely boost the temperature by that small-sounding amount; it would put the world and everything in it into a state of high fever.

Let’s put it this way: the last time the Earth’s climate was six degrees from what it is now, it was six degrees colder, creating an ice age. lay under a kilometre of ice, as did the United States down to Kentucky, with winter temperatures as low as -40 degrees Centigrade.

As Lynas describes, a few steps in the opposite direction could create serious problems for the natural world. Pollution from our cars and factories has boosted the climate more than half a degree. At one degree the ice sheet melts, raising the sea by about seven meters. At two degrees, the Amazon rainforest would begin to burn; they depend on a humid environment, and have no resistance to fire.

At three degrees, the situation falls out of our hands, as the massive greenhouse gases locked in the tundra flood the atmosphere, as the Arctic disappears, as the middle of the world burns away, we would see “an entirely new planet comes into being - one unrecognisable from the Earth we know today.”

The last time the planet got six degrees hotter, geologists believe, was 250 million years ago, when early life on Earth was almost wiped out.

Just as the governments are waking up to climate change, as George Monbiot put it recently, millions "have been misled into believing there is no problem to address.”

The film’s main contention is that the current increase in global temperatures is caused not by greenhouse gases, but by sunspots, based on a 1991 study that found agreement between temperatures on Earth and sunspot cycles. More scientists followed up on the study, however, and in 2004 found it completely wrong; sunspots have nothing to do with climate change.

The programme also used research that the researchers themselves have disavowed. Channel 4 used as evidence the work of Dr. John Christy, who initially found that temperatures were not rising. Dr. Christy followed up his own work and discovered he was mistaken, and now believes that climate change is real – but the film keeps using his old data, against his wishes. Oceanographer Carl Wunsch, also, says he was “completely misrepresented” by the programme, and “totally misled” by the people who made it.

Finally, let’s say for the sake of argument that the programme is right, and humans are not the ones causing the climate to change. If that were the case, shouldn’t that be cause for even greater concern? Human-caused climate change can be averted or solved by human action; unknown cosmic forces destroying our planet really would be a cause for panic.

If the century-old global expert consensus on climate change is completely overblown, we will gain by preparing anyway. The things we need to do to prepare for climate change -- restoring local communities, public transit, restoring a more traditional world -- are the same things that will help us with peak oil, with democracy, with family, with community.

And if all the experts are right by even a single percent, then everything in our lives -- literally --- depends on us taking the lives we live now and destroy them, and replace them with something that works.

Thanks for this great piece. What you found is typical when examining the claims of a small, well-funded group who are trying to create uncertainty about global warming. They often cherry-pick data, or misrepresent the research of good scientists.

When I say small, well funded group, you have to look to the USA and how a similar campaign was run 10-20 years ago (by many of the same players) to manufacture uncertainty about the well proven link between tobacco smoke and disease.

Their ultimate goal wasn't to finally disprove all the good research done to date, but rather buy time for their clients by creating a lot of noise and uncertainty, sometimes via "astroturf" groups (phony organizations with nice sounding names created merely to give a reference as a source for what turns out to be misinformation).

We are seeing the same thing today with global warming, an attempt to create a "debate" about something that is really settled science.

In the USA, the news media often in an attempt to be "fair and balanced" and democratic, assume that for any position, there is a counter position which must be given equal attention. So now a small group of outliers are given equal time, giving the mistaken impression that both nonsense and fact are merely differing opinion.

I write a weekly bulletin for amateur radio operators (see http://www.arrl.org/w1aw/prop/) about sunspots, solar cycles, and how they affect shortwave radio propagation. This year especially I've seen actual falsification of data (sunspot numbers) by this crowd, who begin with the faulty assumptions that 1-warming is tied to sunspot cycles and 2-we are entering a period of decades with no sunspots, ergo we will see cooling instead of warming. Both assumptions are wrong, but the promoters act as if it is already settled science, rather than long ago disproven hypothesis.

I was yanked into this ten months ago when I received a massive volume of email in a single day from readers who were concerned about an unsigned article in Investor's Business Daily claiming we are entering a period of zero sunspots. The article quoted Dr. Kenneth Tapping, an astrophysicist with Canada's Penticton observatory, making all sorts of claims about future sunspot activity, climate, and several other topics which are far outside the expertise of a legitimate astrophysicist. After contacting Dr. Tapping, who I was aquainted with, I discovered that the quotes were a fabrication.

Although some of the information is now a bit old (in terms of months; more outrages have occurred since then) if you go to the URL above and look for bulletins numbered ARLP017-019, 023 or 029, you will find info on how to obtain Tapping's notes along with some comments following up on the distortions in the IBD article.

Several recent books shed light on the distortions I mentioned in my earlier post:

"True Enough: Learning to Live in a Post-Fact Society" by Farhad Manjoo

"Doubt is Their Product" by David Michaels

Each of these are excelent.