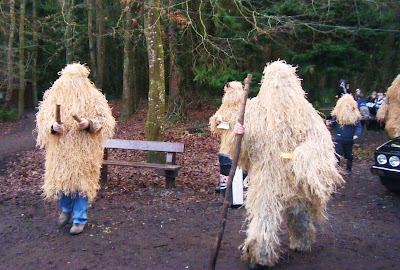 Yes, this is actually a photo of men walking through the forest near our home today dressed like haystacks and carrying clubs.

They were some of the mummers taking part in the annual Wren Day festival in the Donadea woods, where hundreds of locals gathered to sing, dance, hear stories and gather as a community after their family Christmas obligations. A pavilion was set up in the clearing next to the old castle, with a few microphones and speakers – the only bit of modern technology in the whole event – and a speaker described some of the history of the festival.

The wren, say the speakers, was sacred to the Celts – the old Irish name for it, dreoilin, means “the Druid bird.” One day a year, local “straw boys” hunted the wren as a prize, in a custom that is said to be thousands of years old. It was Christianized about 1,500 years ago to incorporate St. Stephen, whose feast day this is, and in some eras the ritual had to be carried out in secret, but it survived.

After the opening speeches, local bands launched into some rousing Irish folk music and all the children were invited onstage to dance, and many of the adults around the stage joined in. With a nod from me, my girl leaped onstage, and copied the big kids until she was halfway to Riverdancing.

As the musicians played, the children danced and the adults chatted, two groups of mummers milled about the crowd hiding from each other. The “straw boys” in the picture wandered about thumping their clubs in unison, chanting menacingly for the wren. Another group dressed in sackcloth, the “Wren boys,” carried a metre-long carved wren through the crowd, hiding it from the straw boys.

I missed the part where they confront each other – four-year-old, potty, you know – but when we came out again, the straw boys and wren boys were shaking hands to the cheering of the crowd. Both sides agree the wren would be caught but not killed, and the wren sculpture was crowned the King of Birds. 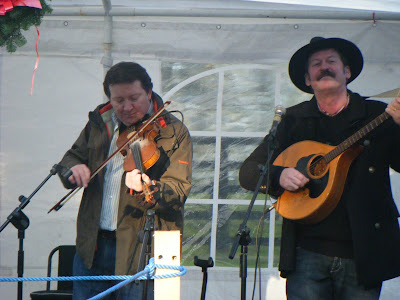 A friend of mine, who is a walking library of folklore, tells me that the slaying of the wren was the slaying of winter, a symbolic king sacrificed to save the community. I’ve been sent lyrics for two separate Irish folk songs about the hunting of the wren, and I’m sure there are more.

I like knowing that I just attended a ritual that may have been practiced by locals, in one form or another, for thousands of years, without any attempt to tie it to globalised consumer culture or to put it on as a show for tourists.

In America we don’t have any special traditions around the day after Christmas, which is a shame. The British have Boxing Day, which, while not ancient, is also a charming custom: utilities like postal service start up again, and people give little gifts to them. I admire a holiday that pays due respect to the armies of people who make sure our drinking water is not toxic, our deliveries reach us, and that our electricity stays on, and who we spend most of our lives taking for granted.

I've only just found your blog Brian through Sharyn's link. This is a beautiful tradition. I love folk songs where everyone can join in and relish each others company.

Living in Australia I regret that we don't have such celebrations and our history is so short. Perhaps we should embrace some of the Aboroginal traditions.

Best wishes for the New Year.

I love that people have been running around dressed like Cousin Itt long before there was a Cousin Itt.
(http://www.fortunecity.com/bennyhills/pun/190/cousinitto3.jpg)

In America we don't have many of these customs either, perhaps because we too are a relatively young country and we were founded by those who often left their old customs behind.