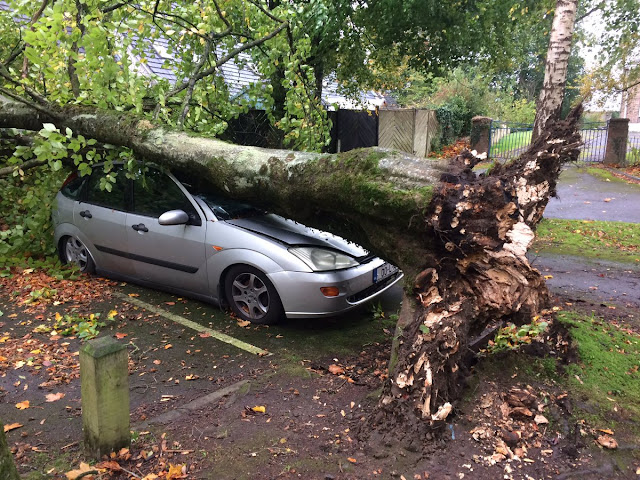 I haven’t posted much lately, as I’ve been busy with my day job, family duties and writing longer pieces that I hope to publish separately. That, and this week we had a hurricane.

A bit of background: Ireland almost never gets hurricanes, or even many powerful storms. A typical summer rain in my native Missouri gushed down suddenly, hot as a shower, for a few minutes and turning the baking land into a floodplain before swiftly disappearing. Here in Ireland, however rain is usually a cold drizzle that can continue for an hour or a week -- or in 2012, a summer.

I recently checked the average rainfall in Missouri and Ireland and was surprised to find that Missouri actually receives 53 per cent more rain per year than Ireland does. It certainly doesn’t seem like it -- Missouri might go months without rain and then make up for it in a few minutes, while here it rains more than half the days of the year.

On the other hand, the Irish countryside has two settings: 1.) cool and raining, and 2.) cool and not raining just yet. We almost never get genuine warmth - say, 30 degrees Centigrade or higher -- we almost never get snow, we never get tornadoes, or any of the more intense weather that hits most of the world. When my daughter was little I took her to visit family back home and she heard a low rumble in the distance, she turned to me excitedly and asked, “Daddy, is that thunder?” She had heard of it from books, but had never heard thunder before -- it happens here, but not often.

We also rarely get the erratic floods that hit my native state; I grew up where two of the world’s largest and most wilful rivers meet, and their floods have removed whole towns from the map. Here, though, the towns are often built at the top of walled river banks that have been repaired and rebuilt for hundreds of years, as the rivers rise and fall predictably beneath them.

Hurricanes creep up the Atlantic, but rarely as far north as this -- as I’ve mentioned, we are at the same latitude as the southern tip of Alaska. The rare exceptions make our history books, and stories of them were passed down through the generations. I’ve been reading Then There Was Light, the oral history of the gradual electrification of Ireland between the 1930s and the 2000s, and in one chapter Eileen Casey describes her home after a fuse-box was installed in her kitchen:

… Cooking was still done on gas and it was always a great back-up in case a storm might hit and knock out the whole shebang.

Which is what happened in 1961 when Hurricane Debbie decided to wreak destruction. A branch of a big oak tree fell on the transformer pole and plunged the row of cottages into darkness …This tropical “hussy” intensified to Category 3, passing over Ireland, bringing record winds of 114 mph. Tens of thousands of trees and power lines were knocked out there were few telephones in those days.

The men who lived in the cottages tried lifting the tree of the transformer pole, causing a great whoosh which could have signalled their end. Then they left well enough alone and waited for the ESB men to come out and restore their home comforts.

Until now, such events were rare, but in the last ten years or so, the old farmers tell me, the weather has gotten progressively stranger -- a heavy snow one winter, an unusual span of weeks without rain, a summer of nothing but rain, and floods that breach the usual limits and stretch over fields and towns.

Thankfully, this last hurricane did little damage -- homes here are usually made of stone or cement, and no one’s house gets blown away. The power was out for tens of thousands of people, and we had no internet for a while -- but the government got everyone’s power back on within a few days.

In any case, some people here lived without electricity even into this century, and we only got internet at our house in the last few years. If the phones went down or the power went out, I suspect, many older people here would shrug and get on with their business.

It’s going to be a healthy attitude in the years to come, as I suspect we’ll be seeing a lot more of this. Less than a week after the hurricane, Ireland is being hit by Storm Brian, the latest in a summer of storms. I was talking with locals at the village pub Friday night, and while none of them are what you’d call eco-activists, they all accept that this will probably be the new normal.

After every such event, there’s always a week or so of clean-up; the government getting the houses back on one village at a time, the tractors clearing the trees out of the road, and repairing the broken windows and car windshields. I was out jogging this morning, and hastily turned around and jogged home when I rounded a corner and came face to face with a cow in the road. I rang Liam, the local farmer, just as he was coming out of church.

“Brian, how you keeping?” he asked.

I’m good, Liam, I said -- say, is that your pasture across from the old barracks?

Well, I said, one of your cows has gotten loose.

“I’ve been doing nothing but mending fences after Ophelia,” he said. “Which one is it?”

She’s cream-coloured with an ear tag, I said. I didn’t inspect her too closely.

Photo has been making the rounds here; I'm not sure who originally took it. If it was you, let me know.