Cleaning up after storms 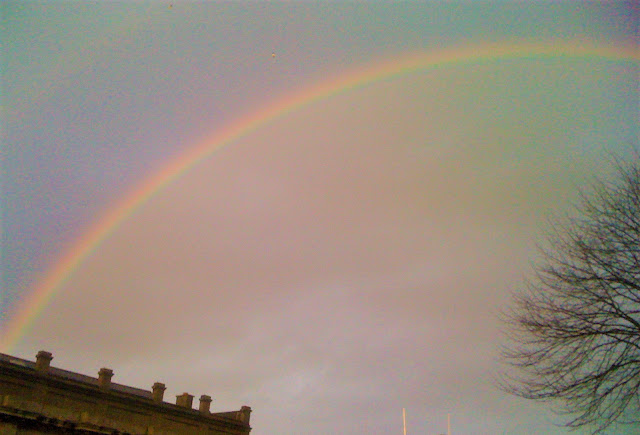 As usual on a Sunday, I came back from Mass and dropped The Girl off at her weekly medieval camp training. A few years ago I found a local expert in medieval martial arts -- an occasional advisor and extra for shows like Vikings and Game of Thrones, both of which are filmed here in Ireland -- and he trains kids and adults to become expert sword-fighters, archers and riders. It’s become The Girl’s big passion, and she now goes to historical shows and medieval fairs across Ireland displaying what she can do.

I’m pleased to see my teenager spend her spare time working hard at developing skills, especially ones that, in her words, make her really prepared for a Zombie Apocalypse situation. Lord knows enough of her peers are involved in far more destructive activities.

Occasionally, though, we still share a movie together. Last Friday night it was Strangers on a Train, and we were reminded of all the deliciously creepy scenes -- of Robert Walker staring malevolently forward at a tennis match, when all the people around him were turning back and forth; of watching a murder reflected in a fallen pair of glasses; and of Farley Granger’s hero and Robert Walker’s villain locked in a final battle on an out-of-control merry-go-round, as children laugh and scream around them.

On the way back from dropping The Girl off, I saw my neighbour Seamus, who has lived along the canal for 86 years and knows every tree and bush of this part of the bog.

“How is your land after Ophelia?” he asked, as we hadn’t talked in the fortnight since the hurricane.

Not bad, I said -- a few willows down, but they’ll come back quickly.

“I lost one of my great apples,” he said sadly. “I planted it 37 years ago, and it had grown giant and was laden with cookers.”

Sorry to hear it, I said -- the entire tree, and not nothing salvageable?

“Uprooted,” he said. “It was one of three, but the other two survived, thank the Lord. I’ve been cleaning up the apples all over the property before they go bad.”

Our trees survived, but they were also quite small and sheltered, I said -- I’ve been gathering our apples as well. What do you do with yours?

“I always keep them in a steel barrow in the shed,” he said, “and then put hay above and below. The steel keeps it cool, and the hay makes the apples sweeter.”

It took a beat for me to follow. The hay makes the apples sweeter? I asked. Why?

“Because hay is sweet,” he said with a puzzled smile, like this were obvious “That’s why cows love it.”

He tells me things like this every time -- what plants to plant together, what to keep away from each other, and how to keep food from spoiling. He could be pulling my leg for all I know, but sometimes I'm able to test his folk wisdom, and darned if he isn't right. 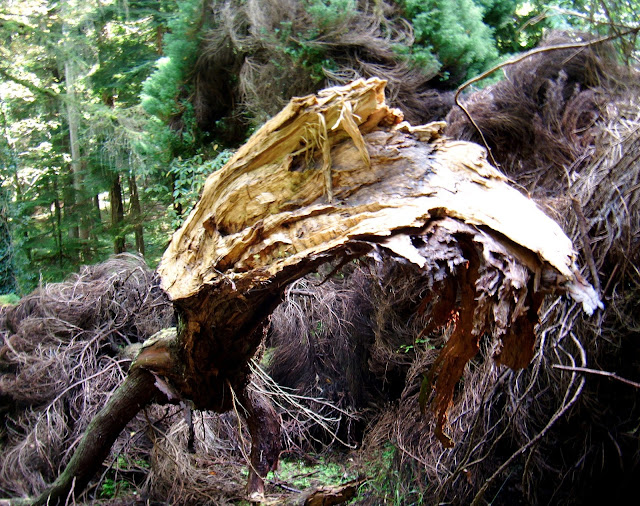 We finally got our chainsaw fixed, so The Girl and I spent the afternoon trimming the trees that broken or strained by the hurricane. A fallen tree anywhere else on our land is no big problem, but along the front of our property any downed tree a.) blocks the only, single-lane road, b.) falls the other way and destroys our greenhouse, and c.) takes down the phone lines in which they are all tangled.

Because of the overhead lines, I can’t cut some of the trees myself, so I’ve been fighting the county for months to trim the trees, and they said they would months ago. They still haven’t done, though, and I expect more will be brought down by the winter winds.

Thus, we set off to judiciously cut what we could, with me cutting the trees one by one and The Girl pulling on them with a rope and watching for cars. One by one we took down four willows and a dead elder, and when they crashed down into the road we set upon them with the chainsaw, axes and secateurs like lions on a gazelle before any cars came along.

On the fifth tree the chainsaw broke again, but by then we had cleared the worst of it. I’m never pleased to take down a tree, nor am I happy with the gap in the hedge, but none of these trees had been around very long, nor did their irregular plantings make a proper hedge. Rather, they were all about 20 years old and still healthy, and they will send up shoots next year, and we will bend them down and weave them into a proper, near-solid hedgerow that should provide shelter and privacy. 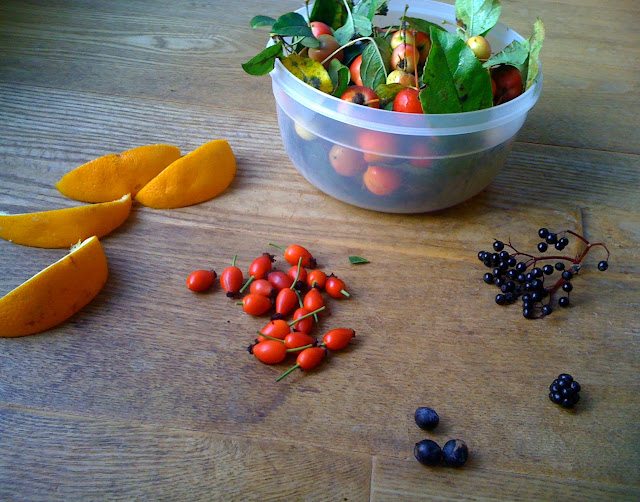 I gathered the last of the apples from our trees, along with rose hips from our hedgerows, and I decided I would pickle apples again and use the peelings and hips to make compost jelly -- jelly from whatever you have.

For the pickling, I mixed about 500 ml of cider vinegar with 200 ml of water, mixed in 100 ml of sugar and added five cardamom pods, one clove, six peppercorns, about 5 ml of cinnamon and 10 ml of chili flakes. I diced the white interiors of six apples and stuffed them into a Kilner jar, with peeled and shaved ginger mixed in, and packed them as tightly as I could.

Once the liquid had boiled I simply poured it over the apples and ginger until the jar was full to the rim. I then tapped it gently to release some of the bubbles, and as it cooled the vacuum lid sealed shut, so no hot-water bath was needed.

I took the peelings and apple cores -- 766 grams of them -- and mixed them with 100 grams of rose hips from our hedgerows and a chopped-up lemon. I put them in a pot with 1.5 litres of water, and boiled them for an hour while we played Civilisation. After an hour I strained the remaining liquid -- 600 millilitres -- mixed it with 450g of sugar, and boiled it on high heat for about 15 minutes until it set as jelly.

I had tried this a few days ago, but the jelly never set properly, only gradually going from liquid syrup to soft candy without ever reaching the magic stage in-between. I realised I needed a higher heat than most recipes recommend -- perhaps because Ireland is so damp and humid, or perhaps our stove is just slightly off. The second time was the charm.

As a result, apples that would have gone to waste were preserved for the winter, and should remain good for at least a year.