A bridge to the technosphere 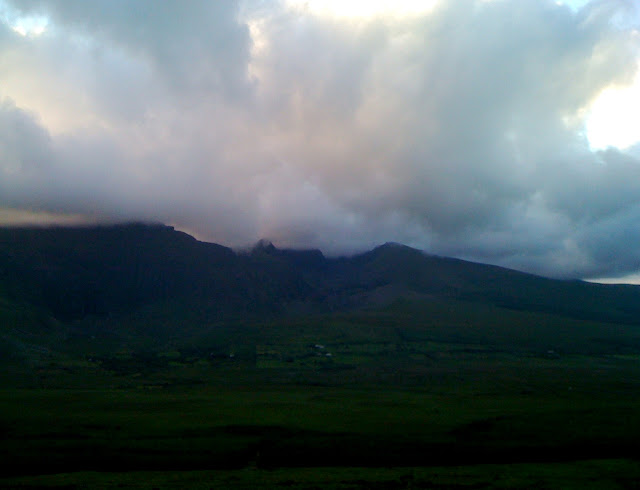 For half the Irish year I ride my bicycle along the canal in the morning to the village where I pick up the bus to my job in the city, and ride back again in the evenings. The morning ride gives me a chance to see the landscape when the sun is still drying the leaves of dew and shooing away the clouds of mist from the bog, when the fish are beginning to stir in the clear waters below and the herons are shaking off sleep on their perches.

Similar patterns stretch across the land, the water and the sky. The dendritic patters of the tree branches of the trees that line the road resemble the tributaries of the streams that flow below them, with tiny streams feeding larger ones and then joining others, feeding the fields of wildflowers. They resemble the veins of my hands, more visible now than they used to be as I grow older. They resemble the mycelium I see in our compost, which I tried to disturb as little as possible today when I spread it across our new garden bed.

As Albert Bates put it in the permaculture course, we see the same patterns across all scales – the shape raindrops take on leaves of grass are governed by the same laws that draw matter into stars and stars into galaxies. The tessellating pattern of water as it twists and curls around rocks in the stream, resemble the mist curling and twisting as it floats away, purged by the light of the dawn, or the patterns of clouds as they ripple over the Irish landscape.

The morning ride shows me the patterns of the farmers who live near me, before they are outside at work. I see that Liam mended the fence where the calf broke through, that last night’s wind blew some trees over the phone lines, and that Liam won’t be reachable by phone this week. I see that Mick’s family have laid flowers on the cross they placed along the canal, on the spot where his car went off the road last year, drowning him. His girls are only teenagers, and I suspect most people still leave his old space empty in church, his seat empty at the pub.

The ride home, likewise, gives me a chance to see my neighbours as they are busy on their plots of land. I usually see my neighbour Seamus, in his eighties and still planting his own field, and Martin, proudly showing his young cows and antique cars. I see other neighbours who never took to the car culture, and still ride bicycles or even horse-carts into the village and back.

You see, once I step on the bus to the city, the world changes. I spend three hours on a bus and nine more in an office, staring at screens, sitting in seats and dealing with the carrots and sticks of human hierarchies. I live, as most of us do out of necessity, in what Dmitri Orlov calls the Technosphere, the world of user names and passwords, computer screens and electronic noises, online profiles and digital icons.

I try to ignore the flash and flicker of advertising on the walls of cafes, office lobbies, buses, trains, cars, bicycle racks, bus stop shelters and toilets. I wear earbuds to muffle the piped-in soundtrack of advertisements, talk radio, and pop songs broadcasted into buses, restaurants, and offices. Out of necessity, I deal with the conceptual hierarchy that humans have created -- software programs, paycheque numbers and manager titles -- and pretend they represent reality.

I understand the need to visit the Technosphere, and it has its uses -- look at you, reading this on a blog. In living my life and raising a daughter, though, I always try to keep one foot in that artificial world and one foot in the real one, the one that has been here for uncounted lifetimes before us and will continue long after the Technosphere has passed into legend.
Posted by Brian Kaller at 16:15

While there are a lot of fractal patterns in our world, thank goodness there are also emergent behaviors, so we will still get surprises as things evolve and complexify.