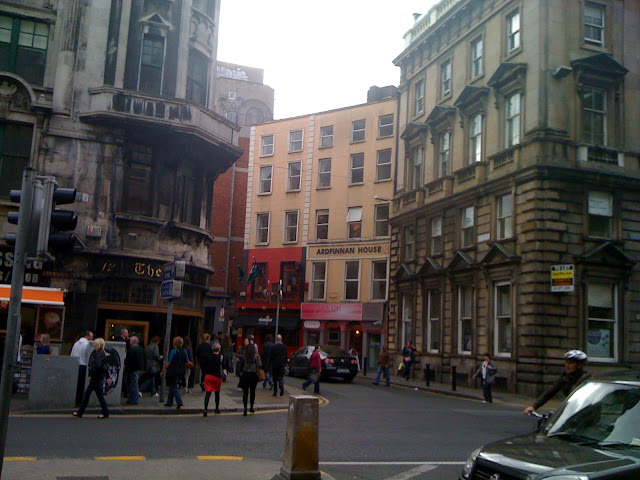 Friends of mine around the world are talking about little but the US election this year, even though it’s several months away. There actually are 194 other countries in the world, though, and most of them have elections too – many of which are quite instructive, both in the way they parallel the US election and in ways they are very different.

Last Friday was Election Day here in Ireland – my first vote as a citizen -- and this election campaign, like that of the USA’s, is without precedent in recent memory. It’s a bit different here because we have a parliamentary system, vote for more than one person to represent our district, and have first and second choices that factor in when votes are tallied -- a system that allows for multiple parties that must work together in coalition. It has many advantages over the USA’s system, in which people choose between the least awful of two often-similar candidates, and one gains enormous power by some slim margin.

In our case, the two biggest parties are Fianna Fail (rhymes with fall, not fail) and Fine Gael (actually does rhyme with fail), and they each tend to get about 40 per cent of the vote, forming a majority coalition with one of the minor parties.

Still, the mood among the populace is similar – people are struggling and unhappy with the mainstream candidates. Fianna Fail governed during the crash of 2008, and most people think they did a terrible job – Ireland effectively went bankrupt and had to be bailed out by the IMF and EU. The last election voters slammed Fianna Fail hard, and a coalition of Fine Gael and the Labour party took power. But they, too, have lost credibility with voters, trying to boost the government’s income with a series of extremely unpopular taxes.

Thus, just as in my native USA, dark-horse candidates are doing very well. Over there it means Donald Trump and Bernie Sanders, independents running under the nominal banner of the major parties; here it means third parties and independents.

Sinn Fein has been the biggest beneficiary of this, the left-wing nationalist party is now garnering about half as many votes as the major parties – not able to control a government yet, but getting there. They have a lot of baggage, though – they were the political arm of the IRA during the terrorism of the 1970s and 80s, and remain the only party operating in both Northern Ireland and the Republic. They went legitimate a long time ago – it’s been almost two decades since the Good Friday accords effectively ended the “Troubles,” and former terrorist like Martin McGuinness even had dinner with Queen Elizabeth recently. Younger voters see them as the legitimate political party they are, but older voters have not forgotten Sinn Fein’s past, and the mainstream parties have refused to work with them.

Independents and minor parties like the Anti-Austerity Alliance or the Social Democrats – won more candidates than any party at all, meaning that a plurality of people now elected are local candidates promising to undo the recent actions of the major parties.

As I write this – with 34 of the 40 election counts complete and 146 of the Dail’s 158 seats filled -- the two “major” parties are major no longer, not only closely matched but both severely diminished in numbers. Ordinarily garnering 35 to 50 per cent of the vote, this time they won about 25 per cent each, with Sinn Fein taking 13 per cent, and independents and minor parties making up most of the rest.

Now comes the tricky part: all these candidates have to form a coalition government, and whatever agreement they managed to hammer out, it will be the strangest government in this country’s history. There are a few possibilities:

1.) the two main parties, rivals as long as the nation has existed and descended from the two sides of Ireland’s civil war, will be forced to go into coalition with each other; if you are American, picture all the mainstream Republicans forming a government with Hillary Clinton to stop Donald Trump and Bernie Sanders.

2.) Sinn Fein and all the minor parties will be forced to form a sweeping left-wing coalition; it’s possible, but seems quite fragile;

3.) One of the two major parties will have to join forces with Sinn Fein, which they have vowed never to do;

4.) There will be a hung parliament, and we’ll have another election soon.

I’ll have more to say on this later, but for the moment one thing is clear: here as in many countries, voters are overthrowing the political establishment in favour of radical change. What kind of change they get remains to be seen.

There's another option which is looking likely as FF is refusing point blank to go into coalition with FG. Enda Kenny will be elected as Taoiseach (our leader is generally the head of the largest winning party but he is elected by the Dail as a whole) with the support of FF but FG will go into government on its own. This minority government will be able to handle most day to day stuff but will almost certainly stall at the next big budget and then we are probably looking at another election.

These are scary times with people fed up with the empty promises of the established parties who thumbed their noses at the people and did as they liked. People are now voting their emotions and reason is out the door. We reap what we sow. We are walking on thin ice.