Moving to an island 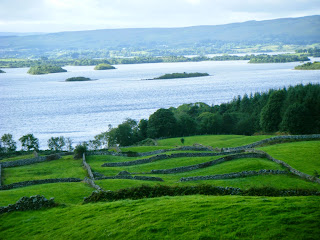 I heard an archival interview recently with a couple that moved from the city to one of the islands off the coast of Ireland decades ago, and were introduced to a very different world. All their neighbours, they discovered, lived in isolated self-sufficiency, taking care of their own gardens and animals, and few people used phones. Yet they had a powerful sense of community, helping each other out through the year and sharing whatever they had when a neighbour stopped by.

When they first moved there, they tried to send out invitations to a gathering, and found it took weeks; they had to walk to each house in turn, since no one used phones. At each house people would invite them in and insist they stay for dinner, and pile their arms full of whatever was ripe. At the time the rhubarb was ready, so they walked away with bushels of rhubarb from each house.

A tank of petrol lasted them months, since people had cars, but there was almost nothing to do with them.
Posted by Brian Kaller at 22:38